LEXINGTON, Ky. (Dec. 3, 2020) — Like many students who start at the University of Kentucky, Danielle Duncan didn’t know exactly what she wanted to be when she grew up.

She tried a few paths; she started down a major in public health before applying to the UK College of Nursing, but even then, she still had doubts.

“I really thought I chose the wrong major,” Duncan said. “I thought, maybe this isn’t what I want to do.”

After a particularly tough day in the clinic, Duncan was ready to quit. But her faculty advisor put her in touch with wellness counselors within her college who helped connect her with on-campus resources.

“The professors in the college are super invested in their students,” Duncan said. “They’re not going to let someone fall through the cracks. As soon as they heard I wanted to drop out, they went into game mode.” The wellness counselors helped her come up with a strategy for if she ever began to feel overwhelmed again. Duncan even got a phone call from the dean of the college to ask what she felt she needed to be successful.

Duncan carried on with her studies and spent several semesters working in various adult care areas throughout UK HealthCare. But it wasn’t until she did a rotation in Kentucky Children’s Hospital that Duncan discovered her passion for working with children. Once she found her place, all of her doubts and misconceptions about the field of nursing disappeared.

“I was running from it at first,” she said. “I wanted to be a doctor or a surgeon. I thought nursing was bottom of the totem pole. But when I got into the field, I thought ‘that’s completely wrong’. The entire stigma of nursing is the opposite. We’re the ones in the patient rooms. We’re the ones there 24/7.”

Looking back on her time at UK, Duncan is proud that she asked for help and encourages other students to do the same. After graduation, she’ll start her new job at Kentucky Children’s Hospital where she wants to be there for her patients the way that others were there for her. 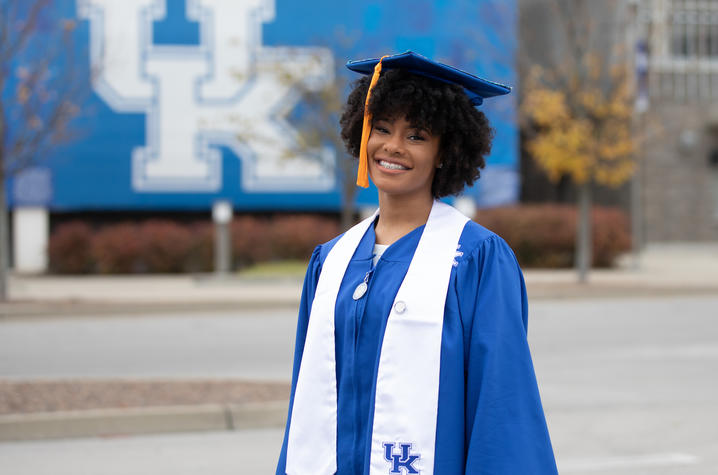 Danielle graduates this December and will be starting her nursing career at Kentucky Children's Hospital. Photo by Mark Cornelison | UK Photo, taken in accordance with social distancing guidelines.