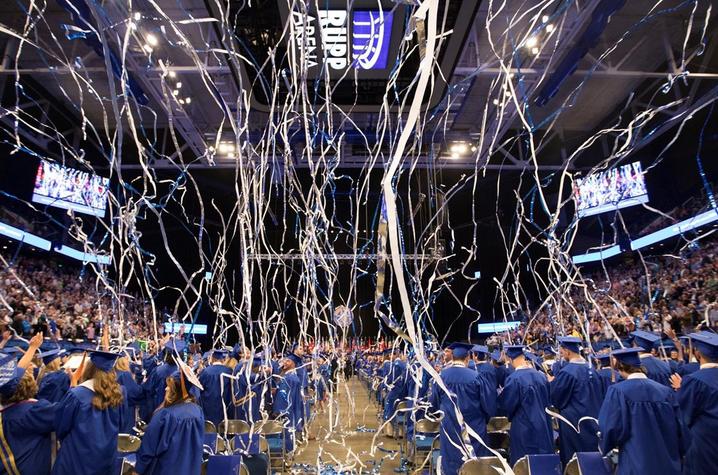 LEXINGTON, Ky. (Oct. 18, 2019) — The steady progression of academic achievement for the University of Kentucky Athletics Department continues. Wildcat student-athletes broke one graduation rate school record and tied another in an annual report released Wednesday by the National Collegiate Athletic Association.

“Our student-athletes make us proud in the way they pursue an education and a degree at our world-class institution while competing at the highest level of college athletics,” Athletics Director Mitch Barnhart said. “It is our responsibility to equip them with the resources they need to do that. I am thankful for the commitment our student-athletes make to academics and the support our coaches, staff, and CATS counselors and tutors provide along their path.”

UK’s NCAA Graduation Success Rate (GSR), a four-year composite statistic for the freshman classes of 2009-10 through 2012-13, was 91%. That tops the previous school record of 88% set last season, continuing UK Athletics’ streak of breaking or tying the mark every year since the NCAA began tracking the statistic in 2005.

“These outstanding graduation rates highlight a foundational component of the Kentucky student-athlete experience, and serve as evidence of our commitment to comprehensive excellence,” Executive Associate Athletics Director for Student-Athlete Experience Jason Cummins said. “Our students learn from a world-class faculty in the pursuit of life-changing knowledge, one of our department’s five core values.”

The GSR includes all scholarship student-athletes who are on scholarship their first semester of enrollment. Athletes who transfer or depart for the professional ranks in good standing do not count against the school's GSR. Schools also are allowed to count incoming transfers and January enrollees who subsequently graduate toward the GSR.

Here are UK Athletics’ GSR scores in the 15-year history of the measure.

The Federal Graduation Rate (FGR) is also a four-year composite statistic for freshman classes from 2009-10 through 2012-13. UK’s latest FGR mark is 61%, tying the previous record set last season. Data for this statistic is available since 1991.

In the FGR, student-athletes who transfer or depart early for the professional ranks count as non-graduates, regardless of their academic standing or subsequent graduation from another institution. Incoming transfer students, from junior college or four-year schools, who graduate at UK are not counted as graduates. These factors account for the difference between the FGR and the NCAA GSR.

With those record graduation rates, 99 Wildcats walked across the stage and received diplomas during the 2018-19 academic year alone, including 49 who graduated with honors. UK student-athletes are also receiving high marks in the classroom combining to surpass the department’s goal of a 3.0 grade-point average in 14 consecutive semesters.