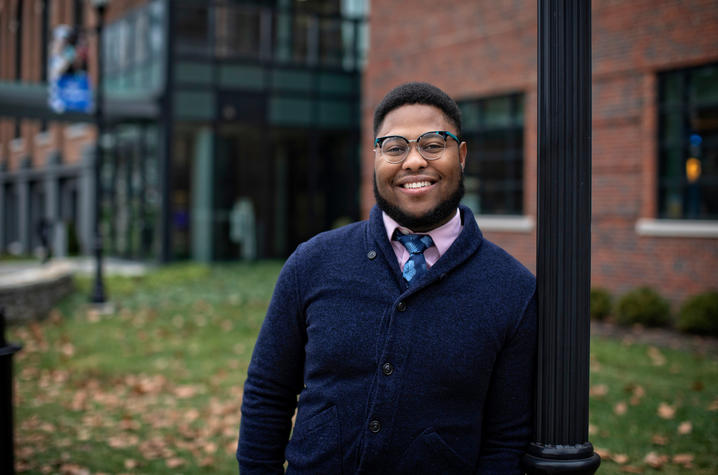 Daniel Beasley, a UK College of Social Work graduate, will address the Class of 2019 as one of two selected student speakers. Mark Cornelison | UK Photo.

LEXINGTON, Ky. (Dec. 18, 2019) — For some, going to college after high school is a no-brainer. For Daniel Beasley, that was the plan. But life doesn't always go according to plan.

Pursuing higher education would present a unique set of challenges for him.

The University of Kentucky graduate comes from a family of scholars. Beasley's mother holds a master's degree and works as a speech pathologist, and his father has an associate degree. On top of that, each of his eight brothers and two sisters hold degrees — ranging from associate to doctoral.

"I guess you could say we have a legacy of seeking higher education," Beasley said. "It's kind of a requirement in our house that you finish high school and go to college."

Despite appearing to have his future mapped out, the Elizabethtown native is anything but a traditional college student.

Upon graduating from high school in 2007, Beasley began his journey to earn a bachelor's degree. College didn't exactly meet his high expectations. Beasley quickly felt ill-prepared and took a step back from his studies.

But it wasn't long before he started going to school again part time — picking up a class here and there. One such class was in social work at Bluegrass Community and Technical College. The course was suggested to Beasley by a friend who knew of his compassionate ways.

"It changed my life. I fell in love almost immediately. I've always cared very deeply about policy and politics, and I found that social work was an area where I wouldn't have to work the same job for the rest of my life."

With life and work experience under his belt, Beasley felt more than prepared to give school a second chance. Once he started taking classes, he didn't stop there. Beasley's passion for giving back was undeniable — in and out for the classroom.

Between pursuing his undergraduate degree in social work, Beasley worked two jobs. As an employee at Beyond Birth Comprehensive Recovery Center, he helps provide recovery services to mothers battling substance use disorder. Beasley also volunteers within the religious community, as well as sings in choirs around Lexington.

"There is never enough time," Beasley joked. "It all keeps me really busy."

And if that wasn't enough, Beasley was accepted into the University Scholars Program. The opportunity allowed him to integrate his undergraduate and graduate courses of study in a single continuous program culminating in both a bachelor's and a master's degree.

Moments before accepting his diploma, Beasley will address the Class of 2019 as the selected student speaker for one of two Commencement Ceremonies Friday, Dec. 20. But that won't be the last time he crosses the Rupp Arena stage. In May 2021, he will proudly receive his master's degree. One day, Beasley said, he might even pursue a doctoral degree.

Beasley gravitated toward the world of social work because of his inner calling to serve others. And the field blended well with his keen sense of faith. He is heavily involved at Bluegrass United Church of Christ as "a young person serving as an elder" and caring for the congregation. Additionally, Beasley works in an organization at St. Paul's Catholic Church that is doing work within the community to bring different faith groups together to think about solving problems.

"I write papers and talk to people often about a scripture in the Old Testament, Micah 6:8, which talks about doing justice, showing mercy and love to people, and I think that social work really embodies Micah 6:8," Beasley said. "That is really the driving force behind anything that I do related to social work and the work I will do in the future."

Beasley has always been a go-getter, but he credits the College of Social Work, for giving him the skills and confidence to succeed.

"This program at UK has fostered and nurtured me and has been phenomenal for me on so many different levels. I always think about all the various professors and faculty that have provided amazing amounts of support and guidance over the years," he continued. "Dean (Jay) Miller has been an incredible mentor and person that has provided guidance to me that I am sure I wouldn't have got from someone else."

Though the CoSW program has been challenging and rigorous at times, Beasley said he would certainly recommend it to others. Based on his experiences at UK — between the faculty, classmates and classes — Beasley is convinced others will benefit greatly, just as he did, from being involved in the program.

After graduation, Beasley plans to continue his work at the women's recovery center. He hopes to eventually find his way to Frankfort or Washington, D.C., to work on changing policy and advocating on behalf of social workers everywhere.

"I am grateful for the journey because although at times it was incredibly difficult and there were times I was ready to hang it up, there were so many people in my life that have provided guidance and support that has gotten me through to this point," Beasley said. "Even though it has taken 10ish years, I've learned and grown in a way that will make a difference in the way that I serve people after graduation is over."