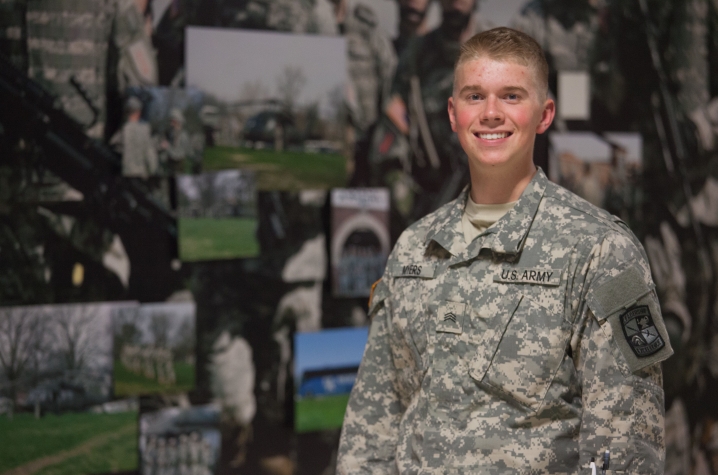 LEXINGTON, Ky. (Dec. 1, 2014) — Drew Myers is a University of Kentucky psychology major and award-winning Army ROTC cadet whose hobbies range from hunting and fishing to playing the ukulele. His primary academic and professional interest is in the field of human factors — a combination of human psychology and product design.

Myers clearly has no problem reconciling such differences; he doesn’t just want to learn to fly helicopters, he wants to design a better cockpit.

After graduating from Oldham County High School, Myers considered pursuing his interests through the Air Force Academy, but eventually decided to go the civilian route at Embry Riddle Aeronautical University in Florida. While Myers says he loved his time at Riddle, he left after three semesters to find better — and perhaps more rewarding — ways of funding his education.

“I came back to Kentucky to get in-state tuition, and I looked at the military because my dad always said if I got a full scholarship, he’d buy me whatever car I wanted,” Myers said. “After a while I realized I was mature enough to realize how important it was to have my tuition paid for.”

Myers participated in junior ROTC at his high school, and while he excelled in and enjoyed the program, he didn’t consider joining ROTC at the college level until coming to UK. Nevertheless, in the summer of 2014 Myers participated in the Leader’s Training Course (LTC), a four-week accelerated training program at Fort Knox.

During the extensive training of the program, Myers was told in passing that he was a candidate for top cadet. Cadets were scored on training areas such as basic rifle marksmanship and land navigation, and the lieutenants assessed them with leadership scores based on interactions during exercises.

Although told he might be a long shot for the honor, Myers was awarded top cadet, meaning he got to lead all 246 cadets for the program’s graduation.

“I also got to salute a general, which was the best part. I was super excited about that. I was really lucky and privileged to get top cadet,” he said.

Myers went through similar changes in his academic pursuits, beginning in aerospace engineering at Riddle and switching to human factors before settling into psychology at UK. He still plans to pursue human factors through graduate study after earning his bachelor’s.

“[Human factors] deals with how people interact with products, how to do testing and improve design,” said Myers. “You can give people the first generation of a product, see what they like and don’t like, and change the product from there.”

According to Myers, human factors is a growing industry with application ranging from developing an ergonomic pencil that reduces hand strain to designing a NASA spaceship. His goal is to be involved in cockpit design.

“Human factors is concerned with where to put what button, how to help pilots pay attention and work effectively. I want to work in the aerospace industry and make things easier to use,” Myers explained.

“I really enjoy playing, but I enjoy performing in front of people as well. I do it whenever I can,” he said.

Now Myers is in a leadership role in Army ROTC at UK, teaching basic skills to freshmen cadets. He says he was overwhelmed at first by the prospect of teaching skills he had only recently learned himself, but now Myers appreciates the opportunities provided by his leadership position.

“This is stuff I learned over the summer, but I like that I’ve had to teach it. I’ve never had to teach anybody, and I learn more in teaching the class than I did during the summer. I learn a lot more about myself, my leadership style and my teaching style,” he explained.

If the past is any indicator, Myers will soon have more talents and interests to add to his diverse repertoire.