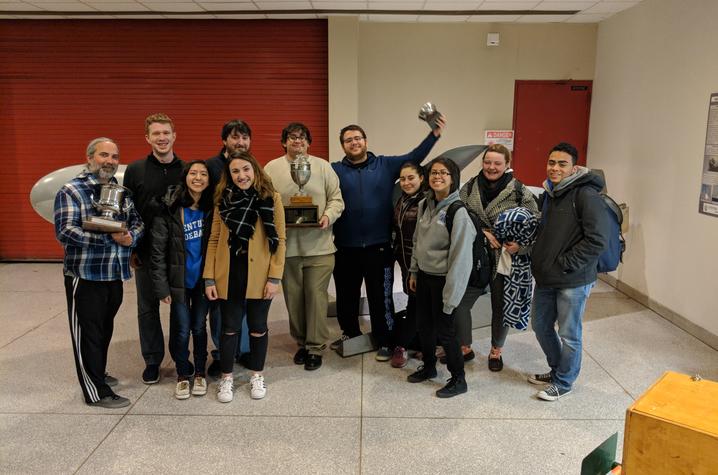 The young UK Debate Team continues to build a case as one of the top five teams in the country.

LEXINGTON, Ky. (Jan. 30, 2018) — The University of Kentucky Debate Team housed in the College of Communication and Information swept two tournaments with impressive victories, placing first and second in two of the nation’s most reputable tournaments.

The successful team was split between three tournaments recently competing in simultaneous tournaments at the U.S. Naval Academy, Dartmouth Round Robin and Indiana University.

During a three-day competition in the Naval Academy Tournament, the duo of Amar Adam and Theodore Noparstack once again took first. The tournament featured nearly 100 teams from 16 states. The two champions defeated a nationally top-ranked team from Trinity University in a 2-1 decision in the final round. Earlier in the tournament, Kentucky won victories over a number of powerhouse competitors including Georgetown University, Dartmouth College and the University of Michigan.

The team’s second impressive performance came during the Dartmouth Round Robin tournament with a strong second place finish by competitors Dan Bannister and Anthony Trufanov.

This was Kentucky’s strongest performance at the Dartmouth Round Robin Tournament and only the fourth time UK has been invited to compete. Only the top seven nationally ranked teams are invited to participate in the tournament, making it one of the nation’s top competitions.

The up-and-coming pair of Genevieve Hackman and Jacinda Rivas worked their way to a fourth-place finish at a tournament at Indiana University.

Coach David Arnett summed up the past weeks’ events by saying, “As a coach you’re a lot less concerned with how the season starts than with how it finishes. You want to see your team grow and improve throughout the year and my takeaway is that’s exactly what we’re doing. Dan (Bannister) and Anthony (Trufanov) taking second place at Dartmouth is huge for a pair of sophomores. Our seniors Amar (Adam) and Theo (Noparstack) went to Navy and won a three-day marathon that included teams from 17 states and some of the best of the best like Georgetown and Michigan. Gen (Hackman) and Jacinda (Rivas) reaching the final four at Indiana was a huge step for them. My belief has always been that the best teams have a group that works hard and for each other. I think we have that and hope we can keep focused as we head into the national championship portion of the season.”

While this team may be young, it continues to build a case as one of the top five teams in the country. Kentucky finishes the regular season with a tournament at the University of Texas at Austin in February.