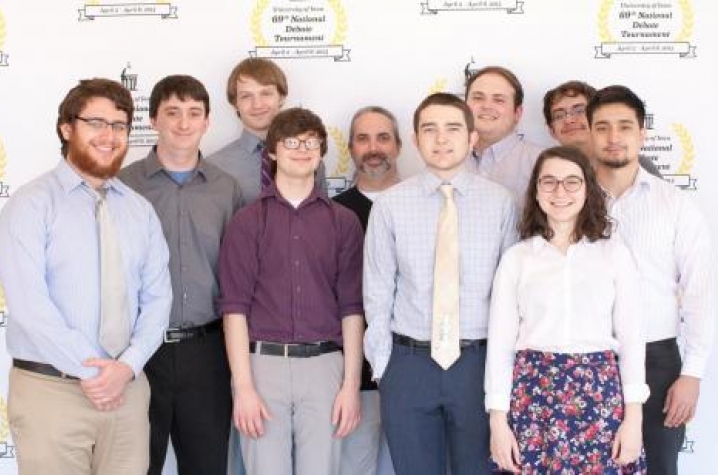 LEXINGTON, Ky. (Sept. 8, 2015) — The University of Kentucky debate team will begin another competitive season in less than two weeks, and the expectations for the team have not been this high since the mid-'90s.

The team returns everyone from a squad ranked 11th in the country last year. The squad returns two pairs (Donald Grasse/Theo Noparstak and Jonathan Geldof/Ava Vargason) from the sweet 16 of the national debate tournament last March.

A strong research culture and aggressive recruiting campaign have given the team momentum over the last few years.

Research for the annual topic began in June. The team arrived a week before classes and spent 70 hours in the office preparing for the season.

Recruiting is a year round effort. This month alone, UK debate team director Dave Arnett will travel to North Carolina and Dallas to watch some of the best high school debaters in the country compete.

The debate team is made up of members from all over the country. Just this season the team added three great recruits in Calen Martin from Louisiana, Cameron Baller from Michigan and Jacinda Rivas from Illinois.

The team will begin its season at Georgia State Sept. 19-21 where over a 100 teams from across the country will be represented.

Later in the fall semester, the UK debate team will compete at Harvard in October and at Wake Forest in November.

For more information about the UK debate team visit their website.