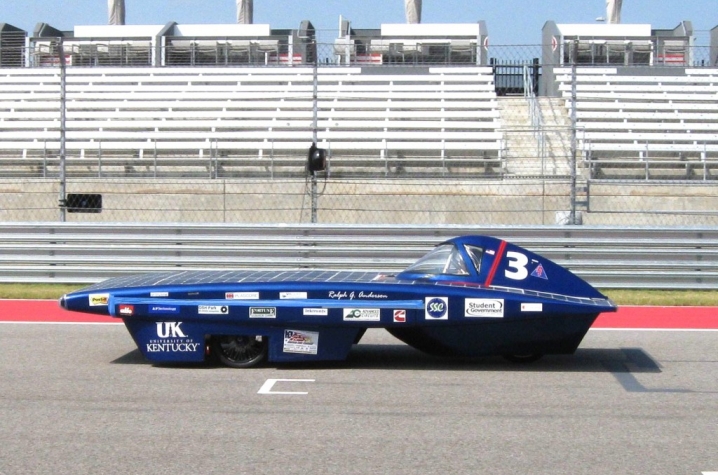 LEXINGTON, Ky. (Jan. 20, 2015) — The University of Kentucky Solar Car Team, a student-led organization within the College of Engineering, has been announced the winner of the Fluke Connect Student Contest, which tested the skills, innovation and business application of student teams across the nation.

The UK Solar Car Team designed a project that conducted live testing of performance parameters on the UK Solar Car using Fluke Connect, Fluke Corporation's wireless test tools that connect to smartphones. Their objective was to increase the efficiency of the UK Solar Car by at least 10 percent, while saving time by quickly finding and minimizing inefficient components.

According to a Fluke Corporation news release, they saw a 16 percent decrease in idle energy consumption and 5.5 percent increase in dynamic energy efficiency.

"The University of Kentucky Solar Car Team strives to use the latest technology on their solar powered vehicle. The team was able to use the new wireless meters to monitor critical values, collect and send data to smart phones, as well as use a thermal imaging camera to diagnose and troubleshoot electrical issues," said Matthew Morgan, manager of external education programs at West Kentucky Community and Technical College and an advisor to the Solar Car Team.

Members of the UK Solar Car Team involved in the contest include:

·      Daniel Cambron, an electrical engineering and computer engineering senior, member of the Honors Program and University Scholar, from Glasgow, Kentucky;

·      Joshua Morgan, an electrical engineering and computer engineering senior and member of the Honors Program, from Benton, Kentucky;

·      Chris Heintz, a mechanical engineering senior and member of the Honors Program, from Chesterland, Ohio.

The team members, as well as advisor Morgan, will receive a paid trip to Fluke headquarters in north Seattle in March to spend a day meeting with Fluke executive and engineering leadership, tour Fluke engineering and manufacturing, and see the Boeing manufacturing facility and Future of Flight Aviation Center, according the news release.

The team will also receive $1,000 worth of Fluke tools, and the Fluke Connect tools used in the contest submission, worth approximately $2,500.

"The UK Solar Car Team was able to demonstrate innovation, creativity, and put together a professional presentation resulting in winning the contest. We are excited about getting to go to Seattle to tour the Fluke Corporation headquarters," said Morgan. "The team is thankful to receive the Fluke tools that will be used on both the current and future generations of the University of Kentucky solar vehicles, and I am proud of the team for their hard work.“

Cambron is also optimistic of the impact the Fluke contest win will have on his own team.

"Moving forward, the team is excited about the opportunity to visit the Fluke headquarters in March, and will be using the spring semester to gear up for the annual Formula Sun Grand Prix race in July. We have high hopes that the improvements made during the Fluke contest will translate into a strong showing at the race," Cambron said.

View the team's presentation and video outlining their work at: https://www.facebook.com/fluke.corporation/app_608345125854781.

The UK Solar Car Team is one of the largest student engineering organizations on campus. The team works during the school year to construct solar vehicles, and visit schools and events across the Commonwealth to inform and spread the awareness of efficient alternative energies. The team also participates in national competitions which include the Formula Sun Grand Prix, hosted by the American Solar Challenge. For more information about the UK Solar Car Team, visit http://www.engr.uky.edu/solarcar/.