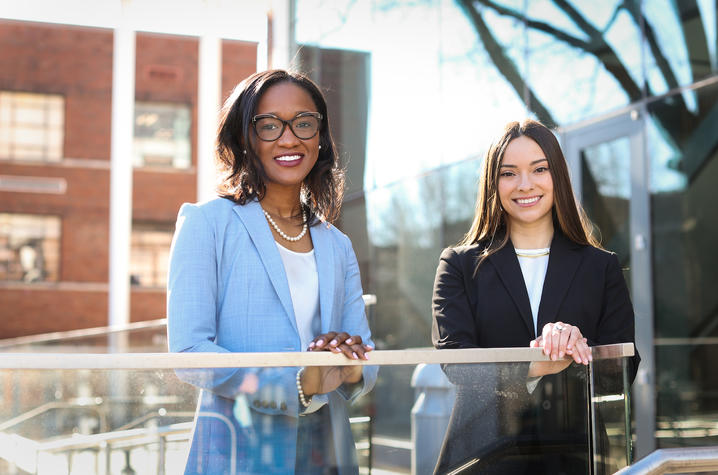 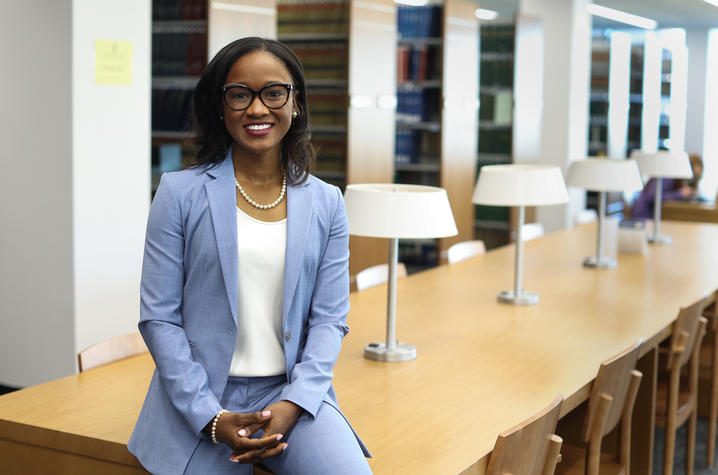 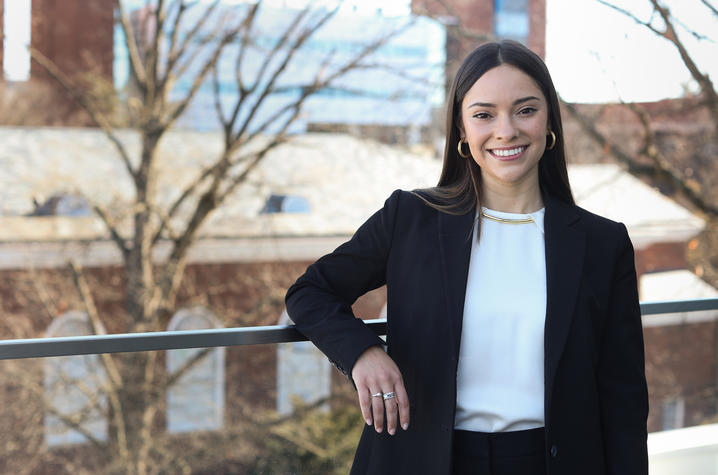 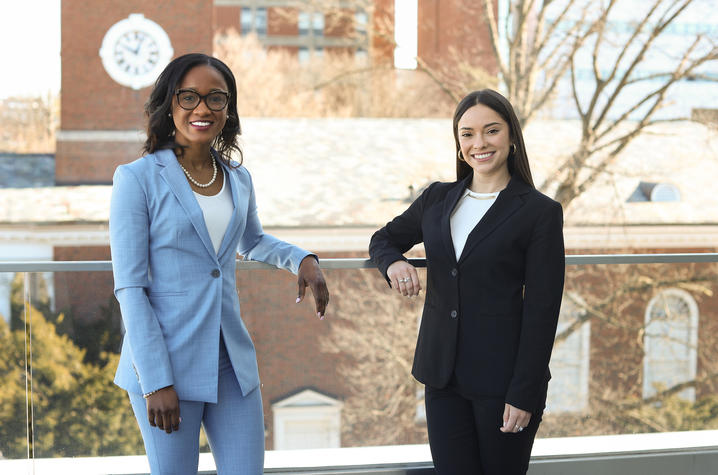 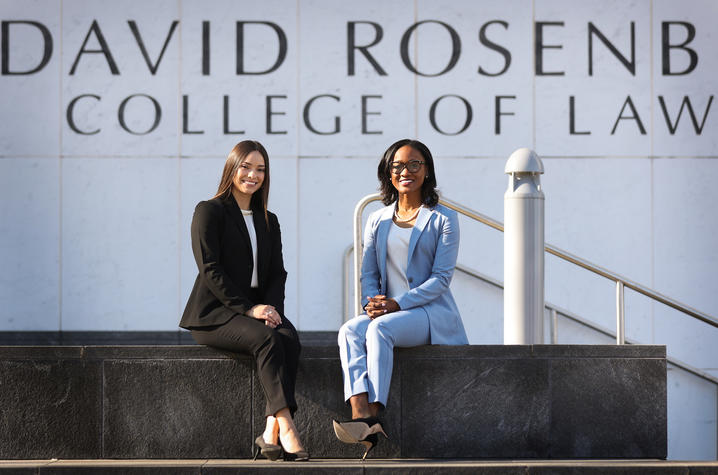 LEXINGTON, Ky. (Feb. 28, 2022) — When Kelly Daniel and Jocelyn Lucero started law school in the fall of 2019, the world, and their lives, looked a bit different. They had anticipated the challenges that the next three years would bring, but could never have imagined the rollercoaster of moments that would take them to the finish line.

Daniel and Lucero are leaving their mark on the history of the J. David Rosenberg College of Law, holding the distinction of being the first two women of color to simultaneously hold two prestigious student law journal leadership positions.

Lucero, from Paris, Kentucky, is wrapping up her role as the Kentucky Journal of Equine, Agriculture and Natural Resources Law’s (KJEANRL) editor-in-chief. During her time at UK, she has been involved with the Latino Law Student Association and organized two fundraisers for Kentucky Refugee Ministries.

Their terms as editors-in-chief have come to an end, and as they help to train the new teams taking the helm, they took a moment to reflect on what they have learned about the law, leadership and themselves.

UKNow: You are both first-generation college graduates, and soon, law school graduates. What inspired you to go to law school?

Daniel: What sparked my interest in law school was seeing what the legal system did to my classmates. I was eager to learn about ways to help to rectify the wrongs within the criminal justice system. Ultimately, I decided to come to law school because when I was a senior in high school, my college-enrolled brother found himself in an altercation that led to him being charged with first-degree murder. At the age of 17, despite having little knowledge of the legal system, I soon found myself immersed in my brother’s case and attempting to comprehend legal jargon. I was amazed by the legal representation he received and knew his circumstance would have turned out a lot different had he received ineffective assistance. I came to law school to learn how to provide equally effective representation and to be able to argue the merits of a case.

Lucero: My sights have been set on law school since the fourth grade. It was around that time that my mother started the immigration process, for the second time, to bring my grandmother to the U.S. Both of my parents are from Mexico, so I was familiar with the immigration system in the U.S., and its shortcomings, from a young age. I soon found out there were many families, just like mine, who were frustrated with the immigration system because it seemed that they would never get to see their loved ones again. To make matters worse, there were very few advocates who understood this frustration. I wanted to grow up and be an advocate for these families and that meant going to law school.

UKNow: Why did you choose the J. David Rosenberg College of Law to continue your education?

Daniel: I came to UK because I wanted to experience being away from home for an extended period of time. During my second year of college, I studied abroad in Prague, which allowed me to have an academic experience uninterrupted by the familial duties that are ever so present for first-generation students. As a result of my time abroad, I made an earnest effort to apply to law schools away from home. I decided to enroll at UK because it genuinely felt like the university believed in my ability to succeed, which was evident in the tailored nature of my acceptance letter, detailing numerous components of my application. After an expansive campus visit and a tour of Lexington during Admitted Students Day — I was sold.

Lucero: I was in between two law schools and ultimately ended up choosing UK because I thought it was the best fit for me. When I reflected on my undergrad experience, I realized I enjoyed it so much because I was able to cultivate meaningful relationships with my professors. When I talked with UK law students, they all spoke so highly of the professors that I knew UK was where I needed to be. I am happy to say that I was not mistaken. All of my professors, including my faculty advisor for KJEANRL, have been nothing but supportive and I feel as though it really does make such a difference in someone’s law school experience. Law school is hard and it has been a difficult journey for me, but knowing that there are people who want to see you succeed gives you the strength to keep going.

UKNow: How would you describe your law school experience?

Daniel: My law school experience has been intellectually stimulating, all while being chaotic and humbling at the same time — especially while learning during a global pandemic. I imagine my experience is no different than the majority of my peers. We just continue to adapt to our circumstances and put forth a good faith effort towards our studies and various obligations.

UKNow: What was it like leading your fellow classmates as editor-in-chief, and what did it mean to you personally to hold that title?

Daniel: Leading an organization that has been around for over a century as editor-in-chief was exhilarating. However, it is a daunting task, as it requires you to grasp the processes of the role quickly. As editor-in-chief, you have a responsibility as a leader of the institution, and a duty to meet the needs of your organization and the individuals you are leading. Holding such a title meant that there would be people depending on you to perform exceptionally well, as the editors-in-chief represent the institution. It also meant that I would be inspiring minority and/or first-generation law students to break similar barriers for years to come.

Lucero: It was such an honor for me to hold this position because to me it meant that my peers thought I was the best person for the job. The fact that they trusted me to hold this position meant a lot to me. Which is why during my time as editor-in-chief I tried to support all the editorial board members in any way I could. I wanted them to know that I was here if they had any issues or if they just needed to vent. They helped me realize my potential, so why wouldn’t I return the favor?

UKNow: Law school is challenging, not to mention the impact that the pandemic has had on your time here. What is the biggest lesson or two you have learned?

Daniel: One of the biggest lessons I have learned is the importance of being resilient. There will always be obstacles that stand in the way of your ability to thrive, especially if you are a first-generation student. Unfortunately, nothing can prevent the obstacles from occurring, but maintaining a positive headspace has helped mitigate stressful situations. Another lesson I have learned is the importance of having a work-life balance. I have found that I have a much firmer grasp of material when I have taken a day off to visit the Muhammad Ali Center, or take a golf lesson, than when I have not left my apartment for days on end to immerse myself in legal doctrine completely.

Lucero: I’ve learned that it’s ok to not do everything yourself. It’s ok to lean on others when you need to and its ok to ask for help.  Law school is challenging and it’s important to remember that nobody can be perfect. At the end of the day, we are all humans first and we make mistakes. That’s why I am so thankful to have worked with my executive editor, Shelby Lamar. She has been my right-hand woman through this entire process. If it weren’t for her help, I don’t think I could have done my job and remained sane.

UKNow: Being a student leader means devoting a lot of time outside of the classroom, your study time, personal life, etc. How has being involved help to prepare you for your future careers, and what has it taught you about yourself?

Daniel: As a student leader, I learned that planning ahead helps to prepare you for the unanticipated events that occur along the way and it makes multitasking feasible — without having to experience burnout. I plan to keep this at the forefront of my mind in my practice and remember the value in getting work done days prior to deadlines.

Lucero: This entire experience has helped me learn that I am capable of a lot more than I thought I was. I have had to handle multiple problems that at first, I had no idea how to even begin to address, but I persevered. Lawyers have to do just that, solve problems, so this whole experience has helped me hone in on the skills I will need to be successful in my career.

Upon graduation, Daniel will be working as a Natural Resources associate in the Morgantown, West Virginia office of Steptoe & Johnson, PLLC, followed in 2023 with a clerkship for U.S. District Court Judge Katherine Menendez in Minnesota. Lucero will be giving back to her community and low-income immigrant families through an associate position at Musillo Unkenholt Immigration Law.

About the Kentucky Law Journal (KLJ)

The KLJ is the tenth oldest law review published by the nation's law schools. Publication has been continuous since 1881. Four issues are published annually by the UK Rosenberg College of Law. The journal is edited entirely by a student editorial board, with guidance from a faculty advisor. Each issue contains articles written by prominent national scholars and notes written by journal members encompassing a broad range of legal topics.

About the Kentucky Journal of Equine, Agriculture, and Natural Resources Law (KJEANRL)

The KJEANRL is a multi-disciplinary journal of law, science and policy published twice annually by the UK Rosenberg College of Law. KJEANRL is edited entirely by students in the college. A forum for articles by practitioners, academicians, policy-makers and other professionals throughout the United States and abroad, the journal welcomes original manuscripts focusing on the legal, policy and ethical issues related to the environment, natural resources, land use and energy. Shorter discussion pieces, descriptions of creative solutions to persistent problems and commentary on policy and politics are also suitable for publication in the Journal. Each issue also includes notes written by journal staff members.