Video Produced by UK Public Relations and Strategic Communications and Marketing and Brand Strategy. To view captions for this video, push play and click on the CC icon in the bottom right-hand corner of the screen. If using a mobile device, click on the "thought bubble" in the same area.

LEXINGTON, Ky. (Dec. 13, 2022) — It’s a feeling of accomplishment unlike any other — walking across the Commencement stage, outstretched hand reaching for that coveted diploma.

Savannah Lewis has been envisioning that moment for quite some time. Now, she’s just a few days away from becoming a University of Kentucky graduate.

As a young girl navigating small-town life in Thomson, Georgia, Lewis certainly didn’t know what she wanted to be when she grew up. But she always had a strong interest in math and science — more specifically, a fascination with electricity and astronomy.

Lewis often wondered, “how can I channel that passion into purpose?”

“Because there are hardly any Black engineers in society, it’s more difficult for Black kids to see that as a possibility for themselves,” she said. “There are kids that have no idea what they are passionate about, because they don’t have the resources available to be exposed to it.”

Lewis lacked role models in STEM fields, so she didn’t quite understand the magnitude of their importance. But she did have two sources of inspiration — two influential people who taught her the power of perseverance.

“When I was in middle school, my parents went back to school to earn their associate degrees,” Lewis continued. “That really inspired me, because my parents didn’t put an expiration date on their dreams.”

So, she decided to chase hers.

Lewis dedicated herself in school, and when it came time to decide where to continue her education, she wanted a place that would foster her wildest ambitions — to become an engineer.

As a student who often excelled, Lewis was excited for this next challenge. But life away from home proved more difficult than she imagined.

“When I first got to college, it was very hard. I was seven hours away from my family with hardly any new friends,” Lewis recalled. “Not to mention, I went straight from making all A’s in high school to failing exams in college. It was very rough.”

As she struggled with finding her place and passing pre-calculus, Lewis began to question her future as an engineer. But she continued studying for quizzes, utilized tutoring resources and finished homework before the due dates — raising her grade from a “D” to an “A.”

“Knowing that I did it is all the confidence I need to take on the world. In my first year, I saw all those courses I needed to take, and it seemed nearly impossible at first glance. However, I became a successful student in my own way,” Lewis said. “Engineering was a big learning curve for me, so I could not take 18+ credit hours or remain a A-B student each semester. However, I took as many classes as I could handle, I asked for help, and I took every opportunity to be involved. From that alone, I know that I can always be successful just by being myself and sticking to a plan.”

Lewis has reached many milestones throughout her engineering journey, from interning with Lockheed Martin Space Systems in Sunnyvale, California, to being awarded the 2020 Outstanding Junior Award from the Department of Electrical and Computer Engineering.

As the first person in her family to earn a bachelor’s degree and study engineering, Lewis describes the feeling as daunting yet rewarding.

Now, when she reflects on the question, “what do you want to be when you grow up?,” she is steadfast in her response. She no longer wants to be an engineer — she is one.

After graduation, Lewis will be joining Beam Suntory (Jim Beam Brands) in Frankfort, Kentucky, at their Old Grand Dad Plant as a process engineer. “Through Beam, I have been able to grow as an engineer in ways I never imagined before even receiving a degree,” she said. “Now I’ll be joining them full-time in January. I’m super excited about that and looking forward to my first professional role.”

But Lewis’ aspirations reach far beyond her own personal ambitions. She also wants to help young students realize their potential.

One day, Lewis hopes to start a STEM program for students in her hometown. The program would consist of educational field trips and college preparation. Lewis also wants to start a scholarship fund for graduating seniors at her church.

Ultimately, she believes her journey could — and should — inspire systemic change.

“If you can dream about it — you can do it. Just because you may be a minority or different than the ‘status quo’ does not mean you aren't worthy of the end goal,” Lewis said. “Although there will be more challenges just because of your differences, possessing a career in STEM is extremely valuable. The opportunities available with a STEM degree are endless and very rewarding. I say, go for it.” 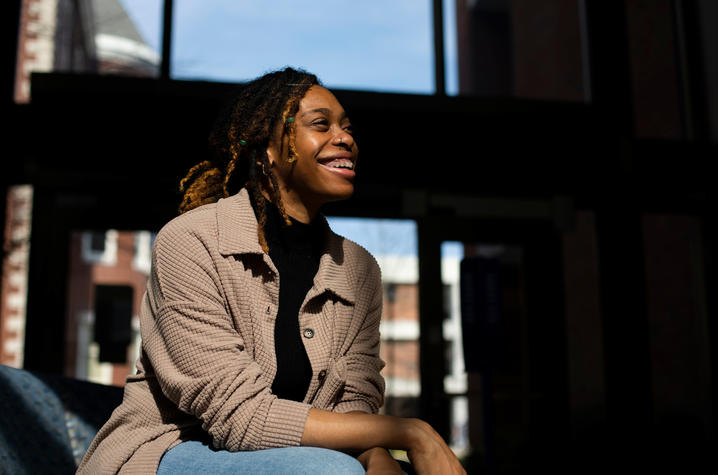 As the first person in her family to earn a bachelor’s degree and study engineering, Savannah Lewis describes the feeling as daunting yet rewarding. Pete Comparoni | UK Photo.