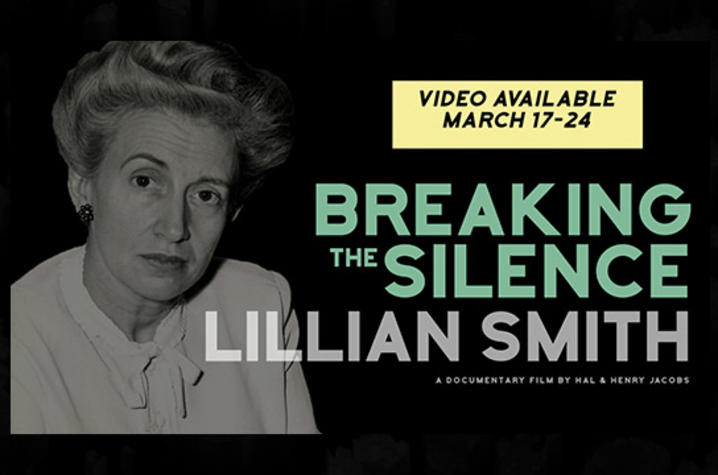 A virtual screening of the film will be available to the public March 17-24. UK will host a Q&A session March 24.

LEXINGTON, Ky. (March 15, 2021) — In celebration of Women’s History Month, the University of Kentucky Appalachian Center and the UK Lewis Honors College will host a virtual screening and discussion on a film about writer and social justice advocate Lillian Smith.

“Lillian Smith: Breaking the Silence” will be available to the UK community and the public to watch March 17-24 here: https://lilliansmithdoc.com/private-screening-kentucky.

In addition to the film, a Q&A session and discussion will take place 3-4:15 p.m. Wednesday, March 24, on Zoom, featuring the filmmaker Hal Jacobs and actor Brenda Bynum. Attendees are encouraged to watch the film ahead of time and then join the discussion. Register here.

“We are so delighted to bring ‘Breaking the Silence: Lillian Smith’ to the UK community,” said Kathryn Engle, associate director of the UK Appalachian Center. “Her life and works crosscut the fields of Appalachian studies, gender and women's studies, queer studies, education, Southern studies, literature, civil rights history, and African American studies. In recognition of Women's History Month, we’re excited to celebrate women like Smith who have taken a stand against white supremacy and worked to make the region and the country a better place."

“Breaking the Silence” follows the life journey of Smith, a Southern white woman who emerged at the forefront of the debate on segregation in the South in the 1940s. She stood virtually alone in calling for an immediate end to segregation laws and practices. She was also an advocate for women's and gender equality. Smith authored many books and essays, including the highly acclaimed novels "Strange Fruit" (1944) and "Killers of the Dream" (1949).

The film was just named the 2021 winner of the Jack Spadaro Documentary Award from the Appalachian Studies Association this weekend.

“Lewis Honors College is thrilled to co-sponsor the discussion of this film and Smith's work, which confronted taboos against interracial romance and lesbian desire in the 1940s,” said Tara Tuttle, assistant dean for diversity, equity and inclusion in the Lewis Honors College. “As a queer white Southern woman writer, Smith’s refusal to comply with the expected erasures of love and desire that violated social norms and her condemnations of racism and segregation were not without risk. We hope members of the UK community will join us this Women's History Month as we learn more about Smith's career and convictions.”

Chelsea Brislin, associate director of the UK Gaines Center for the Humanities and faculty affiliate of the Appalachian Center, teaches a course on women in Appalachia. She says Appalachian women are often stereotyped, and learning about women like Smith is critical for recognizing the legacy of Appalachian women.

“In pop culture Appalachian women in particular have often been stereotyped as either the oversexualized Daisy Duke, or the overworked ‘mamaw’ figure,” Brislin said. “In this course on Appalachian women, we are working to fragment this dichotomy through examining real histories like Lillian Smith’s while studying the activism, resourcefulness and determination of Appalachian women like her throughout history.”

In addition to this month’s screening, UK Libraries has also purchased an institutional copy of the film to be used in future UK courses.

For more information, visit https://appalachiancenter.as.uky.edu/lillian-smith-breaking-silence-documentary-discussion or contact the Appalachian Center at 859-257-4852.