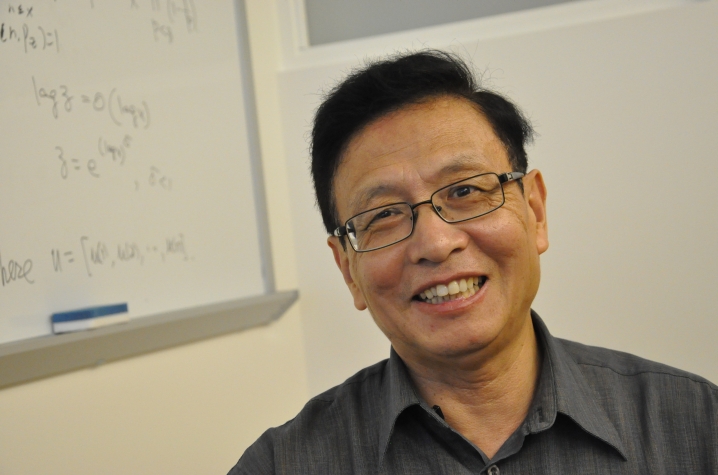 LEXINGTON, Ky. (Oct. 12, 2015) — Yitang Zhang — the mathematician who solved the bounded gap problem and spent many hours studying in University of Kentucky Libraries in the '90s — will deliver this year’s Hayden-Howard Lecture, hosted by the UK Department of Mathematics, at 4 p.m. Thursday, Oct. 15.

The event will take place in Room 110 of the White Hall Classroom Building.

The Hayden-Howard Lecture Series was established in 2001 to bring renowned research mathematicians to UK. The lecture was established by a friend of the Department of Mathematics and is named in honor of retired faculty members Thomas Hayden and Henry Howard.

This year’s lecturer, MacArthur Award-winning mathematics professor at the University of New Hampshire, specializes in number theory and is known for his breakthrough work on the bounded gap problem.

While he never went to school at UK, this will not be his first time on campus. Following his graduate work at Purdue University, Zhang lived in Lexington for a few years and managed the finances at a local Subway franchise. During that time he would also spend hours in the mathematics library at UK, reading journals on algebraic geometry and number theory.

Zhang was born in Shanghai in 1955, and demonstrated a desire to master mathematics from an early age. He studied at Peking University before pursuing further graduate study at Purdue, from which he earned his doctorate in algebraic geometry in 1991. Zhang’s thesis dealt with the Jacobian conjecture, a very challenging problem rarely approached by graduate students.

After receiving his degree, Zhang chose to pursue number theory concerned with deep questions about natural numbers — one, two, three, and so on — one of the most familiar parts of mathematics.

As detailed in a February 2015 profile in The New Yorker, Zhang struggled to find academic work after receiving his doctorate, leading to his time studying on campus and working at a Lexington Subway. In 1999, he accepted a lecturer position at the University of New Hampshire and continued to work on mathematical research, eventually turning his attention to bound gaps.

At one point, it appeared his dreams of mastering mathematics were falling by the wayside, but in July 2012, Zhang had a major breakthrough. He prepared his manuscript for publication and checked his results carefully before submitting it to Annals of Mathematics – one of the most prestigious mathematics journals. His paper, “Bounded Gaps Between Primes,” was published in 2013 and is considered a groundbreaking contribution to the field of number theory.

Following publication of his proof, Zhang was the subject of the aforementioned profile in The New Yorker, as well as the documentary “Counting from Infinity,” created by filmmaker George Csicsery for the Mathematical Sciences Research Institute in Berkeley, California.

Zhang’s result deals with prime numbers: natural numbers with no divisors but one and itself (such as two, three, five, seven and so on). Euclid’s twin prime conjecture is a famous unsolved problem which suggests there are infinitely many prime pairs which differ by two. The first two pairs of twin primes are first three and five, then five and seven.

After more than 2,000 years, mathematicians still do now know if there is an infinite number of such pairs.

Zhang was not able to show there are infinitely many pairs of primes which differ by two, but was able to prove that there are an infinite number of pairs that differ by, at most, 70 million. There has been an explosion of activity in the wake of Zhang’s proof, and research now shows that infinitely many pairs can be found that differ by 246 or less. Much of the progress following Zhang’s work was made by an international collaborative effort over the Internet known as Polymath8.

Zhang was awarded a MacArthur Fellowship in 2014 for this pioneering proof. His presentation for the Hayden-Howard Lecture, titled “Small gaps between primes,” will describe a breakthrough in the distribution of primes that led to his award-winning discovery.