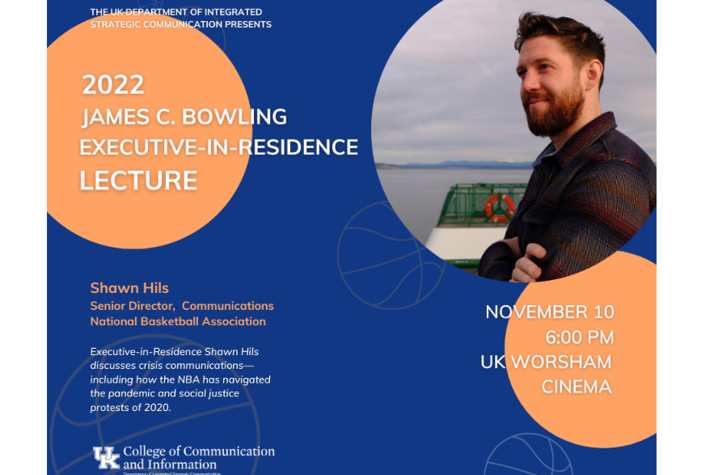 LEXINGTON, Ky. (Nov. 7, 2022) — Shawn Hils, senior director of the communications department and research and crisis communications lead for the National Basketball Association (NBA), will deliver the 2022 James C. Bowling Executive-in-Residence lecture 6 p.m. Thursday, Nov. 10, in the University of Kentucky’s Gatton Student Center Worsham Cinema. The program, which is free and open to the public, is sponsored by the UK Department of Integrated Strategic Communication and the College of Communication and Information. The 2022 talk marks the Bowling Lecture Series’ 23rd anniversary.

Hils’ lecture will discuss crisis communications, including how the NBA has navigated the pandemic and the social justice protests of 2020.

Shawn Hils serves as senior director in the communications department of the National Basketball Association in New York City, a global sports and media organization encompassing five professional sports leagues: the NBA, WNBA, NBA G League, NBA 2K League and Basketball Africa League. Since 2015, he has been charged with response management and specializes in research and crisis communications on both basketball and business matters.

Before joining the league in 2015, Hils served in senior roles in the U.S. Senate, on political campaigns and political committees, advising and developing strategy for candidates with national media attention in Ohio, Colorado and Washington, D.C. As special assistant in Sen. Mark Udall’s office and research director on Udall’s campaign, he advised the senator on policy and campaign strategy. At the Democratic National Committee, Hils served as deputy research director, leading a team of researchers in charge of reviewing the records of 18 presidential candidates.

Hils graduated from Wittenberg University in Ohio with a bachelor's degree in political science. He lives in Brooklyn and spends his time outside of work riding his motorcycle, backpacking and traveling with friends.

In addition to honoring the Bowling Lecturer-in-Residence, the series names an annual awardee for Excellence in Public Relations. This year's winner is Chip Polston, who spent 29 years with the Kentucky Lottery Corporation, 19 of those as vice president and senior vice president of communications, public relations and social responsibility.

Polston was originally hired as a host of the lottery’s nightly televised draw show in 1993. While hosting the evening draw show, he spent 14 years as Broadcast News Services manager at the University of Louisville. He also freelanced extensively in the region as producer/writer/talent for national clients such as CNN, Outback Steakhouse and UPS. On top of his extensive media relations and communications work, his passion project became working to help those in Kentucky who are negatively affected by problem gambling.

After a 29-year run at the Kentucky Lottery, Polston recently left the company to pursue a dream he’d had since high school: working full time in the television industry. KET recently named him as host of their Saturday evening flagship magazine show “Kentucky Life,” and he will host, write and produce for other programs on the network as well.

The series honors James C. Bowling, the late retired assistant chairman of Philip Morris Companies Inc. He attended UK and later served the university as a member of the UK Development Council. In addition to serving on several national boards, Bowling also worked with the UK College of Agriculture (now UK College of Agriculture, Food and Environment), UK Gatton College of Business and Economics and the UK Sanders-Brown Center on Aging.