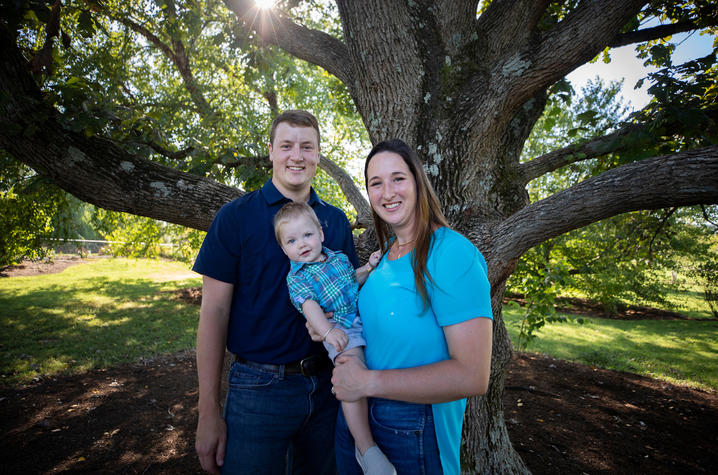 An aneurysm followed by a stroke led to a 56-day stay in Kentucky Children's Hospital for Rory McCamish.

LEXINGTON, Ky. (Sept. 4, 2019) – Betsey McCamish of Lexington got the phone call from her son's daycare no parent wants to receive. Her seven-month-old son Rory was found by his teachers, on the floor and unresponsive. Thinking it was an allergic reaction, they  quickly called 911 and he was transported to the Makenna David Pediatric Emergency Center at the University of Kentucky Chandler Hospital. Betsey's husband Tyler was across the country on a business trip when Betsey called him; he had to take an emergency flight and rent a car to meet Betsey at the hospital where they were given a harrowing diagnosis – Rory had an aneurysm burst and his brain was bleeding.

"Rory had a ruptured brain aneurysm that resulted in a subarachnoid hemorrhage," said Dr. Ashwin Krishna, medical director of the Kentucky Children's Hospital Pediatric Intensive Care Unit (PICU). "This is a rare thing in infants."

Rory needed emergency surgery to stop the artery from bleeding into his brain. Neurosurgeon Dr. Abdulnasser Alhajeri placed a coil inside Rory's artery and placed him on mechanical ventilation. Rory also had a drain placed in his head to monitor the pressure on his brain.

"Initially, Rory seemed to recover well," said Dr. Asha Shenoi, one of Rory's attending physicians in the PICU. "He experienced a few seizures, but he was getting better and doing well."

Rory developed some irritation that led to more bleeding and blood clots. After an emergency craniotomy by Dr. Brandon Miller and Dr. Stephen Grupke on Mother's Day, Rory had a severe stroke, and it was back to square one in terms of his recovery.

For Betsey and her husband Tyler, it was a nightmare. Rory spent 56 days in the hospital, 40 of which were in intensive care. But as agonizing as the experience was, Betsey and Tyler found solace in the doctors, nurses and staff of the PICU.

"Not only did they do their hourly checks, medicines, procedures, etc., but they gave us company and conversation, they played with Rory when we needed a break," said Betsey. "They coached us and educated us about his condition, they emotionally prepared us, were a shoulder to cry on when we needed it, they brought us coffee and blankets. They did everything possible to help get Rory outside even when he was attached to equipment, and many of them became our friends."

After Rory's discharge from KCH, he spent some time at Cincinnati Children's Hospital for neurological rehabilitation. Now that he's back home with his dog Blue, a former therapy dog, Rory continues work with physical and occupational therapists to regain his strength and abilities. Because of some residual muscle weakness, he continues to eat through a gastronomy tube and has some lingering palsy in his face muscles. Although he's thriving, going back home was something Betsey and Tyler worried about.

"I was hesitant to leave the hospital," said Betsey. "After living in the hospital for so long, I was nervous that if we left, he wouldn't get better at home."

Shenoi had the opposite viewpoint.

"His parents are phenomenal," said Shenoi. "I felt really good when Rory went home and confident in their abilities. I knew he was going to get better because of the support he has."

"The McCamish family is wonderful," said Krishna. "Dealing with the illness with Rory was very difficult but they were fantastic partners to work with in the care of their child. I am thrilled Rory has come through this disease and is on the road to recovery."

When the McCamishes find themselves in the neighborhood of KCH, they make it a point to stop by the PICU to visit the people they have to come to see as family.

"So many of them pour their hearts into their patients," said Betsey, as she and Tyler prepare to celebrate a big milestone – Rory's first birthday on Sept. 10. "They deserve to see the outcome and what their handwork produces for a family."