LEXINGTON, Ky. (June 12, 2017) – When Sarah Lister spent more than four long months as an inpatient in the University of Kentucky Markey Cancer Center Blood & Marrow Transplant Unit, it was the creative endeavors Markey offered that kept her upbeat and motivated. From music therapy to yoga to narrative medicine, she participated in everything that came her way.

“All the integrative therapies they offer here are definitely worth taking up,” said Lister, who was diagnosed with acute myeloid leukemia in early January 2016. “I was up for all of it.”

Last Friday, Lister came back to Markey -- this time as a grateful survivor -- to enjoy the artistic endeavors of others with a whole new perspective through the cancer center's annual Expressions of Courage Celebration.

Expressions of Courage is an art exhibit showcasing original, artistic expressions connected in some way to an experience with a cancer diagnosis, or crafted by or in memory of a Markey patient whose battle has ended. Survivors and their loved ones are invited to participate in the yearly event, which is held every June in honor of National Cancer Survivorship Month.

This year’s event featured visual arts, musical performances, literary readings and more from more than 50 participants, and a record crowd of more than 375 attendees. After welcoming remarks from UK Markey Cancer Center Director Dr. Mark Evers, the celebration kicked off with a musical storytelling performance from cancer survivor and singer/songwriter Charlie Lustman, who travels the country to share stories of his battle with osteosarcoma.

“I’m here because I was left on this planet longer to do this, which is sing songs about surviving cancer at cancer centers all over America and the world,” Lustman said. “To cut the edge off the fear and the unknown for people touched by this who don’t understand it, and to bring it to them with songs, because music helps with the healing.”

Lister sat right in the front row for the performances, applauding and cheering on everyone who approached the microphone.

“This is a day I never knew existed, because I didn’t have to before,” she said. “But I’m so grateful that it does and that I get to be a part of it. And you bet I’m going to cheer for everyone. It takes guts to do this!”

Though Lister didn’t submit a piece for the event this year, she says she has plans to do a literary reading from her narrative medicine journal at next year’s celebration. Her journal entailed personal anecdotes from her time as an inpatient at Markey, including the sometimes-rough process of undergoing a bone marrow transplant.

As she sat in the Markey courtyard, surrounded by friends, food, music, and sunshine, Lister said the patients in isolation in Markey’s third floor BMT inpatient unit were never far from her mind.

“I kept looking up at the third floor as I listened to people singing and being joyous and celebrating,” Lister said. “I want those people to be sitting in these chairs next year… This whole day, it’s just a miracle to be here.” 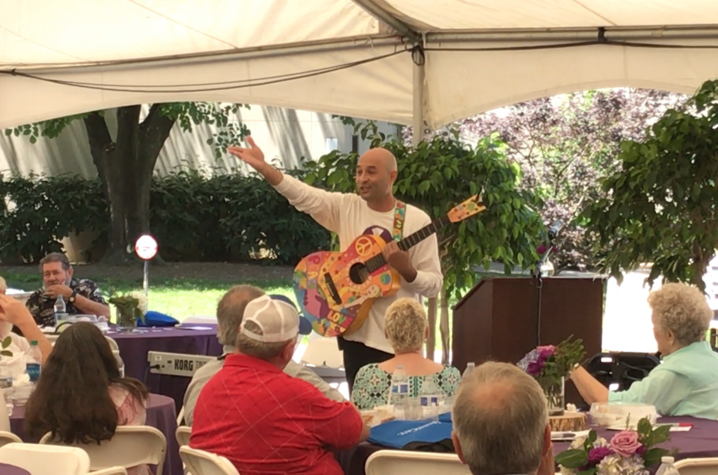