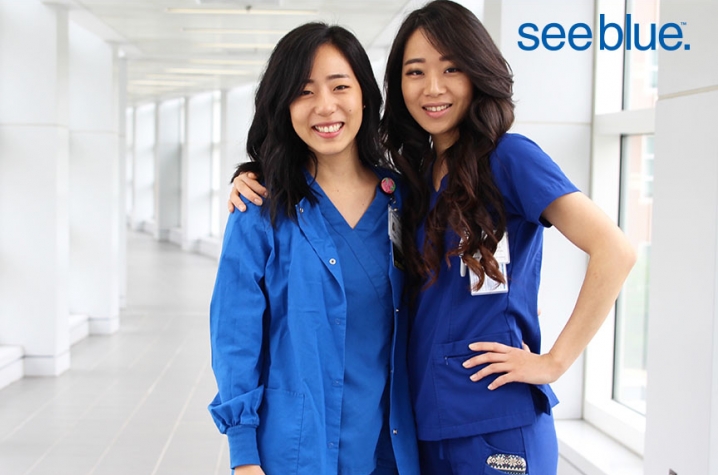 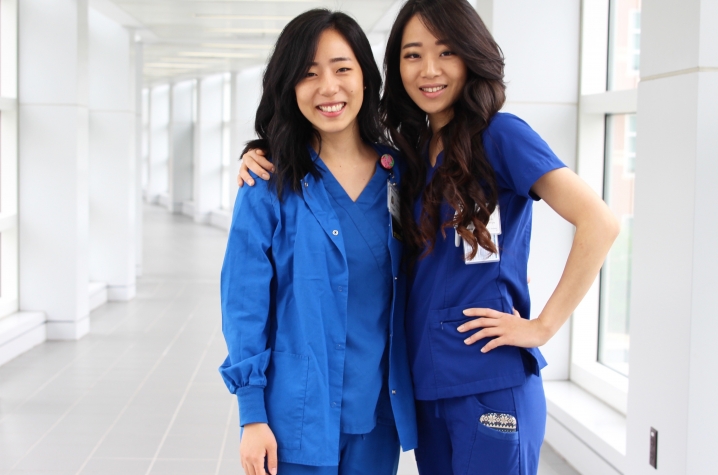 LEXINGTON, Ky. (June 10, 2016) — Joanna and Mary Cho have more in common than just their parents — they’ve taken the nursing profession by storm, with one sister a December 2015 graduate of the UK College of Nursing and the other expected to enter the profession in December 2016.

“She’s my partner in the crime,” Mary Cho, the older of the two by one year, said. Mary now works as a nurse in pulmonary care at the UK Chandler Hospital.

The pair came to the United States from South Korea in 2005 at ages 14 and 15. At a young age, they moved to Kentucky from Michigan so their father could attend Asbury Seminary and pursue his career as a pastor.

Mary’s interest in nursing peaked after their father had unforeseen symptoms of appendicitis, an unusual occurrence in an otherwise healthy family. The last time the girls had been to a hospital was when their younger brother, 16, was born.

“I thought, ‘I have to do something!’ This might happen again to someone in my family,” Mary said.

As for Joanna, nursing was not a likely profession until Mary chose it. That — in combination with her father’s illness and her volunteer work at the Thomson-Hood Veteran’s Center in Wilmore — led her to the UK College of Nursing only two semesters behind Mary.

“During my time here and from my past experiences I’ve learned that nursing is not just about physical health, but more about therapeutic, holistic care,” Joanna said.

The sisters have grounded each other through a mutual understanding of what it takes to be a nurse — from working long hours, to caring physically and emotionally for patients, to continually learning new methods — they’re on the journey together. Joanna has always appreciated Mary’s leadership.

“As the younger sister, I’d say I’m the one who’s benefiting more. (Mary) has helped me study, she’s cooked me dinner and even done my laundry when she knew I was struggling. She just always knew what I was going through and that was comforting.”

“I think it makes such a difference when someone’s following behind you,” Mary said. “I couldn’t fail in nursing because I knew I had Joanna right there. I had to leave a good image for her. She was always my motivation.”

Upon graduation, Joanna hopes to work at the bedside in either cardiovascular or trauma nursing before potentially returning to school to earn her Doctor of Nursing Practice (DNP). For now, the sisters continue to stand beside each other in a clinical setting and at home, but most of all, they’re always thinking about their patients.

“I’m excited to learn more about this field,” Mary said. “As a nurse, you might not change the world, but you might change a patient’s perspective of the world.”