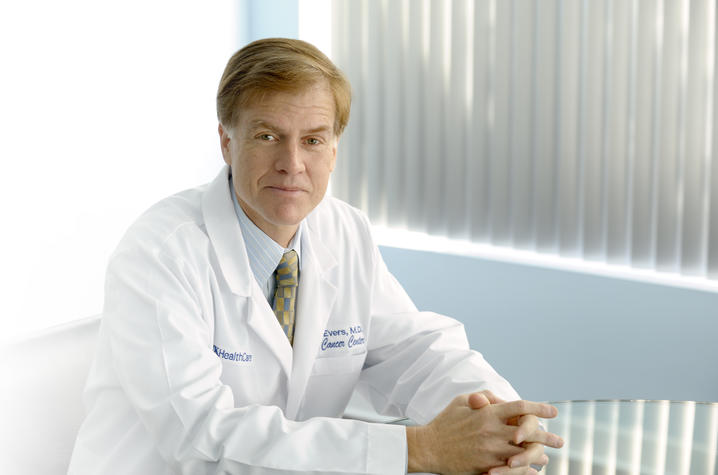 Dr. Mark Evers, director of the UK Markey Cancer Center, was just elected into the National Academy of Medicine, one of the highest honors in the fields of health and medicine.

LEXINGTON, Ky. (Oct. 19, 2020) – Dr. B. Mark Evers, professor of surgery in the University of Kentucky College of Medicine and director of the UK Markey Cancer Center, has been elected to the National Academy of Medicine.

Election to the Academy is considered one of the highest honors in the fields of health and medicine and recognizes individuals who have demonstrated outstanding professional achievement and commitment to service. New members are elected by current members through a process that recognizes individuals who have made major contributions to the advancement of the medical sciences, health care, and public health. A diversity of talent among NAM’s membership is assured by its Articles of Organization, which stipulate that at least one-quarter of the membership is selected from fields outside the health professions — for example, from such fields as law, engineering, social sciences, and the humanities.

Evers is one of 100 new U.S. and international members elected by their peers. According to the Academy, Evers was elected for his expertise on intestinal hormones and hormonal arcades in oncogenesis. His seminal insights defined the role of gut hormones on normal physiology and metabolism, pioneering innovative understanding of neuroendocrine cell biology and the role of neurohormonal pathways in the development and progression of neuroendocrine tumors.

“This distinguished and diverse class of new members is a truly exceptional group of scholars and leaders whose expertise in science, medicine, health, and policy will be integral to helping the NAM address today’s most pressing health challenges and inform the future of health and health care for the benefit of everyone around the globe,” said National Academy of Medicine President Victor J. Dzau. “It is my privilege to welcome these esteemed individuals to the National Academy of Medicine.”

Coming to serve as director of the UK Markey Cancer Center in 2009, Evers took on a significant challenge in leading efforts to address Kentucky’s high cancer rates and the associated health disparities that contribute to them. Under his leadership, the UK Markey Cancer Center has grown to become a nationally ranked cancer center that treats patients from all over the world.

“Dr. Evers is an accomplished physician-scientist and has been a tremendous asset to the University of Kentucky during his time here,” said University of Kentucky President Eli Capilouto. “As the director of UK’s Markey Cancer Center, he has been the driving force behind its many accomplishments in the past decade, including earning a National Cancer Institute designation and becoming a top 50 cancer center in the U.S. for the past four years. His work, whether behind the bench, in the operating room, or leading Markey’s team of faculty and staff, is unparalleled. This recognition is richly deserved.”

As a scientist, Evers has been a transformative leader and an internationally renowned expert in the neurohormonal arcade that leads to oncogenesis of neuroendocrine tumors. He is a leading authority on gastrointestinal hormones (e.g., neurotensin) and their role in cancer development as well as in metabolic syndromes. Studies from his laboratory over the years highlight discovery of the roles of neurohormonal pathways in tumor development, treatment and progression, signaling mechanisms leading to intestinal differentiation, and the role of intestinal hormones in obesity and comorbid conditions. He has produced more than 330 peer-reviewed publications and been continuously funded by the National Institutes of Health for the past 28 years, establishing him as one of the highest NIH-funded surgical scientists in America.

“This is a huge honor, and I am truly humbled to be considered among this elite group of health and medicine professionals,” Evers said. “Throughout my career, I’ve been fortunate to work alongside exceptional colleagues and collaborators, including many talented and dedicated investigators in my laboratory. Without them, this would not have been possible.”