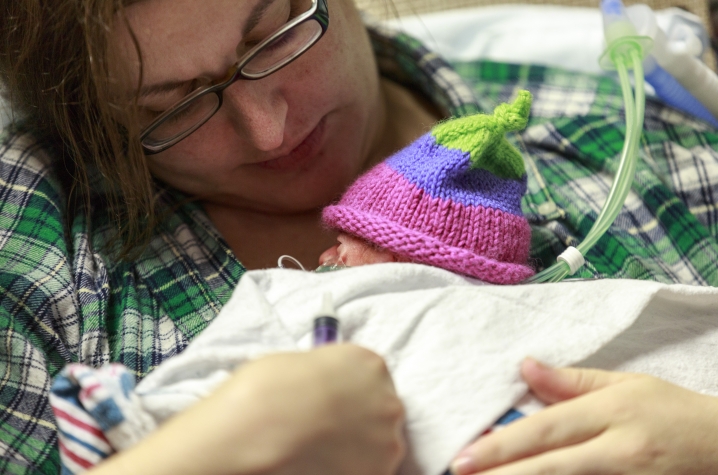 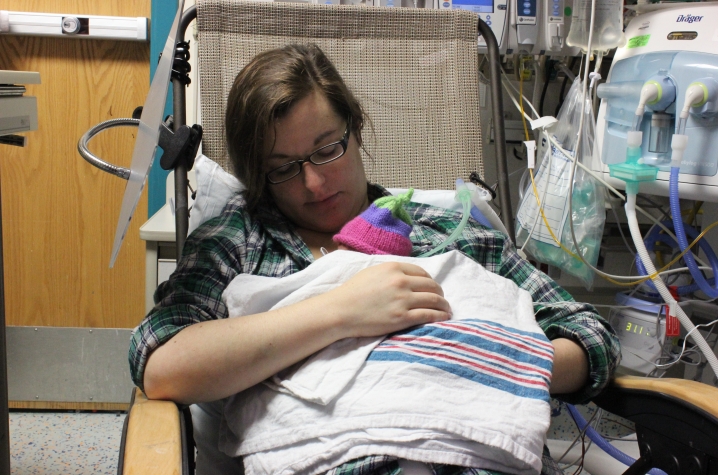 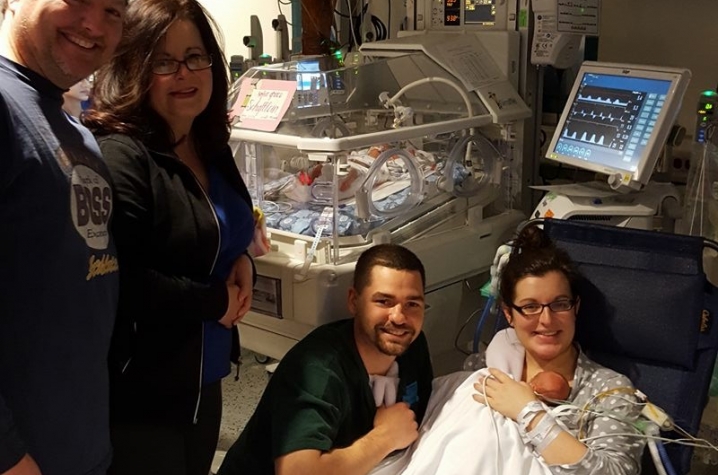 LEXINGTON, Ky. (Nov. 17, 2016) — The smallest of the quintuplets, Sadie defied her size with her energy, churning her legs inside and out of the womb. Her sister Scarlett, on the other hand, established herself as the calm and docile member of the bunch. And family members have already pinned Lucas, the sole boy in the group, as the sweetheart — perhaps a future golfer, his dad speculated.

“They have the same personalities as they did in my belly,” mom Katie Schaftlein said while getting situated for Kangaroo Care bonding with baby Sadie.

Surrounded by her 6-day-old babies in the Kentucky Children’s Hospital Neonatal Intensive Care Unit (NICU), Katie Schaftlein beheld a lifelong dream fulfilled overnight. She always wanted five children, although her husband Lucas thought they might end up with three or four. Katie’s five arrived as a 26th birthday present. She delivered five early but healthy babies — Sadie, Sofia, Scarlett, Savannah and Lucas — at the UK HealthCare Birthing Center before the stroke of midnight on Friday, Nov. 11.

The Lexington couple and University of Kentucky graduates found out early in Katie’s pregnancy that five babies were on the way. They consulted with high-risk obstetrics specialists at UK HealthCare and neonatologists at Kentucky Children’s Hospital in preparation for delivery, with the goal of sustaining the pregnancy through 28-weeks gestation. An interdisciplinary team of doctors, nurses, and therapists from UK Women’s Health, Obstetrics and Gynecology and Kentucky Children’s Hospital coordinated a integrative care plan for the Schaflein quintuplets, whose expected early arrival would require specialty care in the region’s only Level IV Neonatal Intensive Care Unit. Quintuplets are extremely rare, with the Centers for Disease Control reporting 47 national cases of quintuplets or higher order multiple births in 2014.

On a Friday morning in September, Lucas boarded a flight for a business trip to Japan. As soon as he landed on the other side of the world, he learned Katie, who was 22 weeks pregnant at the time, was admitted to the hospital while he was in flight. He booked a flight back to the U.S. as soon as possible, flying home a couple days later.

“I left her that day and kissed her goodbye, and three four hours later she was in the hospital,” Lucas said.

Katie remained in the hospital on bed rest for two months before delivering the babies at 29 weeks and five days gestation. Teams of nurses were assigned to each of the five babies upon arrival and the medical teams made special accommodations to ensure three additional neonatologists were on-call at all times and five NICU beds were reserved for the Schaftlein quintuplets. Neonatologists met with the family during inpatient treatment to assess infant development and prognosticate the status of each baby upon arrival. Katie’s ultrasound a day prior to delivery provided the comprehensive medical team with current information on the development status of each baby.

When Sadie’s water broke at 7:30 p.m. on Nov. 11, Dr. Wendy Hansen’s obstetrics team alerted KCH neonatologists to prepare to receive the babies and took Katie into surgery for an emergency caesarian section. The operation started at 11:30 p.m., but all the babies were delivered the final baby in time to share a birthday with their mother.

Hansen, who delivered five babies within four minutes, presented each baby to Lucas and Katie before sending the infants to the NICU for precautionary care and respiratory support. Hansen delivered the last baby at 11:56 p.m., a declaration that sent a cheer through the halls of the UK Birthing Center.

“We were worried because we didn’t want them to have two different birthdays,” Katie said. “Everyone cheered, and at that point I was like, ‘Okay, they are out.’”

Dr. Peter Giannone, the chief of the Department of Neonatology at KCH, credits the dedication of the Schaftlein family, as well as collaborative efforts and streamlined communication among obstetricians, nurses, neonatologists and therapists, for a positive outcome for the quintuplets. The two departments recently formed the Obstetrics, Maternal-Fetal-Medicine, Neonatology, and Infant (OMNI) follow-up care service line, eliminating communication and collaboration barriers common in academic medical systems by coordinating cross-disciplinary efforts and uniting medical teams to enhance family-centered care.

“My biggest memory is the teamwork that everyone showed to pull this off so seamlessly,” Giannone said.

The Schaftlein quintuplets will remain in the hospital for several weeks before they are ready to go home. In the meantime, UK neonatologists will monitor the respiratory strength and development of the babies. Lucas and Katie Schaftlein, as well as family members in Louisville and Lexington, are visiting and bonding with the babies in the NICU. The couple is grateful for the support, dedication and poise of members of their integrative medical team. Katie was put at ease by the calm demonstrated by Hansen as her water broke and delivery was imminent. Several nurses who assisted the family throughout Katie’s hospitalization were present at the delivery to “catch” (or retrieve) each baby to the NICU.

“It came full circle. Everyone who helped in the beginning was there for the delivery,” Katie said.

Grateful for the outpour of support from the community, Katie and Lucas Schaftlein encourage those wishing to contribute to the family to instead donate to the Ronald McDonald House at rmhclexington.com or Lifehouse Maternity Home at www.lifehouselouisville.org.

A live stream of the press conference will be aired at 2 p.m. at https://youtu.be/c_2-ZYtlBJY.