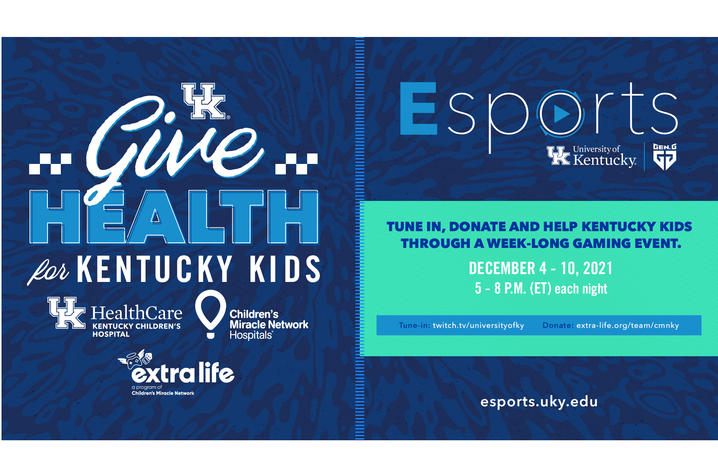 LEXINGTON, Ky. (Nov. 30, 2021) — Gen.G and the University of Kentucky announced today the two will continue their ongoing partnership by joining forces for the second annual "Give Health for Kentucky Kids'' fundraiser in December supporting Kentucky Children’s Hospital. All proceeds of this event go directly to Extra Life for the Kentucky Children’s Hospital — a program through Children’s Miracle Network that unites gamers from across the globe to raise money for children’s hospitals. Streamers local to Kentucky, including ThatNerdChris, and others from the Gen.G stream team will participate in charity streams across one week.

The seven day streamathon kicks off on Dec. 4, 2021 with content from 5 to 7 p.m. ET at www.twitch.tv/universityofky. Viewers can donate to the campaign at www.extra-life.org/team/cmnky. Gen.G will also be matching up to $5,000 in donations for the duration of the streamathon.

This year’s fundraiser is the second time Gen.G and UK will partner on “Give Health for Kentucky Kids” with last year’s efforts raising over $20,000. UK and Gen.G have held pre-fundraising initiatives, including a single-day fundraiser which raised $4,327, as well as collections from October’s Before The Madness which raised $400. In partnership with the UK, the Gen.G Foundation awarded one student with a $10,000 scholarship for the 2021-22 academic year.

“We’re grateful to Gen.G for their generosity and continued support,” said Scottie B. Day, M.D., physician-in-chief at Kentucky Children’s Hospital. “It’s a unique partnership that not only raises funds for our hospital, but they find ways to create fun experiences for our patients.”

As shared by one of our parents, “The value of gaming has been therapeutic in helping our son adjust to life without his sibling. At the hospital, ‘gaming’ allowed a distraction from the heavy reality of what was going on around. Children should be allowed distractions that help to process the serious situations they are dealing with. Gaming has helped my son cope with loss and process grief in an appropriate way, and at an appropriate pace for his age.”

Established in 2017, Gen.G is the leading esports organization connecting the United States and Asia. Ranked No. 6 in the inaugural Forbes list of the “World's Most Valuable Esports Companies,” Gen.G is the only major organization that owns and operates top teams in the world's leading esports markets —China, South Korea and the United States. Its unique portfolio of teams, winners of seven global championships to date, includes the Seoul Dynasty franchise of the Overwatch League; 2014 and 2017 League of Legends world champion team in South Korea; the world's top all-female Fortnite team, based in Los Angeles; and the NBA 2K League's historic expansion franchise in Shanghai.

Kentucky Children's Hospital, part of UK HealthCare, is committed to providing the best care possible for children and their families. With the region's only Level I pediatric trauma center and Level IV neonatal intensive care unit, more than 30 advanced subspecialty programs such as pediatric oncology and pediatric surgery and nationally ranked by U.S. News and World Report in both pediatric heart care and orthopedics, KCH is equipped to provide the highest level of care to young patients, close to home.