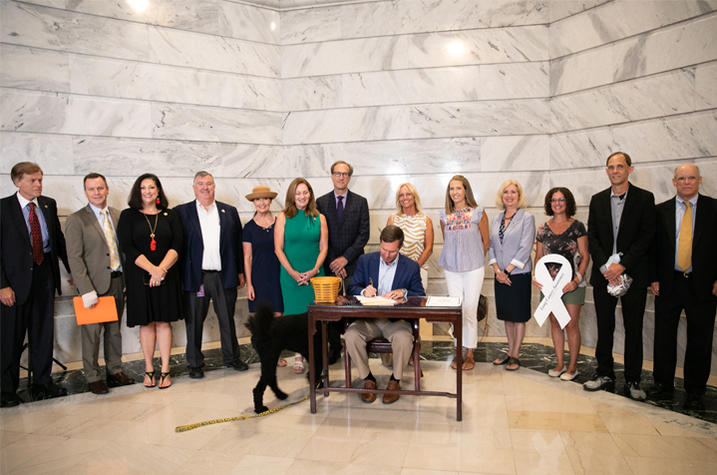 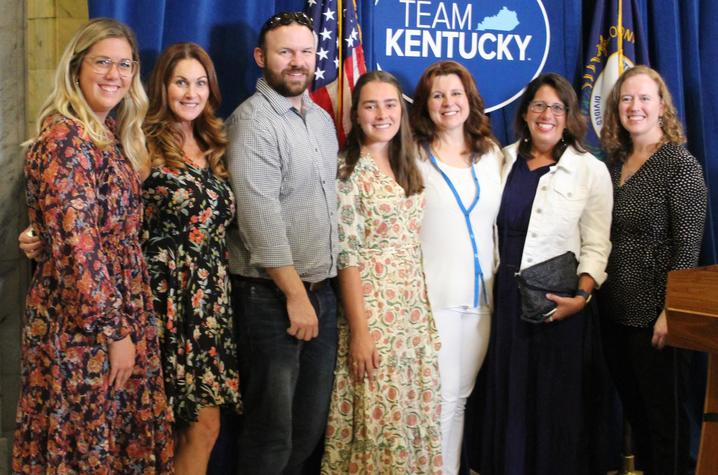 LEXINGTON, Ky. (July 22, 2022) — Kentucky has the highest incidence of lung cancer diagnosis and mortality in the U.S. A new statewide lung cancer screening program will help to reverse this statistic and save thousands of lives through early detection.

The bill, sponsored by Rep. Kim Moser, also creates a lung cancer screening fund and a Lung Cancer Screening Advisory Committee that will provide oversight of the program.

The Kentucky Cancer Consortium (KCC) Lung Cancer Network — with over 100 organizations — and the Kentucky LEADS (Lung Cancer Education Awareness Detection Survivorship) Collaborative, both housed at University of Kentucky Markey Cancer Center, were created soon after lung cancer screening guidelines were first approved in 2013 to galvanize statewide partnerships around the common goal of making Kentucky a leader in lung cancer screening. Kentucky has experienced early success in lung cancer screening, thanks to these efforts to convene many partners to work together and leverage the power of collaboration — including universities, cancer advocacy organizations, public health agencies, health care systems and other organizations throughout the state.

The excitement about this momentum and ongoing discussions in the KCC Lung Cancer Network helped to fuel the inspiration for this new program. The program was also inspired by the Kentucky Colon Cancer Screening Program established in 2008, which, together with collaborative efforts such as the KCC and the Kentucky Cancer Program (KCP), has helped to move the state’s colon cancer rates from 49th in the nation to 22nd.

“Kentucky is home to some of the worst cancer rates in the country, and lung cancer is at the top of that list. But because of our collaborative work with many organizations and individuals in early detection in lung cancer, we are seeing decreases in late-stage lung cancer that we have not seen before,” said Timothy Mullett, M.D., a professor of cardiothoracic surgery, the medical director of the UK Markey Cancer Center Affiliate and Research Networks, and co-principal investigator of the Kentucky LEADS Collaborative. “HB-219 will continue to help reduce the impact of this disease in the Commonwealth by increasing access to the lifesaving procedure for thousands of uninsured and underinsured Kentuckians.”

When HB-219 was proposed in January, the UK Markey Cancer Center was asked to provide comments on the bill, which was originally focused solely on covering screening for uninsured and underinsured individuals. Based on analysis of data from the 2021 Kentucky Cancer Needs Assessment, leadership from Markey’s CIO and the Kentucky LEADS Collaborative provided written comments, explaining that an exclusive focus on direct services to the uninsured and underinsured would only benefit a small number of Kentuckians because less than 6% of Kentuckians have no insurance. Through conversations with leaders from the Kentucky LEADS Collaborative and KCC Lung Cancer Network, the team recommended that the bill instead charge the program’s Advisory Committee with shaping the scope of the program based on current data, guidelines and best practices, with the goal of improving access to high-quality screening.

The bill sponsors adopted Markey’s recommendations, and the bill passed with an initial appropriation of $500,000. The KCC the KCP at UK, and the Kentucky Cancer Registry based at UK Markey Cancer Center were among the organizations named in the bill to be required members of the program’s advisory committee.

Although Kentucky ranks second highest in the nation in lung cancer screening, still only about one in five eligible Kentuckians are currently screened for lung cancer.