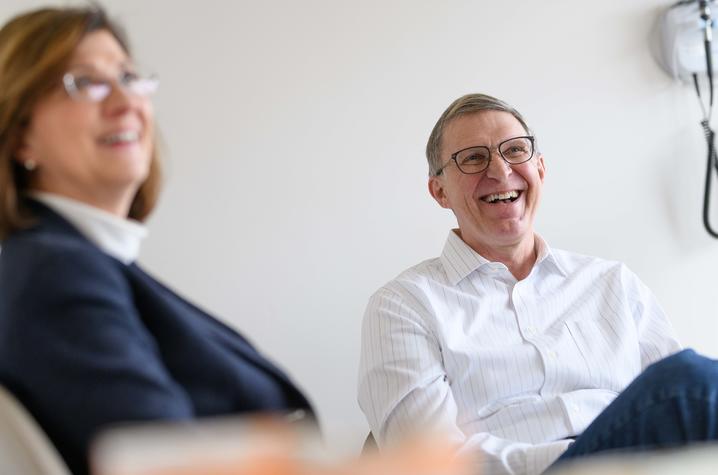 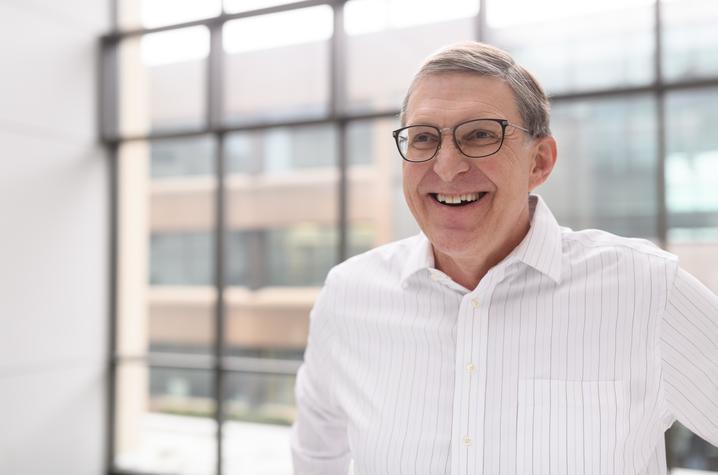 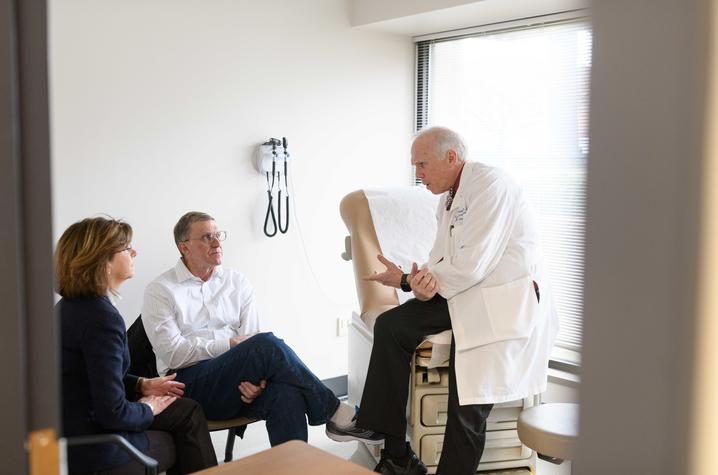 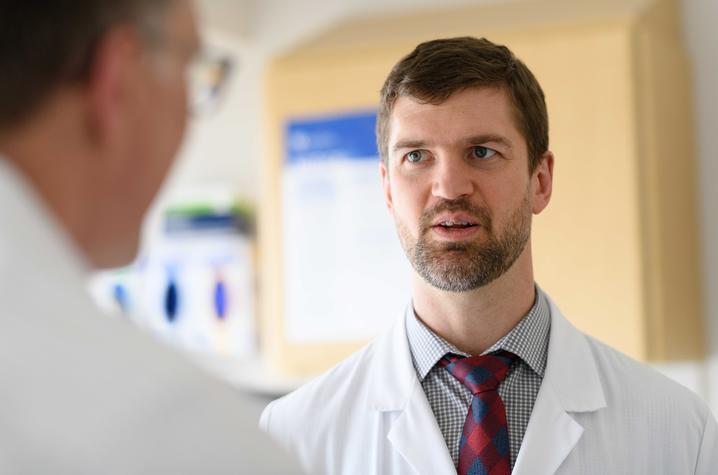 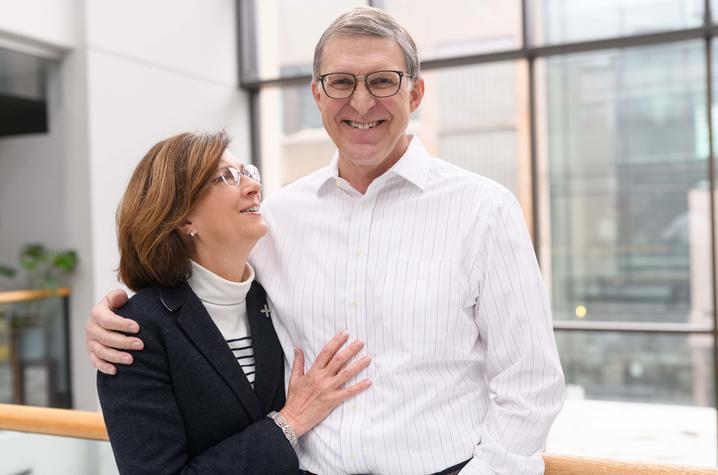 LEXINGTON, Ky. (March 2, 2020) – When Paul Roscoe went to his primary care physician for a checkup in summer 2016, he was in rough shape: the 6’2” former football player and fitness enthusiast had lost an alarming amount of weight without trying – 40 pounds – in just a few short months.

The culprit? Stage IV pancreatic neuroendocrine tumors, which had spread to his liver and other surrounding organs. The tumors were wreaking havoc on his hormones and subsequently, his gastrointestinal tract. After receiving this diagnosis from a local gastroenterologist, Roscoe was determined to educate himself on this disease that he’d never heard of.

“I just dove into my research, and starting looking up information on neuroendocrine cancers,” he said. “I mean, I couldn’t even spell it.”

A chemist for more than 40 years, Roscoe’s career had taken him all over the world: Australia, Singapore, Thailand, various parts of Europe and more. He and his wife, Windy, had moved for work seven times after getting married, living in cities across the south and Midwest before settling in Lexington – already home to their two sons and grandchildren – in 2015.

Their last move turned out to be serendipitous – through his research, Roscoe learned that a nationally-renowned doctor who specialized in these rare cancers was just down the street: University of Kentucky Markey Cancer Center medical oncologist Dr. Lowell Anthony. In August 2016, he walked into his first appointment at Markey to consult with Anthony.

“I wasn’t in very good shape when I walked in to see him,” Roscoe said.

“He was pretty skeletal,” Anthony said. “Our first priority was lowering the hormone levels that his tumor was secreting, which would reduce his gastrointestinal symptoms.”

Not all neuroendocrine tumors can be treated the same way – different hormones, which cause different problems and side effects, can be sent into overdrive depending on the type of tumor involved. Roscoe’s diagnosis of pancreatic neuroendocrine cancer puts him in some famous company – it’s the same disease that took the lives of both Steve Jobs and Aretha Franklin. Luckily for Roscoe, his tumors had developed in the “tail” of the pancreas, which meant the disease was more surgically accessible than tumors that develop in the pancreas head.

After Roscoe’s first round of chemotherapy, Anthony performed multiple tests until he could narrow Roscoe’s diagnosis further: a malignant VIPoma, a type of pancreatic neuroendocrine tumor that forms from the cells that produce vasoactive intestinal peptides (VIP). This specific cancer occurs in just one of every 10 million people.

“We sometimes call this disease ‘pancreatic cholera,’” Anthony said. “These patients come in and they’re malnourished and dehydrated with a severe electrolyte imbalance.”

Rather than going after the primary pancreatic tumor, Anthony tried a different approach: tackling the liver tumor first. He switched Roscoe over to different chemotherapies: octreotide to block the effects of the overproduction of VIP, and a combination of capecitabine and temozolomide (known as CAPTEM) to help treat metastasis of the disease.

The chemo helped – after over a year on the drugs, a PET scan showed improvement, but Roscoe was experiencing extreme fatigue and was taken off the CAPTEM. During the next year, he underwent two liver embolizations, a procedure that blocks blood flow to the liver tumors and helps kill cancer cells. This piece of his treatment was key, says Anthony.

“There was just so much liver involved,” Anthony said. “Most of his liver had been replaced by tumor – around three-fourths of it was taken over. We needed to reduce that mass so he could have surgery.”

The liver embolizations were rough on Roscoe – he experienced a lot of pain, and was readmitted to the hospital twice. But the treatment was effective, and in April 2019, he was finally able to undergo surgery. Markey surgical oncologist Dr. Michael Cavnar biopsied Roscoe’s liver and removed the tail of his pancreas – resecting all the primary tumor – and also removed his gallbladder, appendix, spleen and 16 lymph nodes.

“It’s like being the closing pitcher in a baseball game,” Cavnar said. “Dr. Anthony got him into a great position for me to go in and get Mr. Roscoe’s primary tumor out.”

He spent four days recovering in Markey’s inpatient unit on the 11th floor of UK Chandler Hospital Pavilion A. After going home, he took just one day off and then decided to go back to work. Three months later, he sought clearance from his doctors so he could return to his workout of choice: swimming.

“I exercise a lot,” Roscoe said. “I think staying in shape plus the wonderful support of my wife, family, friends, employer and church [Christ Church Cathedral] was what helped get me out of the hospital quickly. So I walked for about three months after, and then they let me get back in the pool.”

His health was looking up – and then, Roscoe faced an unrelated setback after tripping and falling while staying in an Airbnb late last year. A series of seizures brought him to UK HealthCare’s Emergency Department, where he was diagnosed with a subdural hematoma, a type of bleeding in the brain. Later that evening, UK neurosurgeon Dr. Justin Fraser performed a burr hole surgery, a procedure where tiny holes are drilled into the skull to relieve the pressure on the brain.

While he’s been recovering from his brain surgery, Roscoe is also continuing to battle his cancer. With the pancreatic tumor gone, their focus is back to the remaining disease in the liver. Roscoe’s tumors have unfortunately continued to progress, so the next step of his treatment will involve a drug relatively new to the market: peptide receptor radionuclide therapy (PRRT), known by its brand name Lutathera.

Lutathera is a treatment specifically for neuroendocrine tumors occurring in the pancreas or gastrointestinal tract. It’s given to patients like Roscoe, who continue to experience tumor growth after receiving multiple other therapies.

This radioactive drug binds to a part of a cell called a somatostatin receptor, which may be present on certain tumors. After binding to the receptor, the drug enters the cell allowing radiation to cause damage to the tumor cells. In other words, the “hot” radioactive drug is encased in a “cold” drug, which allows it to move throughout the bloodstream safely. Once it reaches the tumors, the cold drug wears off, allowing the radiation to kill the cancer.

Though it wasn’t approved by the Food and Drug Administration until 2017, Anthony has been involved in research on the drug for more than two decades. Markey was the first medical center in Kentucky to offer the drug, and so far Anthony has treated approximately 70 patients.

“With the Lutathera, we’re anticipating more improvement in his symptoms,” Anthony said. “It will hopefully reduce the amount of disease he has and help control his gastrointestinal issues and give him more energy. We’re really wanting to help him get back to swimming and other physical exercise.”

Roscoe has been dealing with his disease for nearly four years, and he’ll continue to fight it for the rest of his life. Because of the extent of liver metastasis, a complete cure is not an option. The goal is to keep him as healthy and active as possible so he can have the best quality of life.

“After all I’ve been through with this the last four years, I’m just grateful to be here,” Roscoe said. “I mean, you chalk up another year, and you say, ‘Here we are, year number four.’”

“Paul has faced every emotion a cancer patient has had to face,” Anthony said. “And considering the extent of his metastasis and how sick he was when he arrived at Markey, it’s a miracle he’s here.”

Cavnar agrees. “He’s a great patient,” he said. “He has an extremely optimistic attitude and is amazingly resilient even in the face of setbacks.”

And while Roscoe says he could have gone anywhere in the country for treatment – thanks to the medical insurance provided by SABIC, the petrochemical manufacturing company he works for – he felt that Markey was the right choice for him.

“We’ve moved seven times, and I got to thinking, ‘I’m just so happy with the care I’ve had at Markey,’” he said. “So I just told my company, ‘No thanks.’ I just put everything I had in Dr. Anthony’s hands and let him work his magic.”