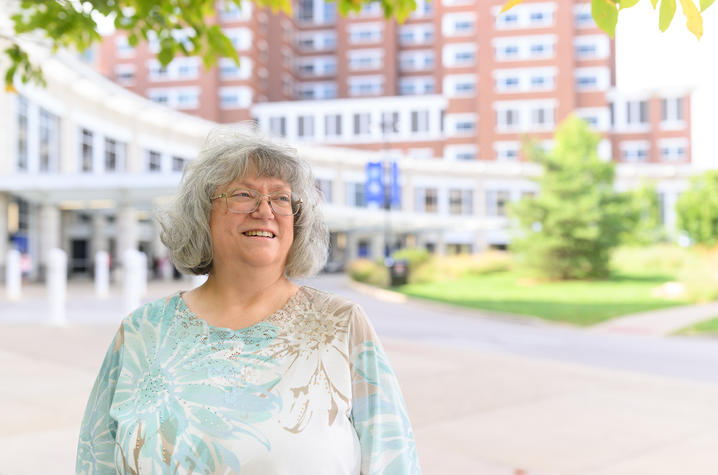 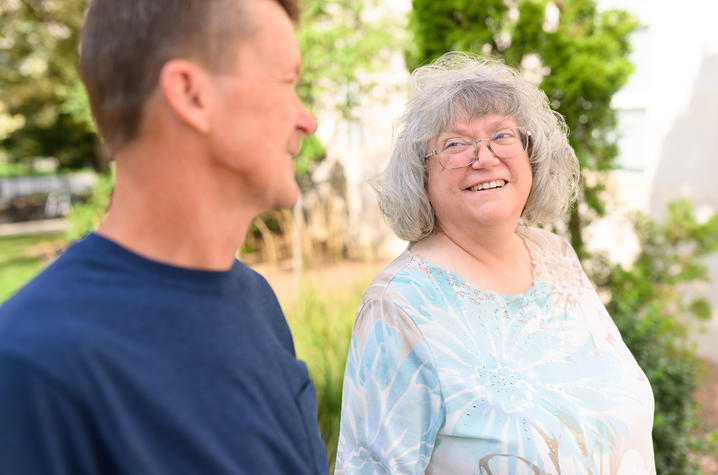 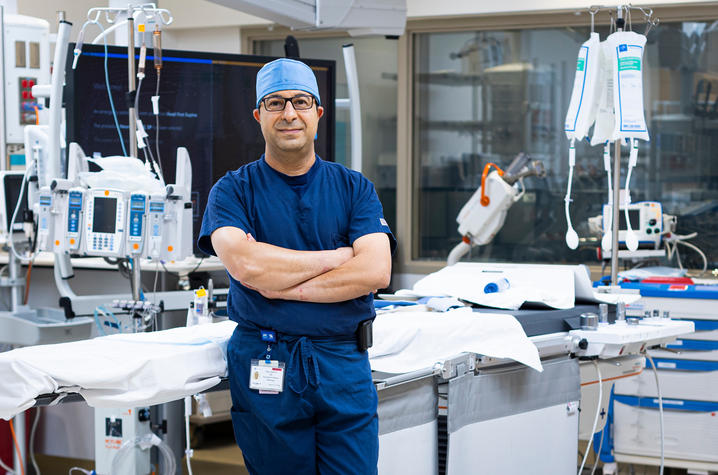 LEXINGTON, Ky. (Sept. 21, 2022) — Next year, Robin Bullock will be celebrating 25 years of marriage with her husband, Roger. The milestone anniversary is a significant occasion in anyone’s life, but for Bullock, it means just a bit more. Not too long ago, the 57-year-old Somerset resident didn’t think she’d be here to celebrate it.

In 2016, Bullock was experiencing abdominal pain and went to the doctor expecting something was wrong with her gallbladder. Instead, she was diagnosed with a rare form of cancer: a neuroendocrine tumor in her intestines had metastasized to her liver.

Her local doctor referred her to the University of Kentucky Markey Cancer Center, where she met with medical oncologist Lowell Anthony, M.D., who specializes in treating neuroendocrine cancers.

“That’s when I found out how bad it really was. It was stage 4,” Bullock said. “I saw the scan of my liver and it was completely covered in tumors. It looked like it was shot up with a shotgun.”

The cancer in Bullock’s liver was so advanced, surgery to remove the tumors was no longer a treatment option. The way things were going, she was only expected to survive a couple more years.

“Mrs. Bullock’s liver was in bad shape — about 75% of the liver was covered in tumors,” said Anthony. “At this stage, many patients cannot be operated on because it can cause more harm to them. In her case, it would’ve caused liver failure.”

But while some treatments were ruled out, there were still other options.

“I appreciated that while Dr. Anthony was honest with the bad news, he was still optimistic,” Bullock said. “He told me there were other medications and treatments available that could help prolong my life. I remember him saying, ‘Our job is to keep you going as long as we can.’”

For Bullock, the course of treatment included a targeted cancer drug called everolimus and bland embolization, a specialized interventional radiology (IR) procedure that cuts off the blood supply to tumors in the liver.

Bullock had a total of four embolizations performed by UK HealthCare interventional radiologist Gaby Gabriel, M.D.; the right and left lobes of her liver in 2017, and again in 2018.

Interventional radiologists like Gabriel use medical imaging to guide needles and catheters through a patient’s body to diagnose and treat many different conditions. Minimally invasive IR procedures like embolization and ablation are often used in the treatment of cancer.

As a member of the UK Markey Cancer Center’s multidisciplinary neuroendocrine cancer team, Gabriel was a part of Bullock’s care team from the very beginning of her cancer journey.

“As an interventional radiologist, I collaborate with Markey oncologists in the care of cancer patients from the beginning of their journey with a biopsy that leads to diagnosis — to different types of treatments using all the advanced image-guided therapies we have here at UK HealthCare,” said Gabriel.

Gabriel says bland embolizations are an especially effective treatment for liver cancer because of the way blood is supplied to the liver.

When she started treatment, Bullock experienced debilitating symptoms including nausea, extreme fatigue and flushing of the skin. She had to give up her job as a cafeteria worker in the Somerset school system due to its physical nature and often hot conditions.

Then as treatments progressed, the side effects made her sick. Bullock says she found strength in her family.

“I thought, well you got to get it together because my husband and parents were having a hard time with my diagnosis,” Bullock said. “I wasn’t the only one going through this. They were, too. And I tried to be strong for them.”

While her liver tumors were inoperable, the primary tumor in Bullock's intestine was able to be removed once the liver cancer had stabilized. In 2019, six months after her last embolization procedure, Bullock had surgery to remove the tumor in her intestine.

And as time progressed, her symptoms started to disappear.

“I didn't think about having cancer,” Bullock said. “I had to put it to the back of my mind, and at times, I wouldn't feel like I had it. I just didn't really have much pain. And what pain I did have, I could tolerate.”

Bullock’s most recent scan in June 2022 showed no signs of cancer. Today, she is no longer taking any cancer medication.

“I still can’t believe it,” Bullock said. “Dr. Anthony, Dr. Gabriel and the whole care team at UK has been incredible the entire way through this journey. And did the embolizations help? Well, I think they helped a great lot because I never dreamed I would be here today.”

IR procedures are giving Markey cancer patients like Bullock hope, and more time. Having an interventional radiologist as part of the cancer care team has been key.

“Since Mrs. Bullock started treatment, Dr. Anthony and I have worked closely to determine the best course of care based on how her cancer was progressing, and that has been key to her treatment outcome,” said Gabriel.

“Mrs. Bullock owes her life to what Dr. Gabriel has done,” said Anthony. “It’s unusual to have a medical oncologist and interventional radiologist on staff work so closely together and understand the needs of their patient. And in the greater context of this neuroendocrine team, it is helping us achieve outcomes that never had been achieved before.”

The treatments have given Bullock more time, and she is enjoying every moment. She just returned from summer vacations in New York and the Carolinas and has been considering going back to work or volunteering. She says the power of positivity has given her the strength to move forward.

“When I first met Dr. Anthony, he told me to go on with my daily life, not to just sit down and give up,” Bullock said. “That mindset was just so important for me to keep going. Just never give up on hope.”