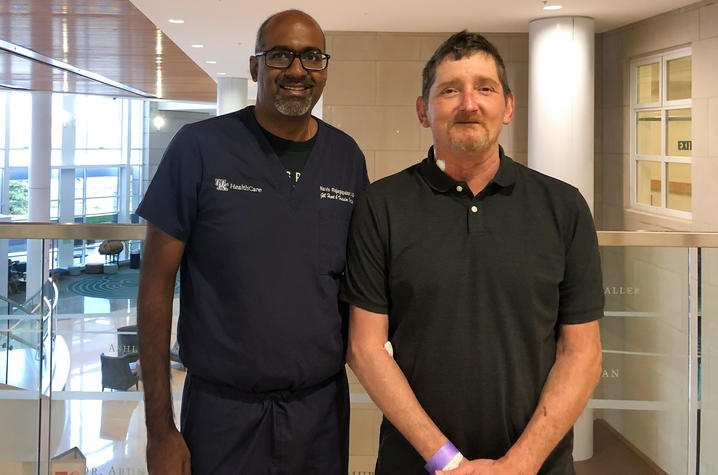 The 56-year-old was living in east Tennessee, working in hard rock mining and drilling. His work took him all over the country and beyond. He was active, walking five or six miles a day. In the fall of 2021, he started feeling unwell. His ankles were swollen, and his breath was short.

“Before, I could run around the block, then boom, my face and ankles started swelling, I had no energy,” Napier said. “I couldn’t move, couldn’t breathe. I thought, ‘This ain’t me.’”

Napier made an appointment with a cardiologist in Tennessee who diagnosed him with congestive heart failure. At this point, he was no longer able to work, so he moved to Harlan to be closer to his sister. He continued his care with cardiologist Georges Damaa, M.D., at Harlan Appalachian Regional Healthcare (ARH) Hospital.

“When I first met Tom Napier, he had already given up hope that he'd see his grandchildren grow up, or even enjoy the rest of his life,” said Damaa. “One day he told me: ‘I just couldn't bear the suffering anymore.’ I replied that an advanced treatment is available for his heart failure.”

“Dr. Rajagopalan is a good friend and colleague,” said Damaa. “He expedited an appointment for Tom. I knew he would be in good hands.”

Rajagopalan describes Napier’s case as a strange one. While he has a family history of coronary artery disease, left heart catheterization revealed he had no coronary blockages.

“In the end, we don’t really know what caused his heart failure,” Rajagopalan said. “We know COVID can cause heart inflammation, and that can happen with other viruses as well. It could be genetic, but he has no known family history.”

Napier’s illness was sudden, and his decline was quick. On March 9, 2022, he underwent a right heart catheterization, an invasive test that measures how well the heart is pumping.

“When I saw him in clinic, it was clear he wasn’t doing very well,” Rajagopalan said. “His heart was really struggling, and we needed him to get better as soon as possible.”

Napier was admitted to the hospital that day. Right away, Rajagopalan and his team began work on what was Napier’s last option — a heart transplant.

“I was scared, not knowing what was going on or being able to see the whole picture,” Napier said. “It was the first surgery I ever had.”

“One of the challenges with a patient like him is that we didn’t know him very long,” Rajagopalan said. “Some patients can get better with treatment, but we didn’t have time to wait. We couldn’t say, try this and come back in six months, because he may have been dead by then. He realized how sick he was, and he was going to do everything he could to get better. Dr. Damaa referred Mr. Napier to our program at precisely the right time before he got too sick for us to help him.”

On May 25, Napier underwent a lengthy surgery with transplant surgeon Rajasekhar S. R. Malyala, M.D., and got his new heart.

“It’s a weird feeling, knowing you got somebody else’s heart,” Napier said. “But it changed me. I was fading. I knew I was going to die.”

Six months later, Napier is feeling good. He cannot wait to go back up to the cardiac intensive care unit to visit with nurses, therapists and staff who cared for him.

“They probably won’t recognize me,” Napier said. “Like, who’s this guy walking in here, strutting?”

He is taking his recovery one day at a time, following his care team’s instructions to the letter. Because he was in good shape before his transplant, the physical rehabilitation was minimal. But he still has days where his energy is low and needs to take it easy.

“I’m bad because I’m trying to rush it,” he said. “I’m hard on myself because I want to get better. But it takes a while.”

Napier spends his days driving around with his girlfriend Patsy and their dog. They had been friends for years before drifting apart.

“We met up and started talking again,” said Patsy. “Life brought us back together.”

Tom does not know anything about his donor or their family, but he would be honored to speak with them if they chose to reach out. He has a few words for anyone who may be on the fence about signing up to be an organ donor.

“I would tell them to do it because it saves a life — it saved my life,” he said. “I would have been dead, no doubt about it.”

In Kentucky, more than 1,000 people are on the waitlist for an organ transplant.

To join the registry, visit http://registerme.org or sign up when you renew your driver’s license. The donor registry enables family members to know that you chose to save and enhance lives through donation. Kentucky’s “First Person Consent” laws mean that the wishes of an individual on the registry will be carried out as requested.