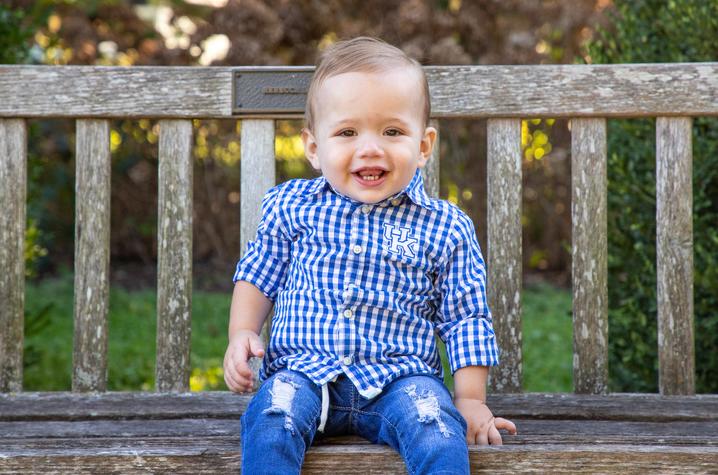 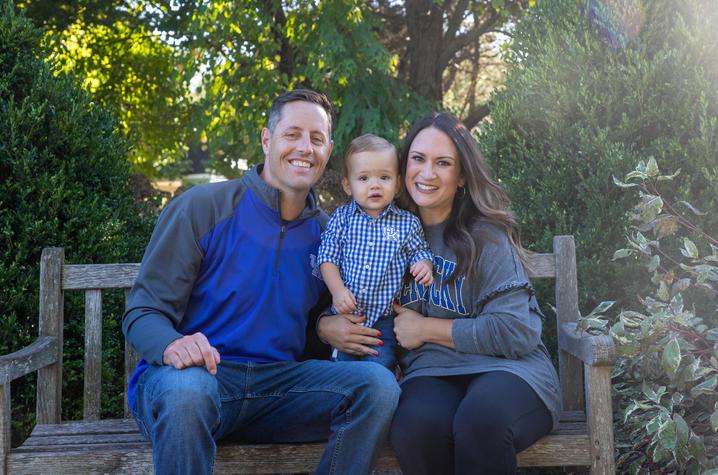 Jeff and Jessica Fugate were preparing dinner while their children played nearby. Their son, Cameron, was playing with a wooden spoon from the kitchen, swinging it around and banging it on pots and pans. But then the Fugates heard Cameron hit the floor, followed by a strange cry.

“He was behind the couch, so we didn’t see what happened,” Jessica explained. “There was no blood, nothing. But with the way he was whining, you could tell he was hurt.”

Cameron refused his bottle and his pacifier. That’s when Jessica knew something was seriously wrong. She called Cameron’s pediatrician, where the nurse could hear Cameron crying in the background.

“She said that wasn’t a normal cry,” Jessica said. “That’s more than he just hit his tooth or his mouth.” The nurse suggested the Fugates take Cameron to UK HealthCare’s Makenna David Pediatric Emergency Center.

After they arrived, they found they were in for a long wait. When Cameron fell asleep, Jessica took that as a sign that he was feeling better and that they could leave. The triage nurse advised them to stay. You’re already here, she said, we can get him checked out.

After an exam and a few tests, the Fugates and the care team had an answer. Cameron must have fallen with the wooden spoon in his mouth because he ruptured his oropharynx, the soft tissue in the back of the throat.

“I was so thankful that we stayed,” Jessica said. “I was so thankful they ran the extra tests because we never would have figured that out. You just couldn’t see the back of his throat to know. There was no blood, no bruising or anything like that.”

Cameron was admitted to Kentucky Children’s Hospital, where Caitlin Fiorillo, M.D., conducted an esophogram to determine how severe the rupture was. Cameron was given a liquid with a contrast material that would show up in the imaging. What they saw was the liquid leaving his oropharynx and going down through the open space in the back of his throat. Had the rupture not been detected, anything that Cameron swallowed would have been trapped in there, potentially going to the space around his heart where it could lead to infection and sepsis.

“It is very unusual to have as extensive of an injury as he did in that area,” said Fiorillo. “We did a CT scan which showed air had traveled from the back of his throat all the way to the space around his heart. Anything that he ate or drank could travel in that same space as the air and cause mediastinitis, or bad infection around his heart.”

Fiorillo and her team wanted to start with a conservative approach and see if the rupture would heal without surgery, feeding him with a nasogastric tube while they waited. After a few anxious days with additional swallow tests and screenings, Cameron could take liquids without them leaking out of his oropharynx. His care team cautiously transitioned to soft foods, and he was able to swallow those as well. After a week in the hospital, Cameron was discharged, five days shy of his first birthday.

“It can be very scary to have your healthy child in an instant have a life changing experience that leads them to a hospital stay and feeding tube in their nose,” said Fiorillo. “It can be very frustrating and anxiety-provoking watching your child suffer. Cameron's hospital stay was a lot of watchful waiting to see if his body would be able to heal the tear in the back of his throat and antibiotics to make sure an infection didn't set in. Fortunately, he did wonderful since his parents brought him in for evaluation and treatment early.”

Looking back on the experience, Jessica is grateful to the staff in the emergency department for suggesting they stay instead of going home, as well as to Cameron’s care team for making his weeklong hospital stay as comfortable as possible.

“No kid wants to be in the emergency room,” Jessica said. “And I think sometimes we get frustrated with the process. I’m just so thankful they were so thorough because it could have gone very, very differently.”