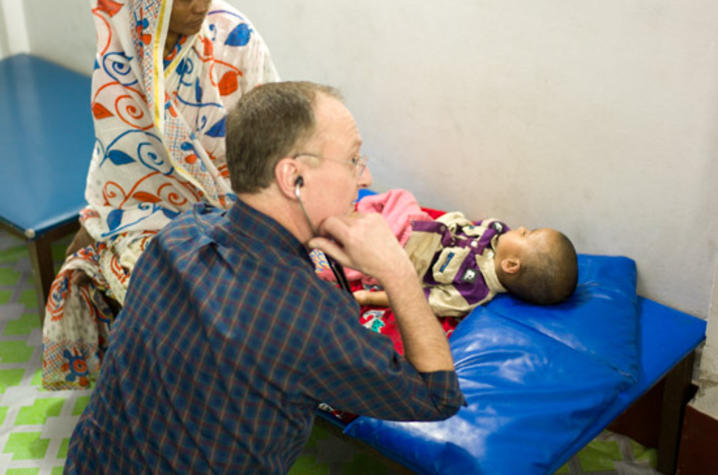 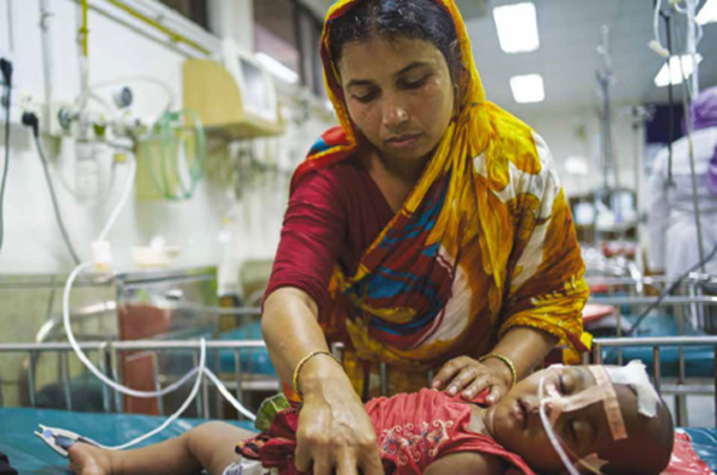 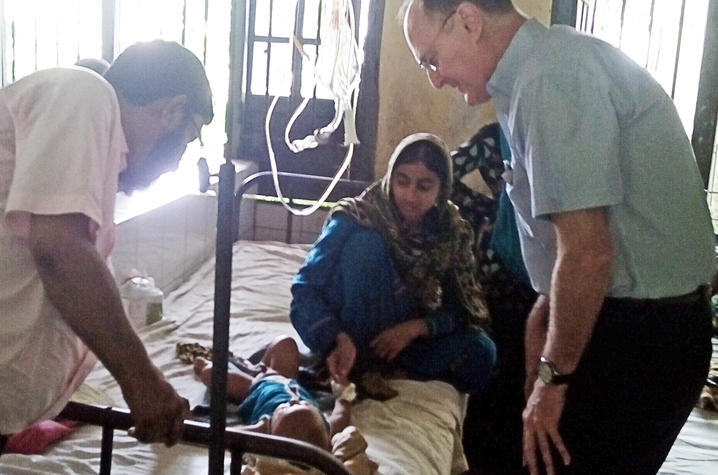 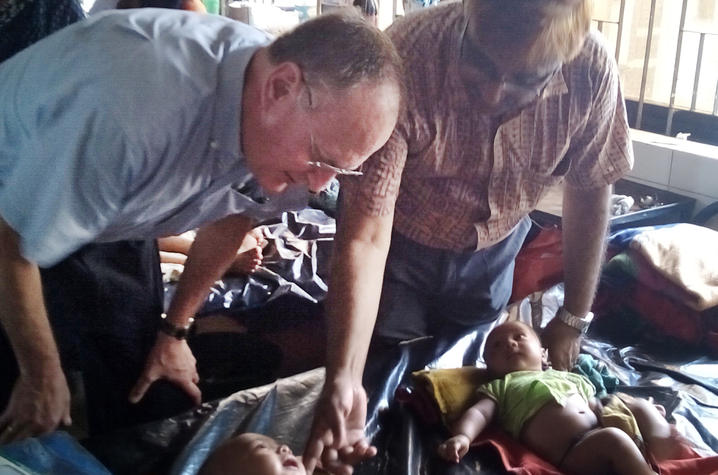 LEXINGTON, Ky. (March 15, 2017) — In developing countries, pneumonia is the leading cause of disease-related death in children ages 5 and younger, accounting for more than 1.25 million child deaths per year. Most of the world’s pediatric pneumonia cases are condensed to Sub-Saharan Africa and South Asia, where the disease is pandemic in Bangladesh.

Bangladeshi children diagnosed with pneumonia often suffer from concurrent malnutrition, an under-treated condition that increases the likelihood of death from pneumonia. In developing countries, more than half of all pediatric deaths in children younger than 5 are associated with a moderate to severe malnutrition diagnosis. Without treating both conditions, children are susceptible to recurrent pneumonia and further health complications leading to death.

After years of research on disease causation and interventions in Bangladesh, Dr. George Fuchs, a pediatric gastroenterologist at Kentucky Children’s Hospital, detected systemic barriers in the Bangladesh health care system impeding care for children suffering from severe pneumonia and underlying nutritional deficiencies. A scarcity of hospital beds, limited pediatric resources and practical barriers, such as the burden of hospitalization on the family, prevent children from receiving sufficient treatment for both conditions. Fuchs and collaborators at the International Centre for Diarrhoeal Disease Research, Bangladesh (icddr,b) with funding from UNICEF and UBS Optimus Foundation, proposed a solution to address these health system barriers and decrease childhood mortality in Bangladesh.

Fuchs, who has studied nutritional deficiencies and interventions in developing countries since the late 1980s, is conducting a multi-site trial to evaluate the effectiveness and viability of systematic treatment method called the Day-Care Approach (DCA). The new pediatric care model responds to a lack of hospital beds and pediatric resources by diverting children with severe illness to outpatient, or day-care, clinics. The day-care clinics provide safe and effective therapies for severe forms of pneumonia and malnutrition, as well as diarrhea and other common illnesses, during the daytime hours. Previous studies in controlled settings have shown the success of the DCA model in treating severe pneumonia and malnutrition. Compared with traditional hospital care, the DCA system model reduces health care costs by a third. Fuchs and his colleagues are now testing a scaled up version of the DCA model in the Bangladesh health care system.

“I realized these children were not getting treatment, and these are really sick kids, so I said, ‘Let’s at least try something else with an outpatient approach,’” Fuchs said. “It has to be better than the alternative, which is no care.”

Since January 2015, Fuchs has collected and analyzed patient outcome data from rural and urban cluster populations randomized to a DCA model treatment verses the existing model of hospitalized care. In the existing health care system, community health workers identify children with pneumonia and refer them to local health clinics, where their symptoms are categorized as moderate or severe. Those children in the moderate category are sent home with 48-hour antibiotics.

However, children presenting to the local clinic with severe pneumonia or who fail the 48-hours of antibiotics are sent to the hospital for supportive therapies, such as airway suction, fluids, nutrition, antibiotics and constant oversight. In the DCA model condition, children receive the same initial treatment, with community health workers locating pneumonia cases and determining severity. However, children with severe pneumonia or who fail antibiotics at home are sent directly to the day-care clinic where they receive supportive therapies throughout the day, but return to their homes in the evening and return the following morning. They are sent to a hospital only if the treatment available through the day-care service fails.

According to Fuchs, an initial set of studies over 10 years indicate the DCA model is a viable and sustainable system with the potential to reduce the rates of pediatric mortality caused by pneumonia and malnutrition. The DCA model is also much less costly for both the health system and families seeking treatment. While data collection is ongoing for the current trial, Fuchs is encouraged by the preliminary analysis.

The DCA system also proved more feasible and desirable for Bangladeshi families. In the traditional Bangladeshi household, the mother cares for multiple children throughout the day while the father works outside the home. As the primary caregivers in the household, mothers confront practical barriers to accessing treatment for one child. The DCA system delivers advanced care so a child doesn’t require a burdensome and costly hospital stay, which families avoid to the point of not seeking treatment.

“The underlying problem is there are not enough hospital beds,” Fuchs said. “Another obstacle is mothers are required to stay with children in the hospital, but they often leave against medical advice or won’t go in the first place because of other important family responsibilities at home.”

Fuchs said health workers in Bangladesh have embraced the DCA intervention as a beneficial treatment system for pediatric pneumonia. If shown successful even when scaled up, the cost-effective DCA model holds the promise of reducing the occupancy of scarce pediatric beds in regional hospitals, which can be used for children with other illnesses. Fuchs and collaborators within the icddr,b and UNICEF are working with government officials and Bangladeshi health agencies to implement the system as a viable and sustainable replacement for the existing pediatric care system.