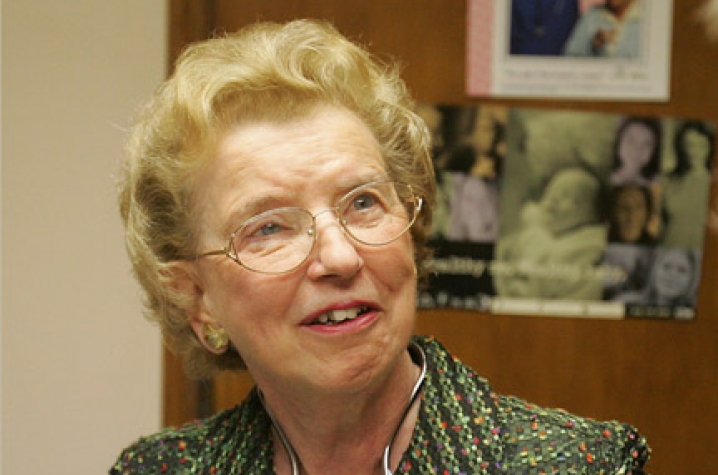 Media Contact: Julie Meador, (859) 257-1754, ext. 256. LEXINGTON, Ky. (Oct. 14, 2010) — When Dr. Jacqueline A. Noonan was being recruited to the newly established University of Kentucky College of Medicine in 1961, she came for an interview. There were very few people in every new department and Dr. William R. Willard, the founding father of the medical center, told Noonan it was important to be interviewed by every chairman. At that time, she was the first pediatric cardiologist in Lexington.

"I came for my interviews in 1961 and even stayed with the pediatric chairman Dr. John Githens," said Noonan. "I was offered an assistant professor of pediatrics position and I said, this sounds like fun to come to a brand new school. The hospital wasn't completed yet and they were attracting outstanding faculty when I came in December of 1961. As I look back now, those were exciting times and I've been here ever since."

Nearly 82 years old, she is now professor emeritus in the Department of Pediatrics at the UK College of Medicine. As a pediatric cardiologist, she still is involved in medicine and many other activities. She volunteers her time to see young patients with sick hearts in Central, Eastern and Southeastern Kentucky. Noonan was chief of pediatric cardiology and served as chair of pediatrics from 1974 to 1992 but continued as chief of pediatric cardiology until she retired in 1999. Noonan, one of the most important individuals in the history of American pediatric care, is internationally known for her description and characterization in 1962 of the genetic disorder now called Noonan Syndrome. She had done extensive research on children with congenital heart disease while she was at the University of Iowa and presented a report in 1962 at the Midwest Pediatric Research meeting. She described a syndrome characterized by distinct facial traits, short stature and congenital cardiac defects. "Dr. John Opitz, who is a well known geneticist dysmorphologist, is the one who named it Noonan syndrome," Noonan said. "He was an intern when I was a new faculty member in Iowa. When he was studying genetics in Wisconsin he would often say, 'That is a female with Noonan syndrome.' Colleagues would ask, 'John, why do you call it Noonan syndrome?' He would say, 'Because that’s what Dr. Noonan taught me.'" The disorder is a subject still close to her heart. She is active in the international Noonan Support Group and has spoken in many conferences and continues to write about Noonan syndrome. In January 1962, Noonan started going out to the pediatric regional heart clinics and went all over Eastern Kentucky. These clinics were sponsored by the state's Division of Chronic Illnesses. Now clinics are supported by the Commission for Children with Special Health Care Needs and some are still held at health departments. The heart clinics were the first UK outreach clinics but now a number of other programs have developed. "Very soon after I came here, we had a heart clinic in Pikeville and at that clinic I saw a girl that I diagnosed with a patent ductus arteriosis (PDA)," said Noonan. "Her name was Margaret Schoolcraft, she was 10 years old, and I referred her down here to have her heart fixed and she was the very first patient admitted to the UK Hospital when it opened in April of 1962. Dr. Frank Spencer was here as our first heart surgeon and Margaret would have been the first surgery but there was adult admitted with breast cancer and the nurses thought that it would be too complicated taking care of a patient with a patent ductus so a breast cancer adult was the first surgery." PDA is a connection between the pulmonary artery and the aorta that is present in everybody before they are born, Noonan explained.  After birth, it normally closes, but sometimes it doesn’t. If it does not close, too much blood goes to the lungs, and if the ductus is large it can cause cardiac enlargement and heart failure. Noonan has received numerous honors and awards. This past year, she attended the 55th anniversary of her alma mater at the University of Vermont Medical School and she received the Bradley Soule Award, which is their highest award. She also received the Lifetime Achievement Award at the third annual Castle Connolly Medical Ltd. National Physician of the Year Awards in 2008 for her 50 years of work caring for children with heart disease. And Noonan was honored by the Kentucky Commission on Women in 2008 with the Kentucky Women Remembered recognition for her exemplary contributions to the state and her influence on the Commonwealth. At the time, Jody Bosomworth, wife of Dr. Peter P. Bosomworth , chancellor emeritus of the UK Albert B. Chandler Medical Center, nominated Noonan for the Kentucky Commission on Women honor for her many years of work caring for children with heart disease.

"Although not born in Kentucky, Dr. Noonan has devoted more than 49 years of her professional life to Kentucky," Bosomworth said. "She is one of the most important individuals in the history of American and Kentucky pediatric care. Her skills in research are highly appreciated by her colleagues for her original description of hypoplastic left heart syndrome and the discovery of what is known as the Noonan Heart Syndrome."

Noonan says when UK Hospital opened, all patients, adults and children, were on the fifth floor. Many children came from Eastern Kentucky and they had all sorts of problems because their families had not been able to afford medical care. She said she saw diseases that were not common in Lexington patients. “Many were malnourished and we saw many rare genetic disorders," she said. "Many of the children had never seen an elevator and often rode up and down. I fell in love with the people of Appalachia and have many happy memories.” For many years, Noonan chaired the UK Department of Pediatrics and helped establish the Kentucky Children’s Hospital. To honor Noonan, an endowed chair was established. "Dr. Noonan has done more to impact the health of Kentucky’s children than anyone else in the history of the Commonwealth," said Dr. Tim Bricker, the Jacqueline A. Noonan Endowed Chair and Professor in the UK Department of Pediatrics and physician-in-chief of Kentucky Children’s Hospital. “Her impact upon pediatric care nationally and internationally has been profound," Bricker said. "We are keenly aware of our responsibility to continue the level of patient care, teaching and investigation at Kentucky Children’s Hospital that she established here. She taught and mentored many medical students and residentss, many of whom have had distinguished careers dedicated to improving the health of Kentucky’s children. And she continues to care for pediatric heart patients throughout Central and Eastern Kentucky, many from families whom she has cared for over several generations." Noonan also serves on the UK College of Medicine Admission Committee and the Institutional Review Board. She continues to teach small groups of medical students in an ethics discussion and is active in the humanities program. In addition, Noonan is active in the community. She is medical advisor for Children's Hospice, also known as Daniel's Care. She serves on the boards of the UK Sanders-Brown Center on Aging Foundation, the Child Development Clinic and the March of Dimes, and is a commissioner for the Commission for Children with Special Health Care Needs. She previously served on boards for the Kentucky American Heart Association, International Book Project, St. Joseph Hospital Foundation and the Philharmonic. Having published over 70 peer-reviewed articles, as well as another 30 invited chapters or reviews, she continues to publish since she says she has more time. Her involvement as a member of the Cathedral of Christ the King in Lexington includes serving as Eucharistic minister, lector and singing in the Resurrection Choir. "During her tenure she organized many pediatric clinics in numerous rural Kentucky counties and personally provided pediatric cardiology services in the clinics, frequently without compensation," said Bosomworth. "Her altruism is widely recognized not only in Kentucky but internationally. Her impact on the health of Kentucky children continues today. Since retiring in 1999 she has remained highly involved.” This year the UK College of Medicine celebrates its 50th Anniversary. This anniversary features a year of celebration in educating the best physicians, providing outstanding care in both urban and rural communities, and conducting breakthrough research. Visit the UK College of Medicine's 50th Anniversary Web site to access anniversary event information, view historical highlights and listen to oral histories of those who helped establish and advance the UK Medical Center.