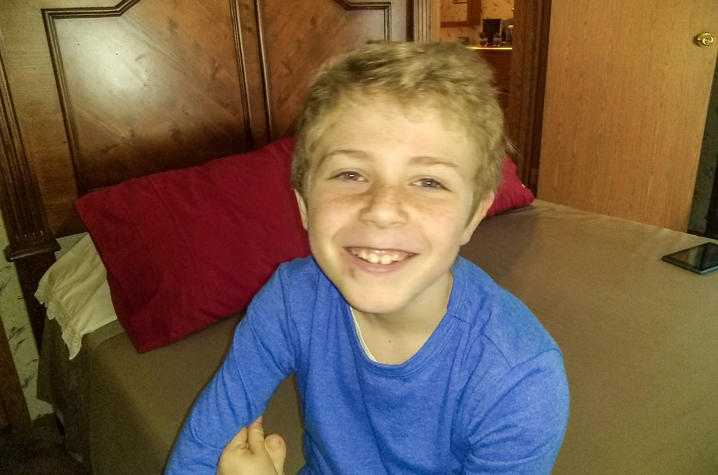 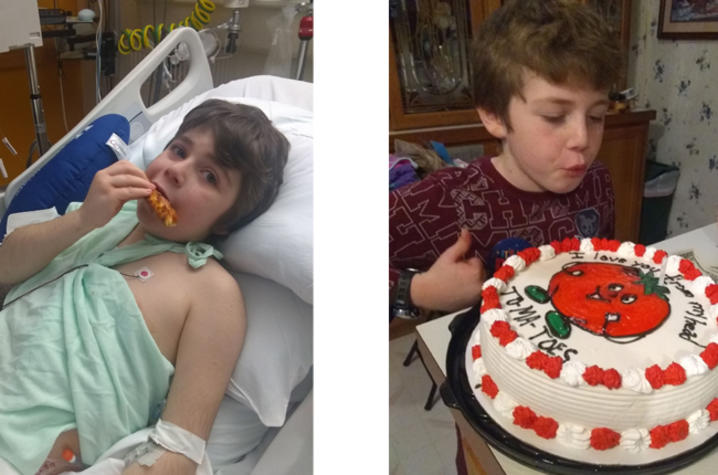 LEXINGTON, Ky. (April 27, 2020) ­– Chance Smith is a fun-loving, good-natured nine-year-old boy. He and his siblings live with his grandmother Sharon in Harlan County where days are filled with bike rides with his sisters and cousins. But one thing that sets Chance apart from his siblings and classmates is that he’s seen the inside of a hospital more than most people will in their entire lives.

When Chance was very young, he was diagnosed with Henoch-Schonlein Purpura, a rare condition that causes the small blood vessels in the skin, joints, intestines and kidneys to become inflamed and bleed. While its cause is unknown, doctors speculate there may be a genetic component.

“This is a condition in which kidney failure happens in about 20% of kids, and only 2% of those will need a transplant,” said Dr. Aftab Chishti, pediatric nephrologist and member of the kidney transplant team at the Universityof Kentucky Transplant Center.

According to Chance’s grandmother Sharon, Chance got progressively sicker and sicker until one day in March of 2018, he had severe swelling in his abdomen. He was transported to Makenna David Pediatric Emergency Center at UK’s Chandler Hospital and diagnosed with End-Stage Renal Disease. He had surgery to place a tube in his abdomen for peritoneal dialysis, a treatment that uses the lining of the abdomen to do what his kidneys couldn’t ­– filter blood to remove waste from his body.

Sharon and her sister Marilyn were trained to do Chance’s dialysis at home. The process takes about 10 hours, during which then seven-year-old Chance would have to watch his siblings and cousins play without him. He would have to continue to have dialysis until a kidney donor was found.

The wait was tough. In the rural area where Chance and his family live, the power can go out for days at a time. The residents of their hometown raised $5,000 for the purchase and installation of a generator for Chance’s house. A series of incidents further complicated Chance’s treatment plan; after all, a seven-year-old boy will do what seven-year-old boys do. An accident on the swingset damaged his port, and he had to spend a week at Kentucky Children’s Hospital (KCH) to repair the port and watch for signs of infection. Another time, his sibling removed the cover to his port, and it was back to KCH to be monitored for infection. Sharon and Marilyn's brother Frank, along with his wife Penny and daughter Meagan, had, according to Marilyn, "the most difficult job" - caring for Chance's siblings and cousins, all under the age of 10, while they were with Chance.

By October 2018, his catheter became inflamed and infected. Chance started hemodialysis, driving with his grandmother and great-aunt from their home in Harlan County to Lexington three days a week for Chance’s treatment – nearly a 1,000 miles a week until they could resume dialysis at home.

“It was very difficult for Chance, physically and emotionally,” said Marilyn Turner, Chance’s great-aunt. “He was terrified of not receiving a transplant.”

In February 2019, Sharon and Marilyn got the call they had been waiting for.

“One night, probably after 11 p.m., they called and said come on down, they had a kidney for him,” Sharon recalled.

In the year since his transplant, Chance has done remarkably well. He recently celebrated the first anniversary of his transplant with a cake. Dr. Chishti and his team continue to see Chance regularly for his follow up appointments, and they have nothing but praise for Sharon and Marilyn.

“These people are saints,” he said. “They have not missed a single appointment. They have done everything they were asked to do and more to take care of Chance. I have nothing but respect for them, and would do anything, if I can, to help and support them.”

Chance is now nine years old, and for the most part, can do most things a nine-year-old boy can do. He knows his limits and restrictions, with support from his siblings, cousins, classmates and teachers. “Anybody in the community that knows him looks out for him,” said Sharon.

However, Chance is no longer allowed to partake in his favorite pastime.

“We live out in the country, and he always played in the river,” said Sharon. “That’s where the kids stay all summer.”

Chance will continue to follow up with his doctors, albeit now via TeleCare. Even remotely, Marilyn speaks highly of Chance’s care team.

“God is always in control, but the dedication of the doctors, nurses and staff have made a lasting impression on our family, church and community.”