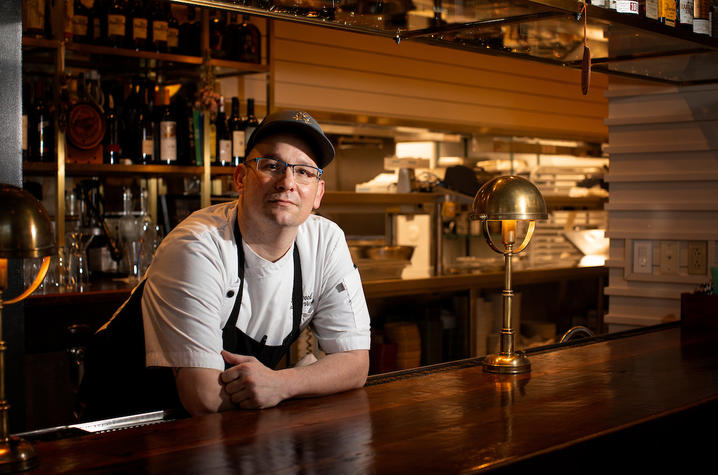 Matthew Varga credits his team of doctors for getting him back to the kitchen after life-threatening heart failure diagnosis. Mark Cornelison | UK Photo

“I cannot imagine doing anything else,” he said. “And it’s not just cooking that I love, it’s the people, too. They are my family.”

Working as a chef at Honeywood, one of Ouita Michel’s newest restaurants at The Summit at Fritz Farm, it is not unusual for Varga to log a more than 80-hour work week. The daily grind keeps him busy and on his feet at the restaurant before he heads home, where he averages between six and seven hours of sleep per night before the cycle starts all over again the next day.

It’s a lifestyle he’s used to and thrives on. That’s why one Saturday morning in August 2019, Varga could tell something was off. He went into work, not feeling like himself.

“I had the night before off, which is odd, but my chef insisted I take a day to rest,” he said. “After climbing into bed from my last shift, I slept for 14 hours – that is not normal for me.”

Exhausted and feeling no relief, Varga visited the doctor – it’s a good thing he did. Blood tests confirmed he had pneumonia and his heart was failing. He was transferred to UK HealthCare’s Chandler Hospital for further evaluation. Varga doesn’t remember much from the time he first arrived at Chandler Hospital but said his sister has helped to fill in the blanks and showed him pictures of his life-threatening situation.

“I saw horrifying pictures of multiple machines attached to me that were essentially running my body for me,” he said. “They did extracorporeal membrane oxygenation (ECMO) treatment, I was on dialysis – the whole nine yards.”

Varga was admitted to UKHC with a heart pump in place. Dr. David Booth, who specializes in cardiovascular medicine in UKHC’s Gill Heart and Vascular Institute, treated Varga after he arrived at the hospital. He, along with Dr. Meenakshi Bhalla, heart failure and transplantation cardiologist and medical director of UKHC’s Preventative Cardiology and Cardiac Rehabilitation, decided to put Varga on V-A, or veno-arterial, ECMO, which supports heart and lung function.

“He came in with cardiogenic shock, which means his heart couldn’t pump enough blood to keep up with his body,” Bhalla said. “Our team determined Varga was suffering from viral myocarditis.”

Viral myocarditis is usually caused by an infection. In some cases, including Varga’s, the infection weakens the heart, which can cause heart failure, even death. Four days after arriving at Chandler Hospital, Varga’s team of doctors met with his family to discuss surgically implanting a left ventricular assist device (LVAD) into Varga’s chest.

The next day, Dr. Rajasekhar Malyala, a cardiothoracic surgeon with UKHC, performed the surgery.

“This machine is a durable heart pump with an outside battery source that allows patients to go home and perform daily activities,” Bhalla said.

As part of his recovery, doctors encouraged Varga to exercise, starting in the hospital, and stick to his physical therapy.

“It was on me to get better,” Varga said. “If that was my ticket out of there, I was all about it.”

Five months after Varga’s life-threatening ordeal, he’s back to work at Honeywood and has not been back to the hospital since.

“When feasible, physical therapy is critical for heart failure patients,” Kolodziej said. “After about a month in the hospital, Matthew was discharged and is, amazingly, back to work. That’s quite a feat.”

Varga said he was ready to pick up his chef knives again, to go fishing, hunting and be back with his friends. He stresses how critical a positive mindset is for recovery.

“I lost my mom to cancer eight years ago. She was a fighter – doctors gave her six months to live and she survived for six years,” he said. “You have to fight. If you want something in life, you have to fight for it and that’s what she did – she fought for her life. Now it’s my turn to fight for mine. She’s my inspiration.”

Now, Varga goes back to the doctor every week to have blood drawn, which helps to determine his medication. His health care team said the plan is to recover his heart or, if necessary, plan for a heart transplant.

Either way, Varga is thankful.

“I’m just floored by the respect and professionalism of doctors at UK HealthCare,” Varga said. “From the very beginning, I genuinely felt cared for, like I was never alone.”