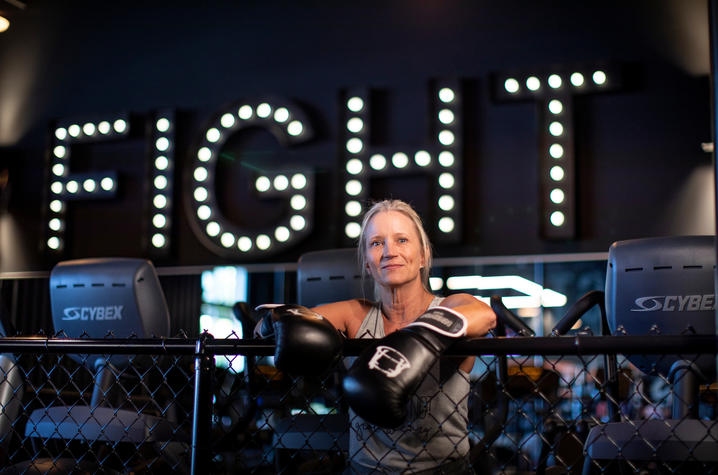 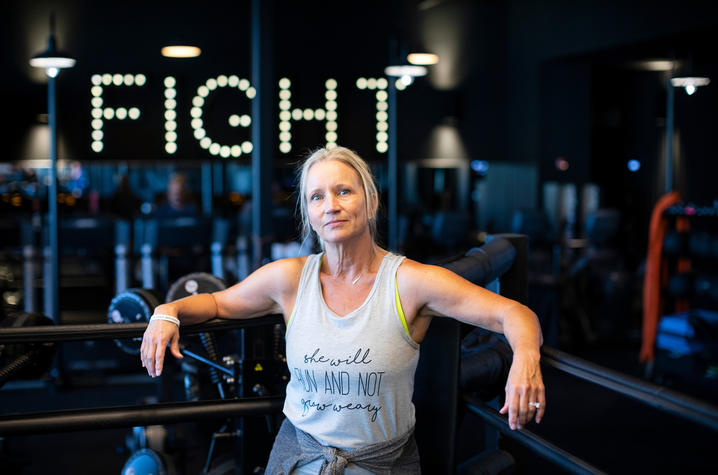 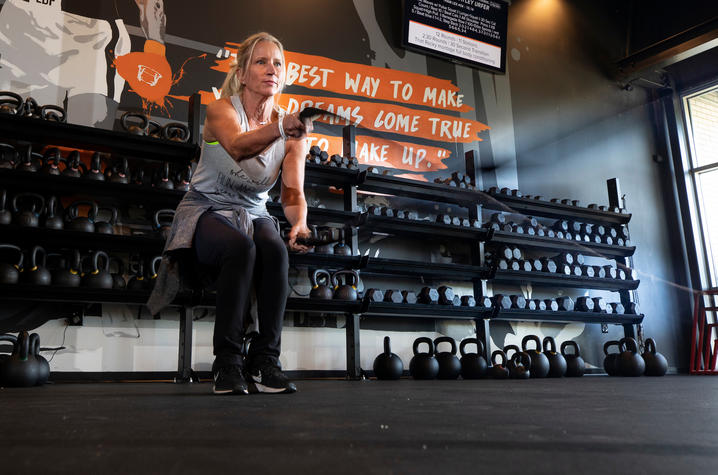 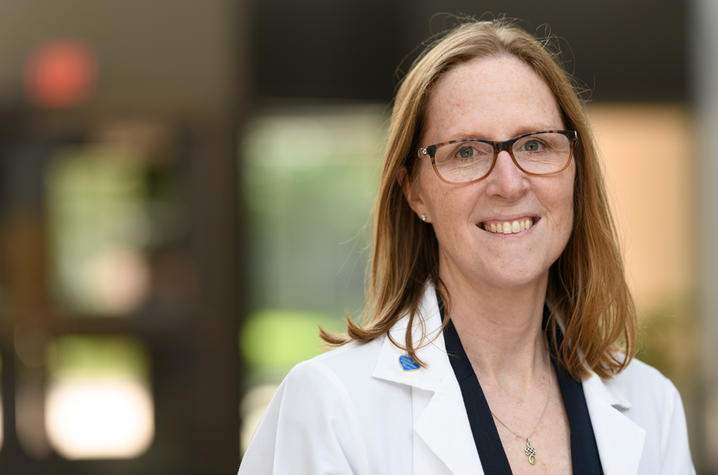 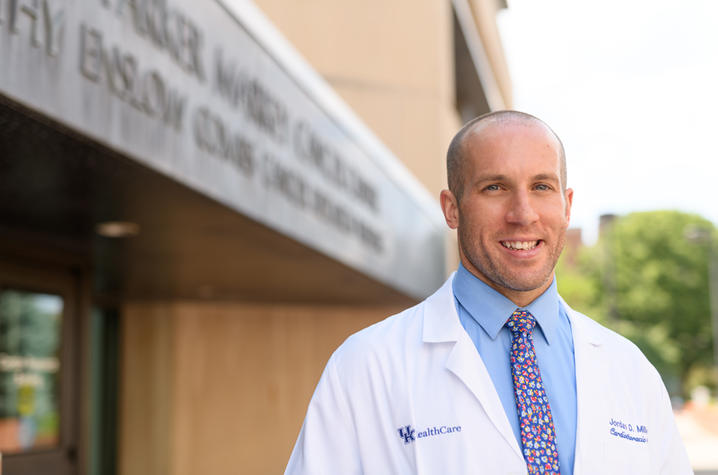 LEXINGTON, Ky. (Oct. 31, 2019) — Picking up a thick set of battle ropes, Lindi Campbell crouches down and knocks out smooth sets of traditional alternating waves, slams and in-and-out waves, pausing only for a moment between sets to shake out the tension in her shoulders. It’s an exercise that would leave most people breathless, but Campbell is barely breaking a sweat.

Her pale gray workout tank says it all: She will run and not grow weary. At a freshly minted 55 years old, Campbell is fitter and more energetic than people half her age. A self-professed cardio queen, her favorite workout is a type of interval training known as Tabata: a relentless four-minute drill that involves pushing yourself to the limit for 20 seconds and resting for only 10 seconds in between.

In other words, it’s not a workout for the faint of heart.

“It’s a workout for people who like to get moving and keep moving,” says Vanessa Sweet, Campbell’s longtime friend and personal trainer. “You get in, work as hard as you can, and get out.”

Then the back of Campbell’s tank top shifts slightly to reveal a long vertical scar running down beneath her shoulder blade. Her level of fitness is even more impressive when you learn that Campbell can do all this while missing more than a third of her lung capacity.

Nearly two years ago, she went in for surgery to remove a suspicious growth in her right lung. She woke up to some sobering news: the growth was cancerous.

Campbell, one of just two immediate family members who had never smoked, had officially become a lung cancer survivor.

Years before she made it to the University of Kentucky Markey Cancer Center, Campbell’s journey began with a trip to her primary care physician after she experienced chest pains and clamminess in her hands.

“I had some suspicions that it was acid reflux,” Campbell said. “But [my doctor] said, ‘Let’s do an X-ray to be sure.’”

After her X-rays came back with “a shadow,” Campbell’s search for answers began in earnest as she sought out a pulmonologist who could define the unusual growth.

Her biopsies all came back negative for lung cancer, but as the spot continued to grow, her doctors urged her to have it removed. Waking up after surgery, Campbell describes herself as “naïve,” not yet thinking about the historically poor survival rates of people who receive that diagnosis (less than half of people diagnosed with lung cancer survive past one year). In fact, she says with a laugh, her first concern was whether or not she’d be able to keep exercising.

After her surgery, she transferred her care to the UK Markey Cancer Center, where her case is closely monitored by medical oncologist Dr. Susanne Arnold and thoracic surgeon Dr. Jordan Miller. Following her initial meeting with Arnold, she knew she was in the right place.

“Every cancer patient is different in terms of what they want out of a doctor, and to me, that relationship was important,” Campbell said. “I can tell she’s vested in my future – it’s not just a job or diagnosis, it feels like a real relationship built on truth, trust and my best interest.”

Lung cancer wasn’t a health problem totally unfamiliar to Campbell – she says her aunt passed from the disease 35 years ago – but it wasn’t something she’d ever worried or even thought much about since. Soon after her recovery, she became “a sponge to all things lung cancer,” educating herself as much as possible on the disease.

When it’s detected early, before it spreads elsewhere in the body, lung cancer is much more treatable. Campbell’s initial diagnosis was stage 1 non-small cell lung cancer, which she considers a blessing. In Kentucky, only 18% of lung cancer cases are diagnosed at an early stage.

Because tumors in the lung can grow very large before they cause symptoms – and the symptoms they cause can be mistaken for less serious health problems, like bronchitis – most people aren’t diagnosed until the cancer is advanced, limiting treatment options.

As the leading cause of lung cancer, smoking is linked to up to 90% of deaths from the disease. Kentucky is also known for high levels of radon, a colorless, odorless radioactive gas that occurs naturally in the soil and is the second-leading cause of lung cancer. Campbell never smoked, but grew up around secondhand smoke and believes she may have also been exposed to radon.

“I didn’t know about radon levels back then,” Campbell said. “But now, with advocacy and education, we know that particular combination, especially in younger lungs or in the lungs of someone who never smoked, can be just as deadly.”

So while she was able to gather plenty of medical and statistical information on lung cancer, she noticed something distinctly lacking: a community. She sought out other survivors, looking for someone who could relate to her experiences, and found herself coming up short over and over.

“I had to really, really dig to find any sort of survivor’s information – there would be blogs out there, but then they would fade out, and you pretty much understand that they had probably passed away,” she said. “But it’s a lonely world. You’re just desperate to find a community of survivors.”

Because so many lung cancer diagnoses are linked to smoking, Campbell says the stigma of the disease also prevented many people from sharing their stories or reaching out for help – because they had smoked, they were ashamed or felt like they “deserved” their diagnosis. But in order to make progress in fighting the disease, she knew more patients would need to start talking.

“When the stigma is being fed, the conversation is not happening,” she said. “It gets thrust back into the shadows over and over again.”

She felt compelled to do something big, knowing there had to be others like her out there dealing with their disease on their own, possibly with no real support. She decided to begin putting her own story out there, determined to begin building a community here in Kentucky.

“I thought, what could I do to pour my energy and my story into something local to raise money and awareness?” she said. “Nobody wants to be the face of lung cancer. But if I’m not going to take this opportunity, who is?”

In January 2019, Campbell founded Breath of Hope Kentucky Inc, a nonprofit organization focused on awareness, prevention, and early detection of lung cancer. Its primary goal is increasing survivorship. It was important to Campbell to also support other organizations throughout the state dedicated to this fight.

On Friday, Campbell and Breath of Hope Kentucky are hosting their inaugural fundraising event, Unite to Fight Lung Cancer in Kentucky. The event is a kick-off to a two-month fundraising campaign aimed at raising money to fight lung cancer and keeping those funds in Kentucky, where they’re needed most.

Unite to Fight provides an opportunity for business and community leaders, medical professionals, and lung cancer survivors and those who have lost loved ones to the disease to come together to share their experiences. In addition to supporting the endeavors of her nonprofit, she has chosen to have proceeds from the event go to the Markey Cancer Foundation (to specifically benefit the Kentucky LEADS collaborative) and the UK College of Nursing BREATHE initiative.

As their first big event, Campbell says the conversations it will ignite are just as important as the funding it brings in.

Kentucky owns the unfortunate distinction of having the worst rates of lung cancer incidence and mortality in the country. As the state’s only National Cancer Institute-designated cancer center, Markey is tackling the problem from every angle – from prevention, to early diagnosis, to leading edge treatments, to survivorship.

As Campbell often reiterates when she shares her story publicly, early detection is key. The UK Lung Cancer Screening Program is available for those who might be at high risk for lung cancer, including current and former smokers. For those whose risk is small (or even unknown), she emphasizes the need to know your own body and seek medical help – and several opinions – if something feels off.

“It’s up to us to be our own health advocate,” Campbell said. “The more awareness that is out there, the more primary care physicians and pulmonologists will be likely to see patient’s symptoms as a possible sign of early stages of lung cancer, even if that person never smoked.”

And although Campbell’s surgery, performed elsewhere, resulted in a double lobectomy, thoracic surgeon Miller says most patients at Markey require less extensive surgery when the cancer is found early.

“Roughly 90 percent of our lung cancer cases are performed through minimally invasive surgery, and we preserve as much of the lung as possible,” Miller said. “The earlier patients come to us seeking care, the higher the likelihood that we can resect the cancer while minimizing how much healthy tissue is removed.”

Meanwhile, Campbell’s own journey is still a work in progress. With the help of Sweet, she worked hard to restore her level of fitness and is back to her favorite fast-paced workouts. She had hoped to be one of the truly lucky ones, to make it to the five-year survival marks with clean scans and no further treatment. But when a CT scan in July showed a few spots in her other lung, she realized she may have to deal with a recurrence of her cancer.

But, Campbell says, she decided she wasn’t going to let that slow her down.

“How is what I’ve been doing any good if I stop talking when things get bad?” she said. “If I’m going to take responsibility for the good pieces of my story, then I have to be willing to share the bad pieces.”

Three weeks ago, Campbell attended the annual UK Markey Cancer Center Affiliate Network Cancer Care Conference in Lexington as a guest speaker. Early in the day, she stood in front of a room full of Kentucky medical professionals and shared her experience; just hours later, she was in Markey’s Multidisciplinary Thoracic Clinic for an update on her latest scans from Drs. Arnold and Miller.

Her presentation ended on a determined, positive note as she was preparing herself for the appointment: “You haven’t seen the last of me, and I am certain you have yet to see the best of me.”

Luckily, her visit with Arnold and Miller provided some positive news – her scans showed no new growth of the nodules in her lung – and she’ll repeat the process again in four months. It’s a win she’ll take for now. But in the meantime, she’s got a community to build and grow.

“I knew that I had to start somewhere,” she said. “Even if you start something, and you’re the only person, it’s like the quote from the movie ‘Field of Dreams’: if you build it, they will come.”