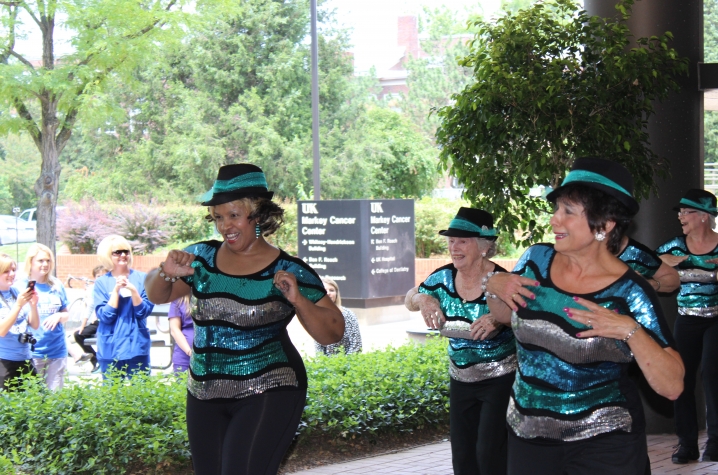 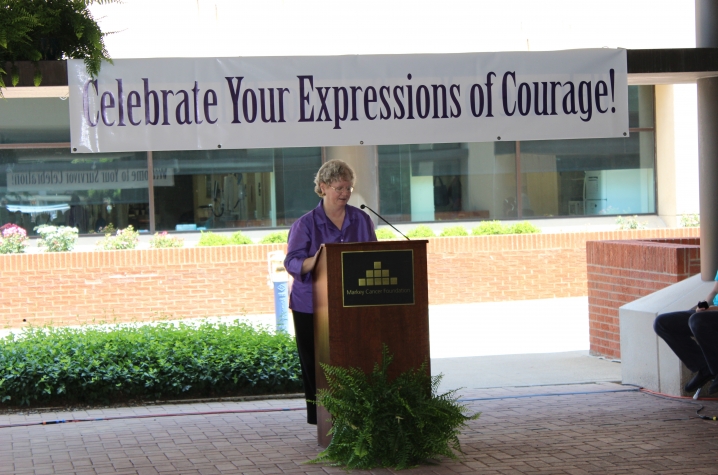 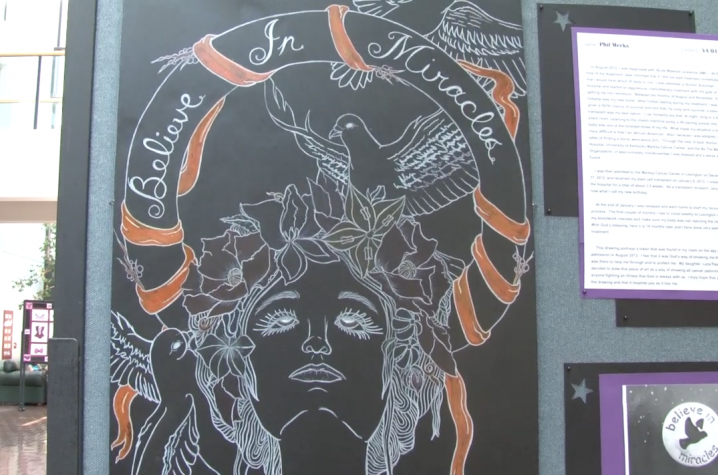 Video by Allison Perry, UK Public Relations & Marketing. To view captions for this video, push play and click on the CC icon in the bottom right hand corner of the screen.  If using a mobile device, click on the "thought bubble" in the same area.

LEXINGTON, Ky. (June 18, 2014) —  Facing a cancer diagnosis is no easy feat. Patients at the University of Kentucky Markey Cancer Center have always inspired the community with their strength and courage, and Friday, June 6th was no exception, as Markey honored the experiences of those who have battled cancer with a day of recognition and celebration.

June is National Cancer Survivorship Month, and to mark the occasion, Markey held its inaugural Expressions of Courage event, an art exhibit showcasing original, artistic expressions connected in some way to an experience with a cancer diagnosis, or crafted by or in memory of a Markey patient whose battle has ended.

"We sent out over 6,000 letters," said Cindy Robinson, a nurse practitioner at Markey and one of the organizers behind the event. "And we asked people for any type of creative modality that they wanted to share with us, to share their cancer journey, whether it be positive or negative."

The creations were on display all day in the Combs Research Building at Markey, with readings and performances starting in the afternoon and continuing into the early evening.

"The artwork is very moving and inspiring, and actually will bring tears to your eyes if you read some of the pieces," Robinson said. " We have some pieces here from patients that are no longer with us, and we personally know those people."

Expressions of Courage was made possible by gifts from the Markey Cancer Foundation and Biological Systems Consulting, Inc. With the help of Carla Repass, the assistant director for administration at Markey, and fellow Markey staff members Christie Daniels, Valeria Moore and Mincha Parker, Robinson said she felt they planned and pulled off the cancer center's first-of-its-kind celebration with flair.

"I think for our inaugural event, it's gone beautifully," Robinson said. "We have a lot of survivors here. They've shared their joy."

Shawna Cassidy Quan of Richmond, Ky., was one of the survivors in attendance, having been diagnosed with four different primary cancers over the course of fifteen years. Her expression of courage was an essay about her struggles with her multiple diagnoses.

"You figure out the answers to a lot of your problems even while you're sitting down writing," Quan said. "It's just been a wonderful, therapeutic thing for me."

Norton Cancer Center and Markey patient Phillip Meeks traveled nearly two hours from Jeffersonville, Indiana, to attend the event. Meeks' art piece, a drawing by his daughter, was inspired by the unlikely good fortune of his treatment. In 2012, he was diagnosed with acute myeloid leukemia, requiring a bone marrow transplant to survive.

As an African-American — a population which only makes up roughly 7 percent of the bone marrow registry — and an adoptee without biological siblings or parents to get tested, the odds of finding a match were against him.

The day he was admitted to the hospital, Meeks said, they found a token underneath his hospital bed: one side said "Believe in Miracles" while the other side said "Faith."

"To me, that was God's way of saying that I'm there with you, you know, don't be scared," Meeks said.

A donor match was found for him, and he received his life-saving transplant in January 2013. He notes that Expressions of Courage was not only a day to showcase talent, but a day that survivors could show their appreciation to the staff of Markey.

"I just want to give back," Meeks said. "That's my big thing. How can you thank so many people that are involved in saving your life? There's not a gift that you can give that's big enough. Hopefully this is my one little piece to say thank you for everything that everybody has done for me."

Many survivors and their families expressed their appreciation of the love and support of the UK and Markey community.

"You live life just as fully as you can, because you're not promised even another hour," Quan said. "I think we've done that today… I hope Markey does this again and keeps on doing it."