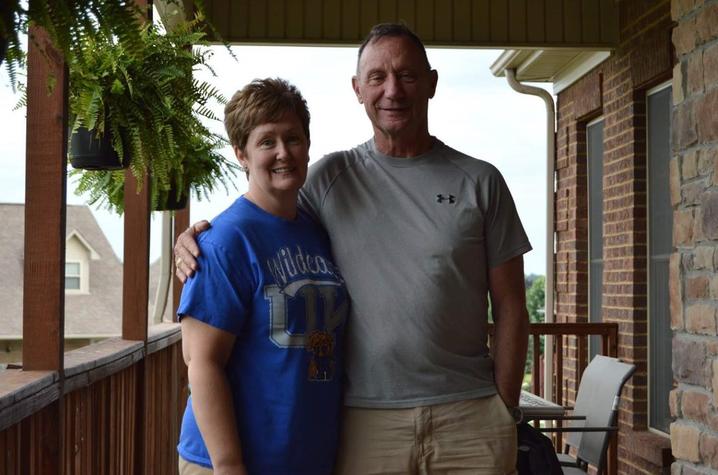 Annette and her husband.

LEXINGTON, Ky. (May 31, 2017)  —   She was told, "enjoy the time you have left with your family; there’s nothing more we can do.” These are words no cancer patient hopes they’ll ever hear. But those were the words Annette Osborne heard from her oncologist. After battling cancer, and being declared cancer free once before, she was faced with missing out on more time with her husband and watching her grandchildren grow up.

Initially, Osborne had ignored the symptoms that turned out to be cancer. As she cared for her ailing father, it was easy to write off the aches and pains. When she noticed abnormal bleeding, she sought a medical opinion from her gynecologist. She was told it was likely nothing to be concerned about, just a small tear that would likely heal itself. When the problem persisted, she returned to her physician and eventually found out what the issue had been, vaginal cancer.

If she wasn’t ready to end her cancer treatment, if she wanted to keep fighting, Osborne’s doctor did have one more option. A doctor at the University of Kentucky Markey Cancer Center was doing some innovative treatments. Osborne took the opportunity and in early 2016 came to see if Dr. Jonathan Feddock could give her more time with her family.

Feddock, an assistant professor in the Department of Radiation Medicine, was the only physician in the area providing a brachytherapy treatment known as permanent interstitial implants. Brachytherapy, a type of internal radiation therapy, uses radiation to destroy cancer cells and shrink tumors. While brachytherapy is a common treatment option, the use of permanent seeds which, in Osborne’s case, were placed free-handed inside the vagina, were not.

According to Feddock, the general opinion among most oncologists is that once a patient develops a recurrence of their cancer and it is in a part of their body that has been radiated before, there is no curative treatment other than radical surgery. But access to an NCI-designated cancer center and physicians who conduct research on new treatment options is part of the reason Osborne is alive today.

“It’s the small things that I appreciate, like a beautiful spring day and the chance to enjoy the sun. This disease has taken so many people that I know; I take the chance to enjoy anything I can.” Osborne is doing better than she could have ever imagined. She’s been able to watch one of her daughters become a mother, attend sleepovers with her granddaughter and have countless other experiences she didn't expect to have.

Feddock has a positive outlook on her prognosis as well. “Our own results suggest that if there is no sign of cancer coming back after six months, then most women tend to do well," he said. It’s been more than a year since Osborne’s treatment. Feddock continued, “so in her case, I am hopeful that this cancer is behind her.”

Osborne is excited for what the future could hold for her. A nurse by training, she’s interested in working with cancer patients when she returns to work. “I’ve been thinking about going back to the health care field; there may be more schooling in my future,” she said. Her experience as a patient, who was told the end was near, is something Osborne believes will make her a compassionate health care provider.

Osborne has been back at the gym and preparing for her healthier life. She’s excited to be preparing for her first 5K. A referral to Dr. Feddock, and an unwillingness to give up are what she credits for having the chance to enjoy the rest of her life, and she plans to.