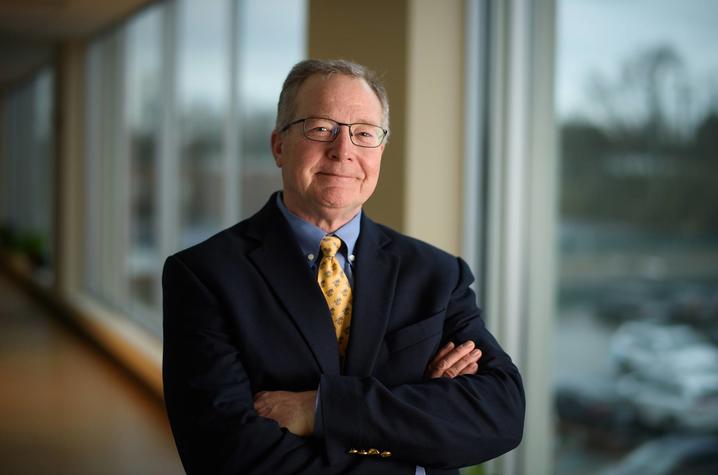 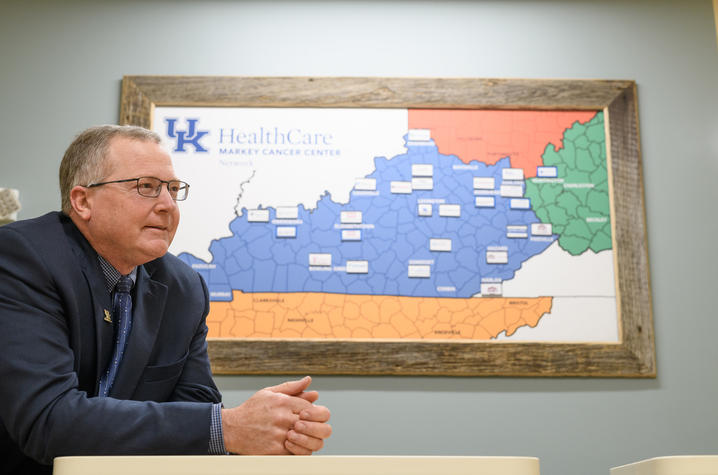 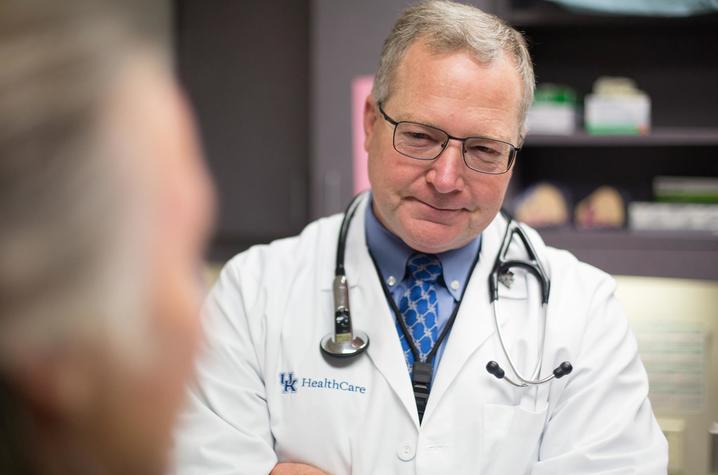 LEXINGTON, Ky. (Oct. 28, 2020) — The University of Kentucky’s Dr. Tim Mullett wears many hats: doctor, medical director, thoracic surgeon, retired U.S. Army Reserve colonel, cancer survivor, father, grandfather and husband. The desire to serve motivates him in nearly every aspect of his life, from his 27 years in the Army Reserve to his efforts to reduce the significant burden of cancer in Kentucky.

Beginning Friday, Mullett takes on another role, this one on a national stage: chair of the Commission on Cancer (CoC), a program of the American College of Surgeons (ACOS). Established in 1922, the CoC is a consortium of professional organizations dedicated to improving survival and quality of life for cancer patients. As CoC chair, Mullett will lead the program in establishing accreditation standards to ensure quality, multidisciplinary and comprehensive cancer care delivery in health care settings.

It’s a topic with which he is already very familiar – as medical director of the UK Markey Cancer Center Affiliate Network, Mullett has witnessed many community hospitals across the state earn CoC accreditation, the quality standard required for MCCAN membership. These standards have helped Kentucky hospitals of all sizes to achieve better, more consistent cancer treatment standards, he says.

“To say I’m honored to take on this role would be an understatement,” Mullett said. “In the past 15 years, I’ve seen how the Commission on Cancer has influenced the standards of cancer care and moved us toward a more patient-centered approach to treatment. One of the real advantages of CoC accreditation is that it can be applied to programs that are doing less than 100 cases or programs that are doing 5,000 cases – it doesn’t matter how big or small they are.”

Mullett came to the University of Kentucky in 1996 as a cardiothoracic surgeon treating problems of the heart and lungs and was responsible for establishing UK’s lung transplant program. But soon, he saw a need to focus his efforts around another disease that has devastated the Commonwealth for decades: lung cancer.

He developed a practice as a dedicated thoracic surgeon who worked primarily with lung and esophageal cancer patients and served as surgical director of the Multidisciplinary Lung Cancer Clinic at the UK Markey Cancer Center from 1998 until 2013. For the past 14 years, he’s also served as chair of Markey’s Cancer Committee, which has been instrumental in developing initiatives and programs to increase cancer survival rates. Since low-dose CT screening for lung cancer was cleared by the Food and Drug Administration in 2015, many of his efforts have focused on increasing access to these screenings across the state.

“We are one of the leading states in the country with the effectiveness of lung cancer screening,” Mullett said. With the expansion of precision medicine and our efforts and research in that area, I think we’re tackling lung cancer with great effectiveness.”

While fighting back against cancer has occupied his professional life for more than two decades, the battle also became personal back in 2012. On his way home from a tour in Afghanistan, he noticed an unusual lump in his abdomen.

“I knew something was wrong,” he said. “I’d felt too many livers and knew that this was not the way it was supposed to be.”

An ultrasound confirmed his worst fear: multiple masses on his liver. Diagnosis: a late-stage gastrointestinal stromal tumor, known as a GIST. Surgery was not an option, but his colleagues at the UK Markey Cancer Center used precision medicine to tailor a different approach for Mullett.

“There was only one medication at that time that was available for the type of cancer that I had, and it was a targeted therapy that worked on that tumor,” he said. “Thankfully, I had the right mutation and the right makeup of my cancer, and the treatment was incredibly effective.”

Within a few months, this potentially terminal disease abated. Thanks to that targeted treatment, today Mullett is cancer-free and able to continue his service in helping others achieve the same.

With his new role chairing the Commission on Cancer, he’ll have the opportunity to positively impact cancer care for patients not just in Kentucky, but across the nation. He says the CoC will begin implementing new surgical standards for cancer care soon, and expects to work on both addressing health disparities and increasing participation in national clinicals trials – especially for more rural areas.

“I want us to see cancer programs use the tools and data available from the Commission on Cancer and National Cancer Database to identify disparities in cancer care and find methods to address those,” Mullett said. “And one thing that is particularly important for Kentucky – and also across the country – is making sure that we’re increasing collaboration with rural hospitals to offer comprehensive cancer care.”