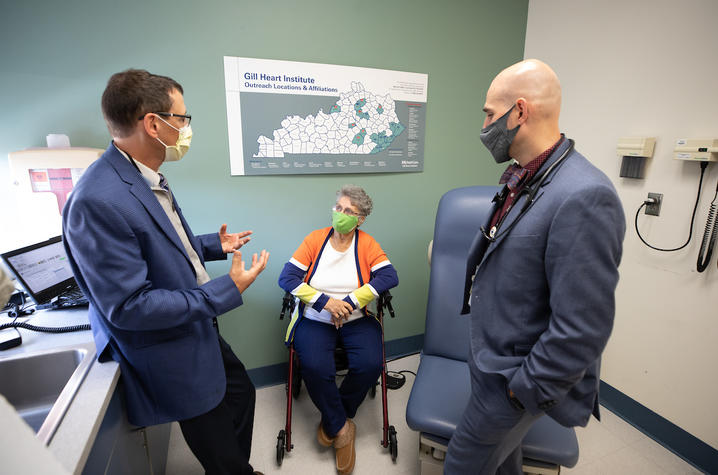 LEXINGTON, Ky. (Nov. 10, 2020) — Imagine going to the doctor and finding out you had a heart attack without knowing. That was Carolyn Snow's reality 15 years ago.

During a normal check-up, Snow's family physician heard a heart murmur that was concerning, so she referred Snow to a cardiologist. After extensive bloodwork and numerous tests, it turned out that Snow, from Lincoln County, was in fact having a heart attack.

"I had no symptoms and did not even know I had heart problems until I went to the doctor," Snow said. "I was shocked."

Cardiovascular disease runs in Snow's family, including in her mother and two brothers, but it was still a surprise when she learned of her own heart troubles. Snow's life changed after she was diagnosed with heart failure.

Nearly five million Americans live with heart failure, also called congestive heart failure. A failing heart keeps pumping, but not as efficiently as a healthy heart, which means that it cannot pump out all of the blood that enters it. This causes blood to collect in the vessels and fluid to accumulate in body tissues, therefore not allowing enough oxygenated blood to meet the needs of the body's other organs. Patients with congestive heart failure are more likely to have dangerous abnormal rhythms that can be deadly.

Those with advancing age, diabetes, poorly controlled high blood pressure, a family history of congestive heart failure and a history of alcohol abuse are more susceptible to experiencing heart failure.

The most common signs of congestive heart failure are shortness of breath, fatigue and swollen ankles or legs. Patients often experience weight gain because of fluid buildup in the body.

Since her diagnosis, Snow has had several surgeries performed by Dr. Aaron Hesselson, the director of Electrophysiology Services for UK HealthCare (UKHC) and the UK Gill Heart & Vascular Institute, who specializes in complex cardiac ablation and device management of congestive heart failure. An Implantable Cardioverter Defibrillator (ICD) was placed in Snow's chest during her first surgery. The device works by constantly monitoring the heart for dangerous abnormal rhythms. If one of these rhythms is detected, the device can send a shock to the heart to try to correct the rhythm and potentially save the person's life.

During Snow's most recent surgery in June, Hesselson chose a new therapy, called Cardiac Contractility Modulation (CCM). This device delivers precisely timed electric pulses, which help to increase the contractility of the heart to help it squeeze stronger. He implanted the CCM device, called the Optimizer.

"The Optimizer is a game-changer for heart failure patients," Hesselson said. "This type of therapy works best in patients before they are in advanced stage of heart failure to help reduce the amount of medication they require."

About 3,500 patients nationwide have the device so far. Snow is UKHC's first patient to receive the CCM therapy. Patients are able to recharge the device on their own at home once a week.

Snow said she feels like a new woman with more energy and less fatigue and shortness of breath.

"I felt the difference less than two weeks after the surgery," Snow said. "I get so emotional when I talk about Dr. Hesselson. I call him my 'angel.' He has not steered me wrong about anything. If he says I need something, I go with it - I trust him completely."

"We stay with these patients for the rest of their lives," Kolodziej said. "They become like family, so it's always rewarding when we can extend their life expectancy."

Snow believes Hesselson and Kolodziej's teamwork saved her life. She also credits the UKHC nurses who helped her throughout her various visits, including Melissa Jones, Ruth Ann Tanner, Monica Adair and Stacy Ford.

"I truly believe that I would not be here today if it weren't for their work and guidance," she said. "They have been there with me through thick and thin and I am forever grateful."