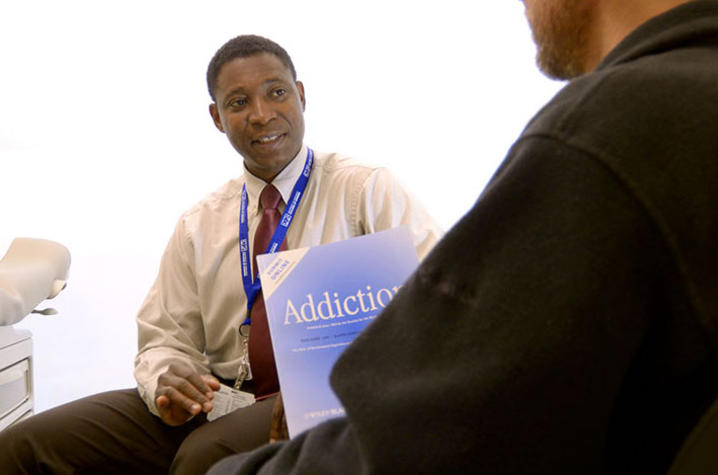 LEXINGTON, Ky. (Jan. 12, 2017) — University of Kentucky College of Nursing Assistant Professor Chizimuzo Okoli picked up his first and last cigarette when he was 6 years old.

The mistake landed him in the emergency room. But the experience inspired his life’s work studying mental illness and substance use among marginalized and underrepresented populations.

Many people living with schizophrenia, bipolar disorder and other severe mental illnesses do not have access to tobacco treatments derived from evidence-based research.

“There are many reasons for that, but I believe it is primarily because of the stigma that comes with their illnesses, which has caused them to be neglected,” Okoli said.

Okoli found that the smoking rate among people with mental illness in the U.S. had stayed the same since the 1950s, compared to a decrease in population smoking rates overall – an alarming fact that lit a fire in him to dig deeper and get to the root of the problem.

“These patients don’t die from schizophrenia or bipolar disorder – they die because of COPD (chronic obstructive pulmonary disease), cardiovascular disease or cancers primarily related to tobacco use or secondhand smoke exposure,” Okoli said. “I wanted to bring tobacco treatment to this population because they’ve been severely underserved.”

“Patients living with schizophrenia often smoke to reduce side effects of their psychotropic medications,” he said. “But it also allows them to sensory-gate for a short period of time, meaning they are able to concentrate more easily.”

As the director of Tobacco Treatment Services and Evidence-Based Practice at ESH, Okoli got involved in the hospital’s PALS (Providing Acceptance, Love & Support) program that aims to boost patient morale and mood through community engagement. The program was initiated in July 2015 by ESH nursing staff when they realized only 10 percent of the approximately 2,900 patients ESH treats every year receive visitors.

“Volunteers for PALS provide friendship and support to patients. They spend one-on-one time playing games, reading or simply talking and listening,” Okoli said. “Afterward, we look at patient, volunteer and staff satisfaction to understand their experiences and identify if the volunteers’ perspective toward patients, particularly stigma, has altered.”

Okoli also serves as the director of the Tobacco Treatment and Prevention Division of the Tobacco Policy Research Program. In this role, he has addressed secondhand tobacco smoke exposure policy in indoor and outdoor public spaces as well as using biomarkers of tobacco exposure. Okoli was an integral part of the research team assisting his mentor Ellen Hahn, the Marcia Dake Endowed Professor of Nursing, in the implementation of Lexington’s smoke free law in 2004.

“Dr. Okoli is an exceptional colleague and scientist. His caring and compassion for helping individuals with mental illness quit using tobacco is the driving force for his timely and important research program,” Hahn said.

Okoli was living in Qatar when he received his initial acceptance letter from the University of Kentucky, where he received a bachelor’s, master’s, doctorate and master’s of public health.

“It was certainly the most welcoming letter I received – it said ‘Congratulations! We’re looking forward to seeing you.’”

Prior to that, he lived in Nigeria, where he was born. He completed two postdoctoral research fellowships in Canada after studying at UK. His research career flourished in Vancouver, where he was involved in opening a clinic for tobacco treatment for people with substance use disorders and mental illness. Now, in 2016, there are 13 of these clinics open in Vancouver.

“Dr. Okoli’s dedication to serving those who need it the most is uplifting and resonates so well with the nursing profession. He has truly found his calling and we are honored to stand alongside him in his endeavors to change the stigma around those with mental illness and substance use disorders,”said Janie Heath, dean and Warwick Professor of Nursing.