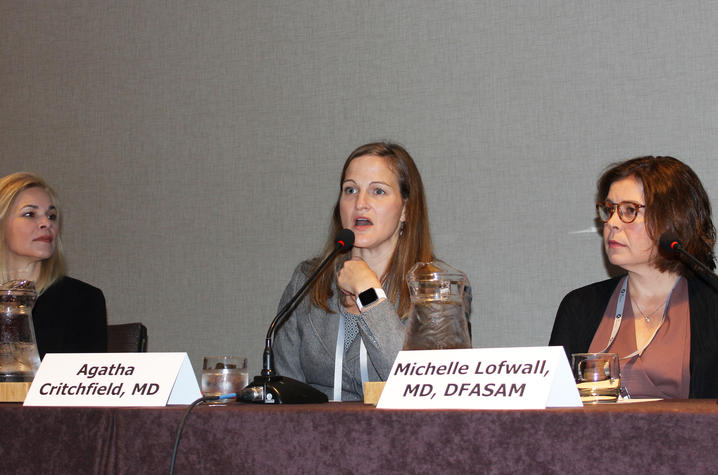 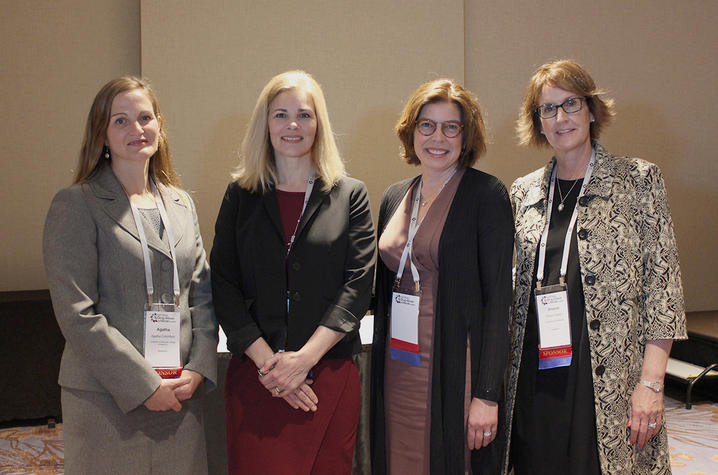 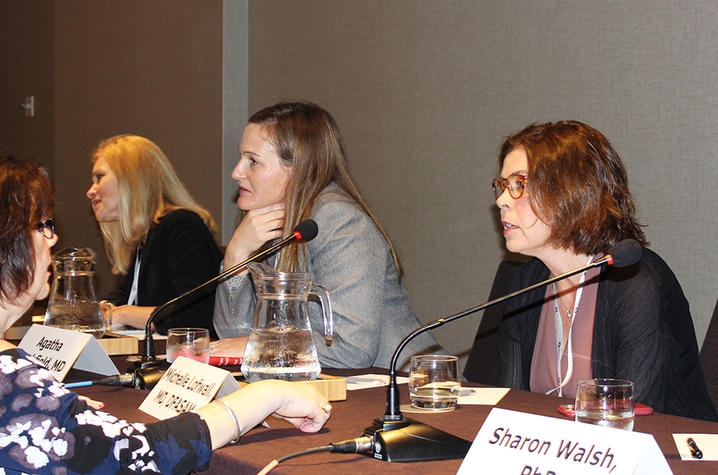 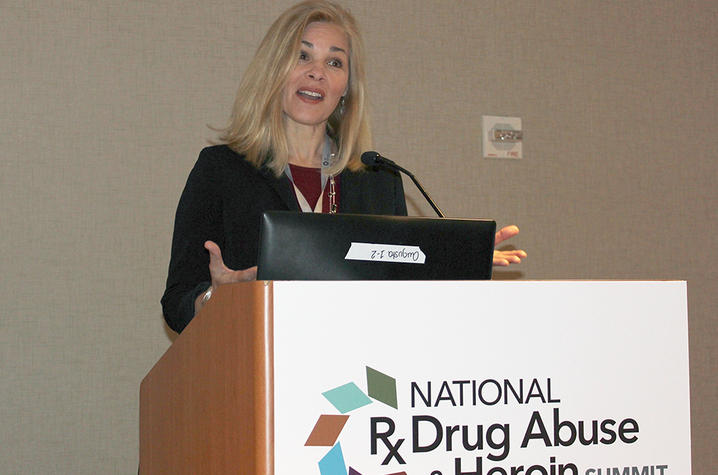 Atlanta (April 19, 2017) — After years outside of Kentucky, Dr. Agatha Critchfield returned to her home state to find a patient population inundated with opioid use disorders.

As an obstetrician at UK HealthCare, Critchfield was attending to the deliveries of women addicted to opioids and whose babies were diagnosed with neonatal abstinence syndrome (NAS), a constellation of symptoms often arising in babies after opioid exposure in the womb. The burden of NAS and an untreated opioid use disorder caused devastating outcomes and long-term complications for the mother, child and family.

“My experience on the labor hall was a substantial number of women were dealing with substance abuse,” Critchfield said during a presentation at the National Rx Drug Abuse and Heroin Summit on April 18.

Unsettled by the void of health care resources available to these women, Critchfield connected with addiction medicine psychiatrist Dr. Michelle Lofwall in the UK Center for Drug and Alcohol Research. A clinician and researcher, Lofwall tests the efficacy of medical treatments for opioid use disorders, including novel formulations of buprenorphine. She reviewed previous research demonstrating that patients receiving buprenorphine maintenance for opioid use disorder treatment were more likely to remain in treatment and less likely to die of a drug overdose than those receiving buprenorphine detoxification. An effective treatment program for pregnant women required a comprehensive approach that included maintenance pharmacotherapy. Critchfield and Lofwall developed a treatment protocol employing buprenorphine maintenance throughout the stages of pregnancy and early motherhood.

On the same campus, Kristin Ashford, the assistant dean of research in the UK College of Nursing, was implementing a nurse-led group care program for pregnant women suffering from addiction. A former labor and delivery nurse, Ashford sought to improve pregnancy outcomes through a nurse navigator network that integrated group prenatal care and education with comprehensive substance use treatment and complex care navigation. However, Ashford’s intervention lacked a physician champion to prescribe medication-assisted therapy. After acquiring the credentials to prescribe medication-assisted therapies to pregnant women, Critchfield was prepared to fill that role. Lori Shook, a neonatologist at Kentucky Children’s Hospital, joined the project to guide the pediatric care and withdrawal treatment for babies born to mothers in the intervention.

Through a fortuitous merging of ideas, expertise and perspective, the four UK providers created the Perinatal Assistance and Treatment Home (PATHways). The PATHways program integrates evidence-based knowledge through a comprehensive approach to perinatal opioid use disorder, offering buprenorphine maintenance treatment for opioid use disorders, NAS, peer support and education, legal support, prenatal and post-natal health services for mother and baby, and health system navigation during delivery. Perinatal nurse facilitators are the “glue” that binds the intervention model, as they educate, navigate and advocate for pregnant women participating in the program.

PATHways participants engage in weekly pregnancy education sessions led by the nurse navigator and prenatal appointments at the UK HealthCare Polk-Dalton Clinic. In addition to receiving treatment for an opioid use disorder, the patients receive training on maternal-fetal bonding, soothing and swaddling, breast-feeding, smoking cessation, expectations for a baby experiencing withdrawal and other essential skills for transitioning to motherhood. Health providers also address the complicated psychosocial problems and other medical and psychiatric comorbidities that are common in this population, such as trauma. Once babies are born, neonatologists ensure mother-baby pairs are engaging in healthy practices, such as early skin-to-skin bonding and breastfeeding, rather than isolating mothers from babies.

Three PATHways researchers presented preliminary results pointing to the success of the program during the sixth annual National Rx Abuse and Heroin Summit on April 18. Since the program launched in 2014, more than 150 women have received treatment through PATHways. Of those participants, 77 percent were admitted to labor and delivery testing negative for all illicit drug use. In addition, the researchers found an association between attendance at prenatal sessions and illicit drug use. For every one-session increase in attendance, a mom was 13 to 18 percent more likely to have a negative illicit drug urine test upon delivery or at a follow up appointment. Lofwall said the transdisciplinary program provides comprehensive medical treatment while building a supportive network around women and preparing them to take ownership of their important role as a mother.

The preliminary results contribute to evidence informing the development of comprehensive treatment programs designed specifically for pregnant women diagnosed with opioid use disorder. Few programs in the country integrate multiple areas of expertise and perspective to develop a multi-pronged treatment approach specific to this population’s many needs.

"The organic development of this program illustrates that you don’t need a large organization with many players to make a big difference in the health of this vulnerable population," Sharon Walsh, director of the Center on Drug and Alcohol Research and moderator of the vision session, said. "You only need a few people who really care and want to make a difference."

As the most convincing evidence of the program’s success, the women undergoing treatment are reporting positive outcomes and better lives as the result of their participation. The researchers also presented comments from Kelsey, a participant who delivered her baby while in the PATHways program. She attested that the program gave her a second chance at being a mother.