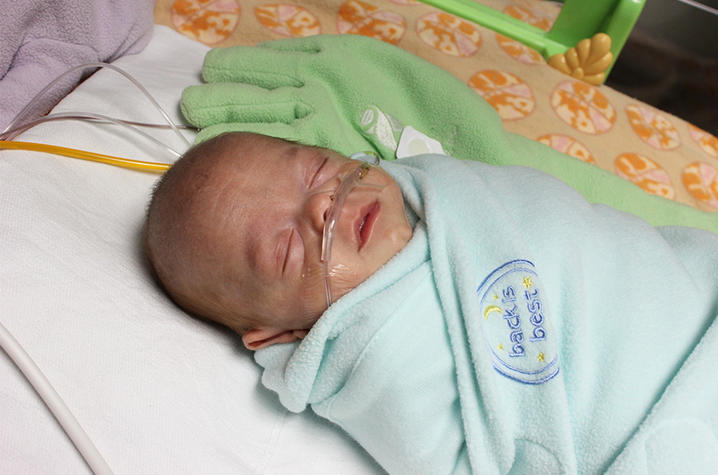 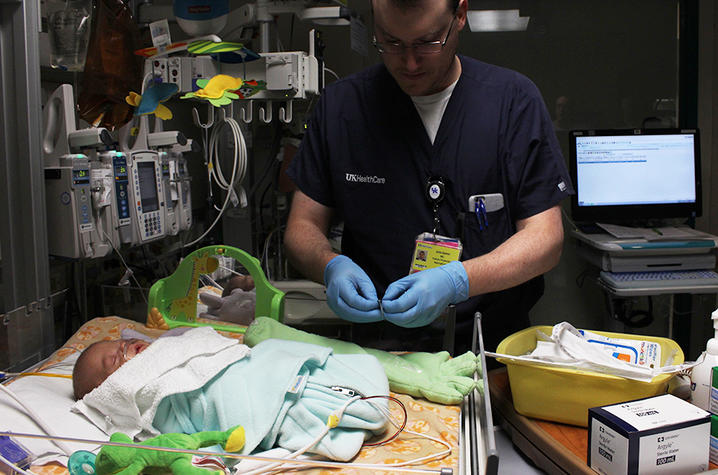 LEXINGTON, Ky. (May 12, 2017) — Pulling away the seal of a fresh aromatherapy patch, Dr. John Daniel took a deep inhalation as the fragrance of lavender and chamomile essential oils permeated his surroundings.

Daniel was ending an overnight shift in the neonatal intensive care unit (NICU), and one waft of lavender was enough to calm his senses and induce a state of relaxation. While popular with pediatric residents, fellows and nurses in the NICU, the aromatherapy patches are meant to soothe and mitigate stress in the hospital’s smallest and most agitated patients — babies suffering from drug withdrawal.

Demonstrating how babies receive aromatherapy as part of their medical treatment, Daniel applied thumbnail-size patch to the “palm” of a floppy green pillow called a Zaky arm. The Zaky arms, which mimic the feeling and shape of a caregiver’s arm, carry both the scent of the baby’s mother and calming aromatherapy oils. He then placed the lavender-scented pillow alongside a baby dozing off in a NICU bed.

Herbalists, chemists and massage therapists have long professed the therapeutic and healing properties of essential oils. Lavender oil, which produces the mood-balancing serotonin chemical in the brain, triggers sedative states and relaxation while chamomile oil balances out emotions. Dr. Lori Shook, a neonatologist in the NICU, wondered if the oils could help mitigate disease-related stress and anxiety in NICU babies.

Shook was familiar with veterinarians' use of lavender to calm skittish animals and, as a horse owner, had seen spooked horses respond to lavender. Knowing many of her infant patients were inundated with drugs in the early days of their lives, she wanted to integrate more non-pharmaceutical therapies to treat babies experiencing stress and medical complications related to withdrawal from drug exposure in the womb, or neonatal abstinence syndrome (NAS). Few studies conducted through rigorous scientific testing have produced evidence showing an association between aromatherapy exposure and improved health outcomes. Shook and Daniel, a pediatric fellow, set out to examine the potential to use aromatherapy to reduce stress in agitated infants.

“There is a lot of complementary alternative medicine research out there that is not subjected to rigorous scientific methodology,” Daniel said. “When we started this project, that was our goal.”

Shook and Daniel recently completed a pilot study reporting positive results from administering aromatherapy as an adjunctive treatment for babies recovering from NAS. Since launching recruitment in fall of 2015, Shook and Daniel have enrolled 40 infants admitted to the NICU with symptoms of NAS. Infants assigned to the experimental condition received an aromatherapy patch, in addition to other necessary medical interventions to facilitate recovery. The preliminary results show babies who received aromatherapy stayed in the NICU an average of 6.4 fewer days than babies who did not receive the aromatherapy treatment. The researchers found babies who received aromatherapy needed smaller doses of withdrawal maintenance medication than those who didn’t receive aromatherapy.

Shortening an NAS infant’s length of stay in the NICU helps families, but also reduces medical costs. One day of treatment in the NICU nursery costs about $5,000 for one baby. The study suggests that aromatherapy patches, at about two dollars apiece, can be implemented cost-effect measure for reducing drawn-out hospital admission for NAS treatment.

“The cost of caring for these babies is astronomical,” Shook said. “Being able to shorten their stay is a financial and social windfall for everybody.”

Shook considers aromatherapy another element in a comprehensive medical “toolbox” to facilitate recovery in babies experiencing stress from NAS or other medical complications at birth. Titrated doses of methadone and morphine are the standard pharmaceuticals for babies experiencing withdrawal. But Shook and NICU providers avoid medications as a first-line treatment, trying multiple interventions and natural therapies before prescribing maintenance medication.

“It’s easy to throw drugs at these babies. The traditional approach is a dark, quiet room and swaddling, and if that doesn’t work then you use morphine,” Daniel said. “We would prefer to not use drugs. Once they get started, it’s a long haul sometimes.”

Shook has integrated multiple non-pharmaceutical therapies and practices, such as shushing, meditation, energy flow, music therapy, occupational therapy, skin-to-skin bonding and infant massage, to decrease stress and promote recovery in NAS babies at Kentucky Children’s Hospital. Parents and families receive instruction on how to perform stress-reducing practices to soothe babies at home. Shook references both scientific and anecdotal evidence from working with new mothers to support the effectiveness of adjunctive therapies for distressed babies. She only introduces medication after many non-pharmaceutical alternatives are ruled ineffective in reducing infant stress.

Shook has proposed another study to explore whether aromatherapy alleviates stress and increases sleep hours in NICU nurses. She is also working to extend the study of aromatherapy in babies to multiple sites across Kentucky and rural satellite nurseries receiving NAS babies. Ideally, babies showing symptoms of untreated drug exposure will receive aromatherapy before the onset of withdrawal. Many babies admitted to the KCH NICU are transferred from smaller rural hospitals and already experiencing withdrawal.

Shook also thinks future research must identity the specific processes in the brain stimulated by aromatherapy, contributing to scientific evidence in favor of using aroma as a clinical therapy. Aromatherapy could be used in numerous pediatric settings to help calm children undergoing treatment. Shook would like to see the medical community embracing alternative therapies and natural remedies rather than relying only on medication to heal patients.

“There is so much opportunity here,” Shook said of researching alternative therapies. “There is a reason these things exist in folklore, and it’s because they work.”