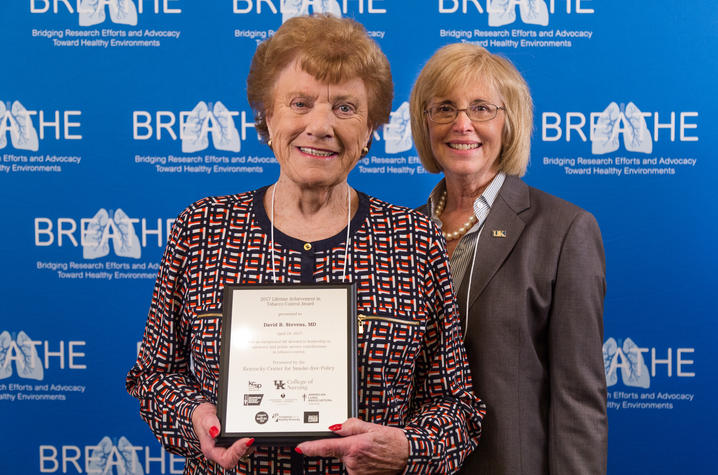 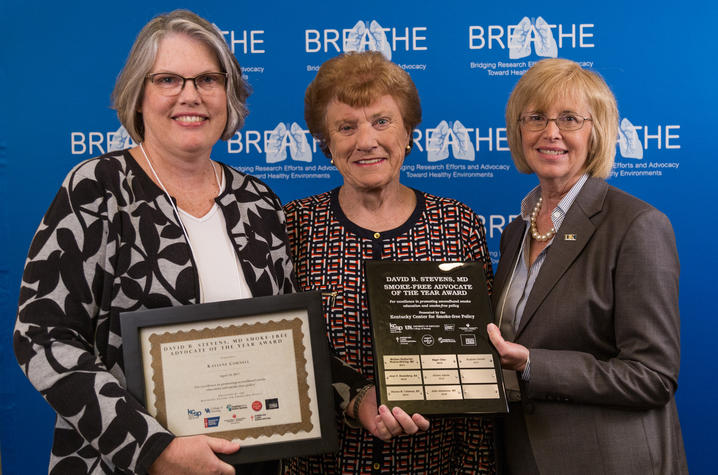 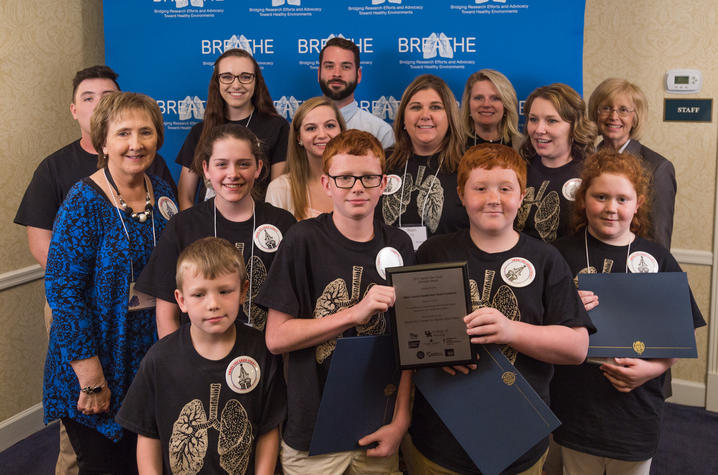 LEXINGTON, Ky. (April 21, 2017) — The Kentucky Center for Smoke-free Policy (KCSP) celebrated 10 years of partnering with communities across the Commonwealth to advocate for smoke-free policies during its annual conference, “Smoke-free Partnerships: Past. Present. Future.” on Tuesday, April 18.

A special Lifetime Achievement Award honored the legacy of Dr. David B. Stevens, a Lexington doctor and public servant who helped pass the first smoke-free ordinance in Kentucky during his tenure as a Lexington-Fayette Urban County Council member. His sister Alice Stevens accepted the posthumous honor.

Kaylene Cornell, a health advocate in the Purchase District Health Department, received the 2017 David B. Stevens, MD, Smoke-free Advocate of the Year Award. Cornell was recognized for her efforts strengthening Paducah’s smoke-free ordinance. As a health educator, she spends her time helping people to quit smoking while educating students and community members about the dangers of smoking and secondhand smoke.

In addition, Wayne Meriwether, the CEO of Twin Lakes Regional Medical Center in Leitchfield, Kentucky, was honored with the 2017 Lee T. Todd, Jr. Smoke-free Hero honor for his advocacy of a citywide smoke-free ordinance and involving rural hospitals to advocate for smoke-free policies. The Lee T. Todd, Jr. Hero Award recognizes courage, leadership, perseverance and continuous commitment to smoke- and tobacco-free environments in the face of adversity. JD Chaney, deputy executive director of the Kentucky League of Cities, received the Brian Early Mattone, Esq. 2017 Legal Counsel Smoke-free Support award for his role during Lexington’s efforts to remain smoke-free by writing a persuasive amicus brief to the Kentucky Supreme Court.

KCSP hosted Brian King, the deputy director of research translation in the Office on Smoking and Health at the Centers for Disease Control and Prevention, as the 10th anniversary keynote speaker. During his talk, “The Changing Landscape of Tobacco Product Use in the U.S.: Considerations for Public Health Policy, Planning, and Practice,” he examined changes in tobacco use policies and outlined effective approaches to tobacco control policy development. He also addressed new challenges in tobacco regulation, including emerging patterns in youth tobacco use and electronic cigarettes. King was the senior associate editor of the 2016 Surgeon General’s Report on e-cigarette use among youth and young adults.

“The theme of the 2017 conference was a celebration of 10 years of inspiring smoke-free community partnerships,” Ellen Hahn, director of the KCSP, said. “We took a look at the past and the present and empowered stakeholders to embrace a smoke-free future to make Kentucky a better place to breathe. We see lower smoking rates, improved air quality and fewer admissions to the hospital for emphysema, but only in places with comprehensive or 100-percent smoke-free workplace laws. One-third of Kentuckians are currently protected by 100-percent smoke-free workplace local laws. We’ve made progress in 10 years, but have more work to do.”

The Kentucky Center for Smoke-free Policy, housed by the UK College of Nursing, conducts research, collects data, and provides resources and strategies to assist advocates working on smoke-free campaigns across Kentucky.