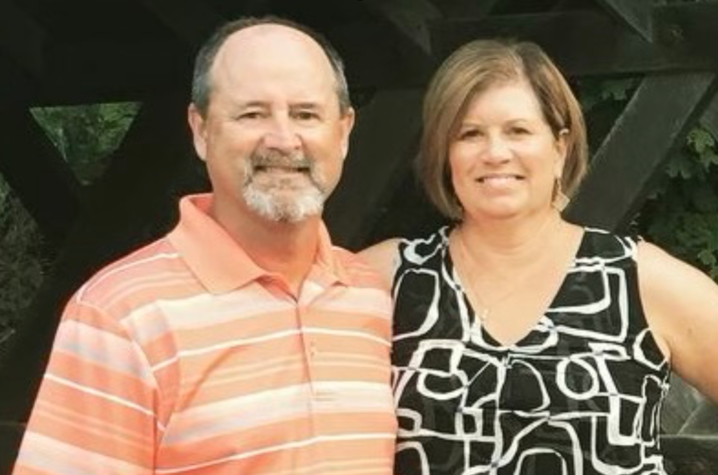 Mark was told that his wife wasn't a compatible match for a much-needed kidney transplant. A national network of hospitals facilitated an elaborate kidney exchange to save his life. (Photo courtesy of Mark and Sharon Patton)

Mark had more than his share of health problems. In 1987, at the age of 25, he was diagnosed with Wegner’s Granulomatosis, an autoimmune disease and affects the blood vessels in the entire body. Patients with this disease have a higher risk of developing bladder cancer. In 2013, Mark was diagnosed with stage-three bladder cancer and had a complete cystectomy, a procedure in which the bladder is removed.

Mark has been cancer-free for eight years, but the Wegner’s Granulomatosis took a toll on the blood vessels in his kidneys. He needed a kidney, and he needed one fast. His wife Sharon was a willing donor, but there was just one problem.

“My wife Sharon, who is very healthy, offered to donate for me,” said Mark. “The only problem was she is B positive and I am A positive, which would be an incompatible donation.”

Mark’s transplant coordinator at the UK Transplant Center, Todd Maynard, had a solution. The Transplant Center had just joined National Kidney Registry (NKR) a network of hospitals that coordinate kidney donations across the country. Sharon couldn’t donate to Mark, but there was someone in the country who could. And in turn, Sharon would have her kidney sent off to someone for whom she was a match.

The NKR is a network of 100 hospitals across the country that uses a complex matching system of kidney donors with potential recipients. The registry maintains a reference list that includes patient health information and a frozen blood sample from potential donors and recipients. If the matching algorithm indicates a potential match, each hospital is sent a sample of the frozen blood for further testing.

Mark and Sharon both underwent extensive testing prior to being placed on the registry. For Mark, it was blood work and other labs, but Sharon underwent extensive blood work, CT exam, X-ray, current skin cancer screening, colonoscopy and a physical exam with the transplant surgeon to ensure that she was healthy to donate. In March 2020, Mark and Sharon were cleared for surgery and were ready to be put on the registry.

But the COVID-19 pandemic put those plans on hold. UK HealthCare temporarily suspended all scheduled and elective procedures to preserve PPE and prepare for a surge of patients. The clock was ticking for Mark. His kidney function fell to 14%. If it fell below 10%, he would have to go on dialysis.

In June, Sharon received a call from Maynard who said scheduled procedures had resumed and that she and Mark were going to be added to the registry. Two weeks after that, Maynard called back with even better news: their surgeries were scheduled for July 9.

The NKR registry is an intricate exercise in logistics. At the time Mark and Sharon were being prepped for surgery, patients in other hospitals around the country were being prepped at the exact same time – one in New York to donate to Mark and one in Connecticut to receive from Sharon. The process of lining up these concurrent surgeries is called a “chain,” and there could be as many as 30 surgeries happening simultaneously across the country.

“On the morning of July 9, all the donors, including Mrs. Patton, go to the operating room,” Maynard explained. “The kidney is recovered and ready to go to the airport at ten in the morning. And those kidneys are put on planes flown all over the country. In this case, Mrs. Patton’s donation was completed and she was in a recovery room by the time her husband's kidney landed in Lexington. Then it’s delivered to the hospital and goes straight to Mark in the operating room.”

“Sharon had to be at UK hospital at four in the morning for surgery at 5:30 a.m.,” said Mark. “She had to be there early because her kidney was flying to Connecticut for transplant that day. I didn’t have surgery until 5:30 p.m. because my kidney was flying in from New York.”

Sharon spent three days in the hospital. Her surgeon, Dr. Meera Gupta worked with her to develop a post-surgery medication regimen to manage her pain.

“The end result was worth the pain,” Sharon said. “It lasted for a couple of weeks but got easier each day.”

Mark spent four days in the hospital. His pain was more manageable, but eight days after his transplant, he was rushed to the emergency department. A urinary tract infection spread to his bloodstream, causing life-threatening sepsis. After two weeks of an antibiotic IV administered by Sharon at home, Mark was out of the woods.

“I finally was on the road to better health and have been doing great ever since,” said Mark. “We both can’t say enough good things about UK and the care we received. Everyone was attentive to our needs and the care was exceptional. We want to give a big shout out to Todd, Sharon’s transplant coordinator. He was there every step of the way and kept us informed.”

For information on how to become a living kidney donor, visit the UK Transplant Center to find out how you can give the gift of life.