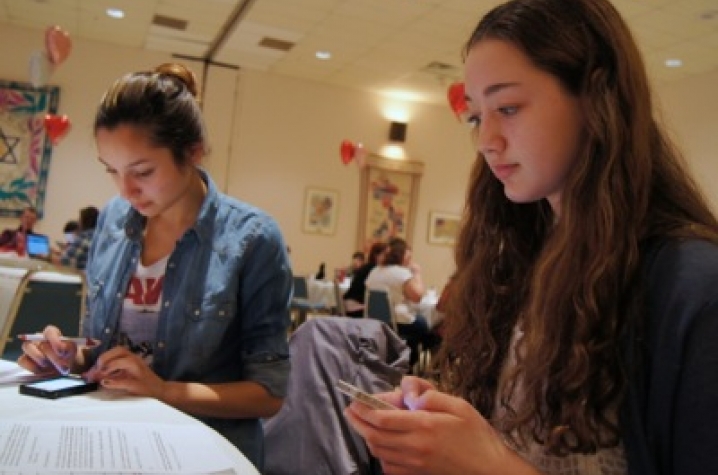 LEXINGTON, Ky. (Feb. 11, 2014) - Kentucky teens will exchange cards, flowers and chocolates with their sweethearts this week in a display of Valentine's Day bliss. But a staggering number of Kentucky's youth aren't feeling loved or appreciated - and many are dealing with thoughts of suicide.

During the annual Spread the Love-a-Thon suicide prevention event held on Feb. 9, local high school students sparked dialogue about youth suicide and mental health using tablets, cellphones and laptops. A group of about 20 students spent a couple hours at the Temple Adath Israel in Lexington sending out "Lifelines," or messages that contain at least two compliments and statistics about suicide in Kentucky, to friends and relatives. The event was sponsored by the University of Kentucky Division of Adolescent Medicine and affiliated nonprofit Stop Youth Suicide.

Henry Clay High School junior Henna Khan and her sister Zaynab, a freshman, checked off names on a list of friends they hoped to encourage through texts and social media messages during the Love-a-Thon. Henna was using the social media platform Instagram to send out many of her encouraging messages.

"A lot of girls have problems with the way they look," Henna said. "I'm trying to tell them that they are beautiful. It's a real confidence booster."

Dr. Hatim Omar, chief of UK's Division of Adolescent Medicine, believes positive messages are powerful tools to fight suicide in the teenage population. Whereas adults can take months or even years contemplating suicide, teenagers have more compulsive suicidal behaviors. Thirty percent of teens who commit suicide had no mental illness. Omar said this is why genuine encouragement and kindness has the ability to intervene when a teen has the idea of suicide.

"Basically teens kill themselves when they feel they are useless," said Omar. "So if you give them the feeling that they are better than that, many times it's a life-changer."

Omar reminds students that encouraging words must be genuine to have an effect on their peers. He also pleads with parents and mentoring adults to spend time with their teens and create a safe environment their kids to speak openly without the expectation of punishment.

Leslie Aslam, a medical student at UK who organized the Love-a-Thon, said in addition to starting conversations about suicide in Kentucky's teenage population, the high schoolers who participate leave with a good feeling.

"They are very surprised at how good it made them feel to make other people's days," Aslam said. "They expected other people to feel good, but they didn't expect it to happen to them."