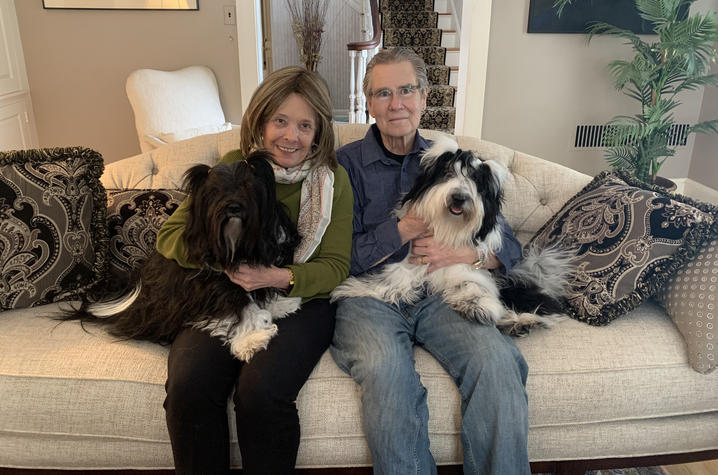 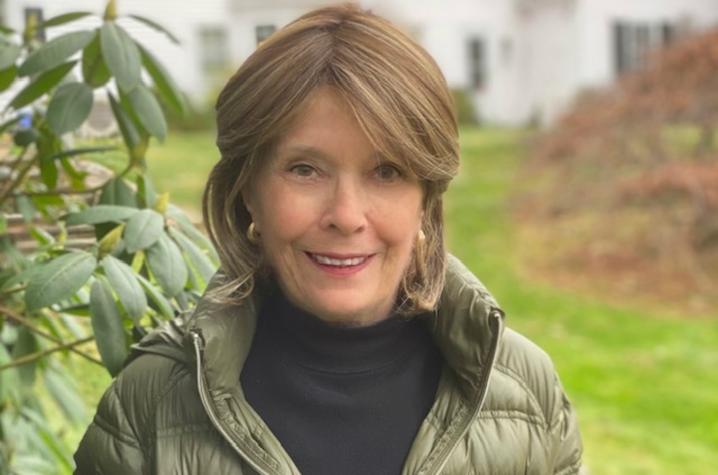 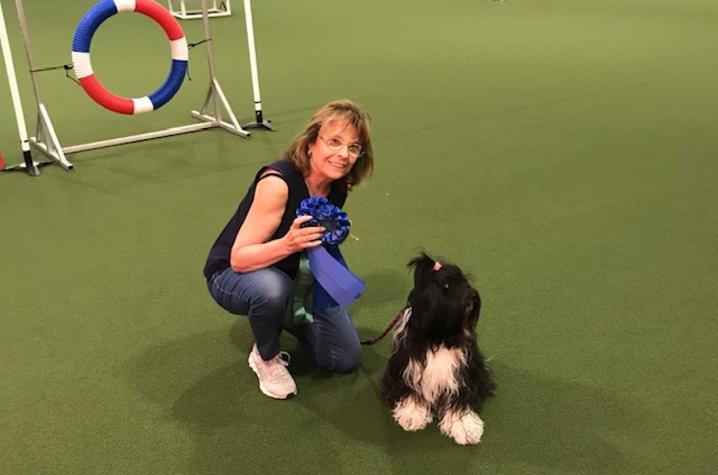 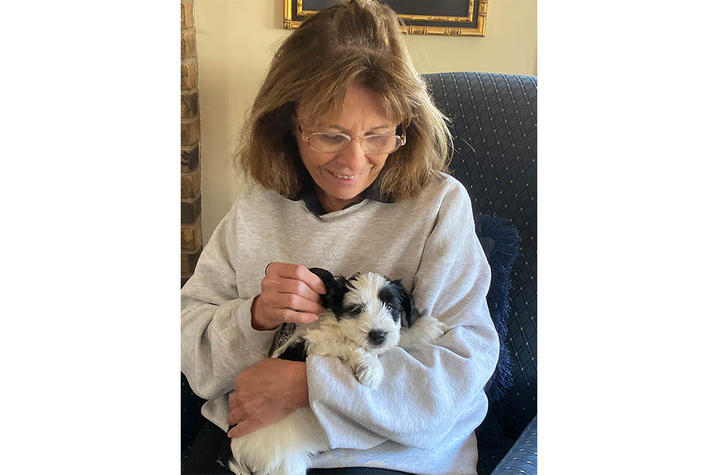 LEXINGTON, Ky. (Feb. 9, 2021) — For Massachusetts resident Sherry Irwin, an unexpected bout of breathlessness was the first inkling that something was amiss. A retired primary care physician, she was doing file reviews for the Social Security Disability Insurance program and always liked to park her car at the top of the hill two blocks from her office in order to sneak in a little extra exercise. In late May 2020, she suddenly had to stop and rest halfway through her uphill trek.

“It was very weird,” she said. “I thought, ‘Why am I so out of shape all of a sudden when I can usually do this hill?’”

When she developed abdominal pain a few days later, she treated it as an ulcer, hoping for the best. But when the pain didn’t abate, she did what any doctor would do: perform an evaluation.

“I examined myself,” she said. “And I found a mass in my right upper quadrant.”

Due to COVID-19 restrictions, Irwin says her options were limited. Her primary care provider suggested scheduling an ultrasound, but Irwin knew she didn’t have time to wait. She drove to nearby Connecticut, where she checked herself into the emergency room. After getting an ultrasound, she was sent immediately for a CT scan and got her initial diagnosis: peritoneal carcinomatosis.

The peritoneum is a thin membrane of tissue that surrounds the abdominal organs. Peritoneal carcinomatosis is a rare form of cancer that usually develops on this tissue after other abdominal tumors have begun to spread. Irwin’s abdomen was filled with cancerous growths that surrounded her other organs. Her right kidney had become hydronephrotic – swollen with urine – due to obstruction from the tumors.

“I was totally in a state of shock,” she said. “They told me I would live maybe two weeks to four months maximum.”

After receiving a stent to relieve the pressure on her kidney, Irwin was discharged and given two choices: chemotherapy, which wouldn’t be enough to kill the disease, or hospice care. Though she asked about surgical options for treatment, she was told there were none available.

Irwin and her husband, Richard – also a retired physician – were devastated. She began getting her affairs in order for her grown son and daughter. Her son, a news producer, wasn’t able to come stay with her due to the in-person demands of his job. But her daughter, a marketing data specialist, was working remotely and was able to move back in with her.

“I went home and basically went to bed for three or four days, just thinking about dying,” she said. “I took out all my jewelry and gave it to my daughter, showed her everything she would get, told her where everything was.”

A few nights later, Irwin pulled herself out of bed, determined not to give up just yet. As a physician, she had spent years advocating for patients and friends, encouraging them to seek second opinions and do research for themselves. Now finding herself on the opposite side of the coin, she did what any patient would do: perform a Google search.

When she found results for a procedure known as CRS/HIPEC – cytoreductive surgery followed by hyperthermic intraperitoneal chemotherapy – she perked up. Her physicians hadn’t mentioned it as a possibility, and she hadn’t heard of the treatment before. During this procedure, two catheters are placed in the abdomen to create a circuit with a machine designed to heat the chemotherapy in the abdomen to 103 degrees. One catheter pumps the heated chemotherapy into the abdominal cavity, while the second catheter brings it back into the machine. This circuit can run anywhere from 30 to 90 minutes, depending on the type of chemotherapy used.

She found a video of University of Kentucky Markey Cancer Center surgical oncologist Dr. Joseph Kim talking about his extensive experience with the procedure, along with testimonials from several of his patients. After researching HIPEC at several other major medical centers and reading up on the history of the procedure, she eagerly presented her findings to her husband.

“I had two pages of notes,” she said. “When my husband got up in the morning, around 5 a.m., I said, ‘There’s a treatment. We didn’t know there was a surgical treatment.’”

Because of the COVID-19 pandemic, Irwin sought out a qualified surgeon who was within a reasonable day’s drive from Massachusetts. She reached out to a half-dozen medical centers in the eastern half of the U.S. who offered HIPEC as a treatment option. The reception she received wasn’t encouraging – the oncologists either rejected her case outright or told her it wasn’t likely to be successful.

Kim, who has been performing the HIPEC procedure for 19 years, was actually the first to respond, setting up a call with her the very next day. He asked Irwin to overnight her imaging studies, and after reviewing her case, he gave her some good news.

Kim’s diagnosis also differed from the opinions of the other surgeons that Irwin consulted. Despite the fact that she had always had clean colonoscopies and there was no sign of colorectal cancer at the time of diagnosis, her first oncologists thought that’s where her cancer had started, but then had simply “burned out.” Kim, however, suspected her primary disease was actually appendix cancer that had spread to the peritoneum, due to the presence of mucin in her abdominal cavity.

Her disease had also spread in a way not typical of appendiceal cancers. In most patients, the cancer spreads in the front part of the body, often leading to a noticeably bloated appearance. In Irwin’s case,her cancer spread down the back of the body, entangling her ureter, which led to the stress on her right kidney.

Because of this unique presentation, Kim says, it can be easy for a surgeon with less experience to overlook.

“Appendix cancer is kind of an odd bird, a strange disease,” Kim said. “We typically don’t talk about it much in medical school or training, because it’s so rare. But just because of what I do, I’ve seen so many patients with appendiceal cancer.”

Most patients who undergo HIPEC with Kim will “bookend” their procedure with three months of intravenous chemotherapy. The first prescription of IV chemotherapy is meant to prevent the cancer from spreading via the bloodstream and will ideally reduce the tumor mass, making it easier for Kim and his team to go in for surgery. Afterward, the IV chemo is used again to kill any microscopic traces of cancer that might have lurked behind.

“Intravenous chemotherapy doesn’t penetrate cancers in the peritoneal cavity very well, because there aren’t distinct blood vessels that take the chemo to those tumors,” Kim said. “So back in the 70s and 80s, the HIPEC procedure was developed for that specific scenario where you have cancers developing in the peritoneal cavity… we cut out all the tumors that we can see, but then hot chemotherapy bathes all the abdominal surfaces to kill the microscopic disease that you can’t see with your eyes.”

Irwin began her first round of IV chemotherapy in July, completing five treatments close to home. The chemo reduced her cancerous masses by 70%, putting her in an even better position for a successful surgery.

Irwin, her husband and daughter, and her two Tibetan terriers loaded up their car and made a 14-hour trek to Lexington. On Oct. 13 – her 71st birthday – she underwent surgery and HIPEC at Markey. During the eight-hour procedure, Kim removed her appendix, right colon, part of the ureter, and other sites of disease before finishing with HIPEC. Afterward, Irwin spent 10 days in the hospital and remained in Lexington for another few weeks before getting the green light to return home – just in time for Thanksgiving.

Back in Massachusetts, Irwin is finishing up her post-HIPEC chemotherapy. She is currently considered NED – no evidence of disease – but she will be scanned regularly to look for any signs of recurrence. She’s looking forward to getting her COVID-19 vaccine and returning to her favorite hobbies: gardening, traveling, dining out and going to the movies. She’s also eager to return to showing and running agility with her dogs: Lucy, an AKC Bronze Grand Champion, and 11-month-old Toby, who has just begun working in the show ring.

She has also concluded that maybe it’s time to fully retire. “I’ve decided that life is too short,” she said.

Now eight months after her initial diagnosis – four months longer than she was told to expect to survive – Irwin says she’s thankful to have found a physician who was in her corner.

“My advice is that you have to find someone who you connect with, and [Dr. Kim] connected with me,” Irwin said. “He respected that I was a physician and he didn’t talk down to me. And my husband liked him! We both felt like we could trust this person with my life.”