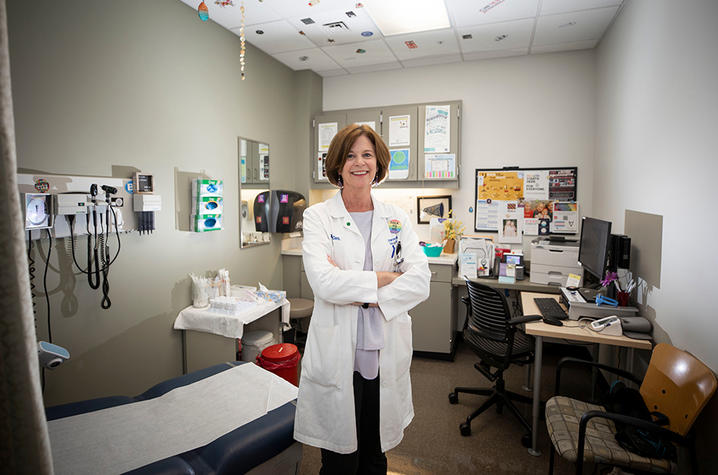 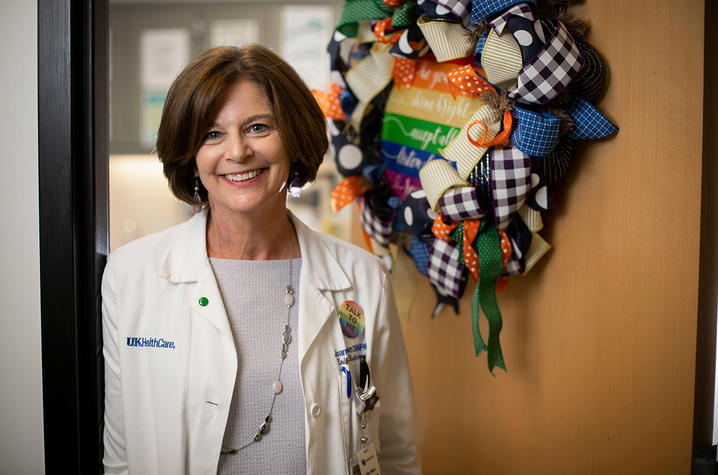 LEXINGTON, Ky. (Nov. 15, 2019) — Students face challenges today that generations before them couldn’t even dream of. From using technology in the classroom to the pressures they feel from social media, the college experience today is monumentally different than it used to be.

Students come to college to express themselves in a way that they may have always wanted to, but never thought they could. With open hearts and minds, they leave their routine they’ve always known, ready to find themselves – whatever that means to them.

Today, more and more teens are identifying as transgender or gender nonconforming. Some students say they feel unwelcome even before they set foot on a college campus. Joanne Brown, a nurse practitioner at University Health Service (UHS), is making it her mission to support students through their transitions.

Brown is a provider who never stops learning. She often attends conferences and informational events about student health to learn how to better care for patients. Shortly after starting at UK, she attended a meeting where some medical students were sharing experiences they’ve had in the health care system, and it inspired her.

“One of the students who identified as lesbian said their provider had just assumed they were sexually active with a male partner and asked, ‘What are you doing for birth control? Aren’t you afraid of getting pregnant?’ And I went, ‘Oh ouch, I’ve done that before. And I can do better,’” said Brown.

So she started to do better. She reached out to other providers for guidance and advice. She began cultivating a more inclusive environment by speaking to patients differently and replacing outdated signage in her exam room. But it didn’t seem to be enough.

She had a new patient, a graduate student from Washington, D.C., come see her.

“They’d been to four providers before they came to see me,” said Brown. “Four other providers in Lexington, and couldn’t get anybody to prescribe PrEP.  Which is absurd, because PrEP is so effective in preventing HIV infection. So I figured things out. I looked at the guidelines, and I wrote that prescription.”

From then on, Brown was determined to put LGBTQ* health at the forefront of her career. In 2016, a task force of UK HealthCare providers and individuals from campus organizations came together and created the UK HealthCare Transform Health Clinic.

Transform Health was created with the goal of providing and improving care for the LGBTQ* population. It also trains health sciences students and residents in LGBTQ* health best practices and offers mental health counseling support. The group consists of providers from several different UK HealthCare institutions, including UHS, Family and Community Medicine and the Counseling Center.

The original task force that created Transform Health wanted to bring attention to one particular marginalized population – people who identify as LGBTQ*. Brown said starting there helped her realize there are many other populations that need attention in health care too.

This understanding led to the establishment of the UHS Inclusive Care Committee. This group meets to improve care for all populations of students – first-generation, students of color, veterans, international students and several other marginalized groups.

“The intersectionality of a patient’s identity has such a large impact on their overall health,” said Brown. “I’m hopeful that this understanding helps us take better care of all our patients, not just LGBTQ* students.”

Brown considers herself lucky to work in student health, especially at UK. Dr. Ann Hays, a provider and clinical director at UHS, played an influential role in Brown’s push for better LGBTQ* care.

Student health also appealed to Brown because of how it allows her to put her patients first in every way. Students don’t have a co-pay for every appointment, so if Brown wants to see them sooner than normal for a follow-up, there’s no hesitation.

Brown said she’s often been inspired by her patients. For a lot of students, going to see Brown is the first step of becoming who they’ve always wanted to be.

“I think it’s taken everything they have to walk through our door and talk to me for the first time,” said Brown. “They’re afraid this step is going to alienate them from their families of origin. It might mean those families withhold financial support, they can’t continue in school, that they lose a relationship with somebody.”

Jace Peters-White, a UK student and patient of Brown’s, is an exemplary model for what the right kind of care can do. They have been seeing Joanne since their first semester here in 2017.

“I’ve never had any doubts or worries being here at UK,” said Peters-White. “The campus is such a welcoming and affirming place to be my true self.”

White had already been receiving hormone therapy before coming to UK. They feel lucky to have Brown here to continue their care.

“It’s so difficult to find affirming transgender health care anywhere; I used to travel two hours to go to an office that had the expertise in the type of care I needed,” said Peters-White. “Having Joanne as a resource this close to me is a complete blessing.”

Brown is proud to be a representative of this university and what we do for our LGBTQ* students. However, she says there’s much more to be done, like including LGBTQ*-centered health in more of the curricula here. In the future, she wants UK to be known as “the place to go,” for inclusive care.

As Brown continues to advocate for her patients, she also celebrates with them.

“The most rewarding thing is when I see my patients out in public, particularly after they’ve been on hormones for a while – they’re happy, they’re smiling, they’re whole,” said Brown. “The exciting thing is they’re graduating with their undergraduate degrees. They’re completing graduate programs. They’re becoming.”