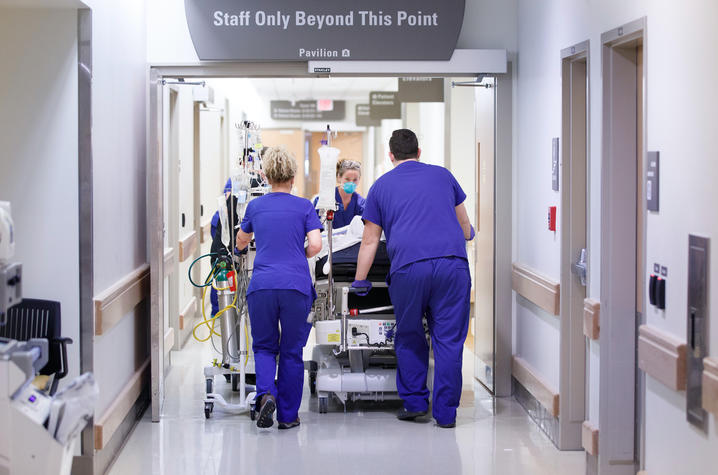 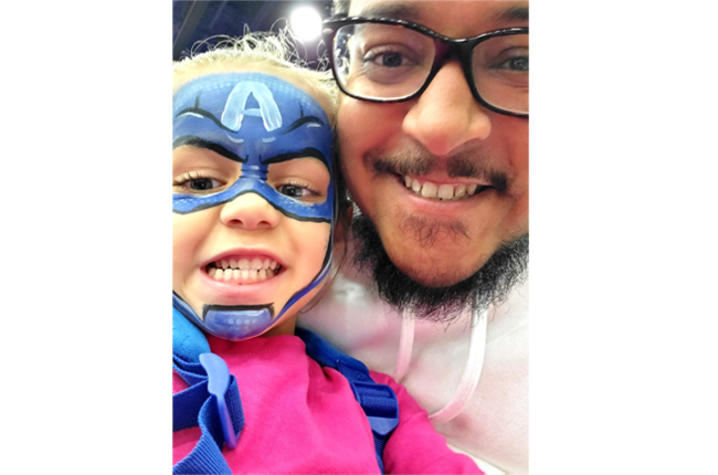 You generally hear this phrase used to describe raising children. UK HealthCare surgeon Dr. Rajasekhar Malyala uses it to describe saving a patient from COVID-19. “It is hands-on, intensive care,” he said. “It is a labor of love, especially on the part of the nursing and respiratory staff who are putting their lives at risk doing this.”

Treating a COVID-19 patient is particularly risky when they require advanced support, like a ventilator or, in dire cases, extracorporeal membrane oxygenation (ECMO).

Demetrius Booker, 40, of La Grange, Kentucky, was one of those dire cases. He was transferred to UK Chandler Hospital in July after contracting COVID-19. “Demetrius came to us on very advanced life support,” Malyala said. “He was on a ventilator with a breathing tube and was heavily sedated. He was not conscious or aware of what was happening to him.”

Booker remembers waking up in a chilly hospital room. “I was like, man, where am I? Why is it so cold? Why can I not talk,” he recalls. “Finally, the nurse came in and asked if I knew what month it was.”

He responded, “July.” It was September.

“I remember the nurse saying, ‘you have been through a lot,’” Booker said.

When his symptoms first started back in July, Booker felt fatigued and short of breath. At the time, he chalked it up to allergies – he has a minor case of asthma and had just recently cut the grass. A few days later though, the fever set in and his taste was off. “That is when I thought I should go to urgent care,” Booker said.

As he awaited results of a COVID test, Booker recalls that he could not shake a fever, so after a few more days, he felt a visit to his local emergency room was in order. “They gave me another COVID test when I got there but even before the results were available, the nurse said she knew I had it,” he said. “I was in shock.”

Over the course of his illness, Booker was treated at several hospitals, though he does not remember anything past his initial check-in at the emergency room in La Grange. Eventually, he was transferred to Baptist Health Louisville, where doctors decided to put him on ECMO. Booker was then taken to UK Chandler Hospital in Lexington for long-term care.

“It is a chain link of survival,” Dr. Malyala said. “It takes the pulmonologist, the Baptist Health doctors who placed Demetrius on ECMO and the team at UKHC all working together to help him survive.”

Booker was heavily sedated when he arrived at UK Chandler Hospital. Malyala, an assistant professor of surgery, specializing in ECMO, LVAD and heart transplant, said Booker could not move or breathe on his own.

“Demetrius was taken directly to the intensive care unit (ICU) that specializes in COVID-19 patients,” Malyala said. “He was one of the youngest patients we have seen who have required extreme intervention.”

ECMO, or extracorporeal membrane oxygenation, is a highly specialized treatment that uses a catheter to remove blood from the body, transport the blood to a pump to circulate blood through an artificial lung back into the bloodstream of a critically ill person. The system provides heart-lung bypass support outside of the person’s body.

In addition to ECMO, Malyala and a team of UKHC doctors felt it would be best to try moving Booker’s body into the prone position. More than a dozen doctors and nurses worked to flip Booker over from his back to his stomach.

“As you might imagine, doing that without pulling out lines and tubes is very labor intensive,” Malyala said. “We had between 10 and 15 people in the room at the same time to flip him over so that we did not dislodge any of those attachments.”

One wrong move and Booker could die.

Malyala hoped this treatment would buy time by allowing Booker’s lungs to rest and, hopefully, recover. Eventually, he turned the corner and, after 31 days, Booker was able to come off of ECMO.

Malyala said only about half of the people who go on ECMO survive. Luckily, Booker is young and was able to withstand the treatment.

“We are at war against an invisible enemy,” Malyala said. “We have to do our part to save lives and sometimes, our fight does make a difference. When you do have success stories like Demetrius, it is a boost of morale for everyone.”

Booker who is now back at his home still has a long road to recovery. He needs physical therapy to help build his body back to full strength.

“This journey has been an emotional rollercoaster,” Booker said. “There were many times that I cried, but I kept my mind on my four-year-old daughter. I wanted to make it back to her.”