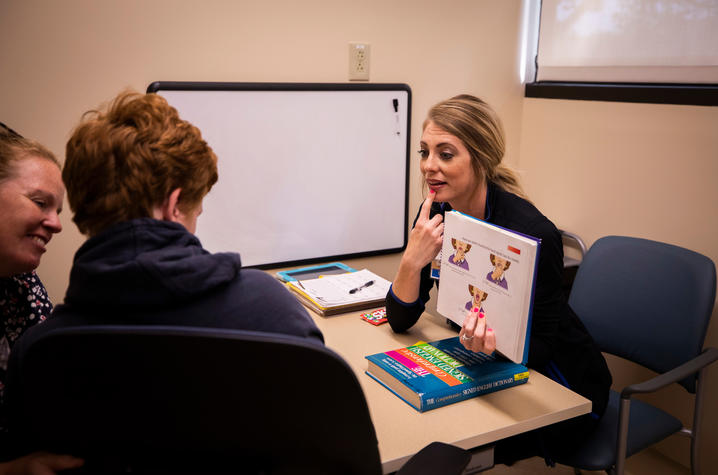 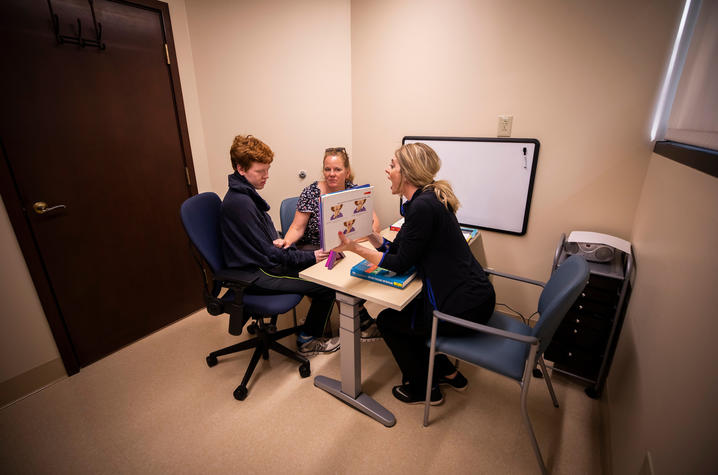 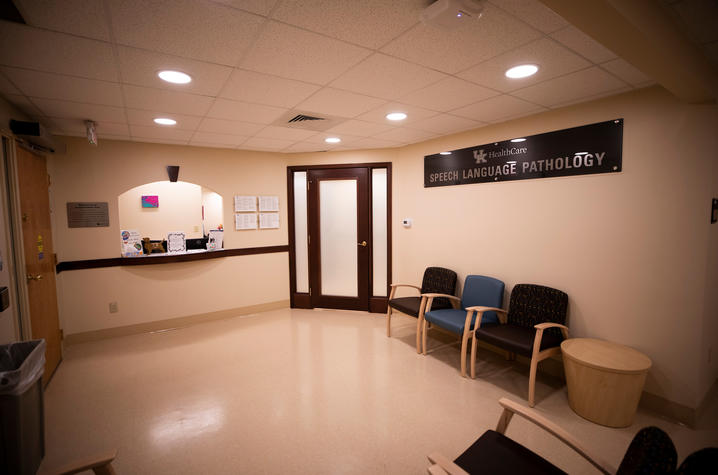 LEXINGTON, Ky. (May 31, 2019) — The ability to express thoughts and ideas through voice, speech and language is easy to take for granted. However, for individuals living with communication disorders, speech-language pathologists (SLPs) play an essential role in learning to convey and understand meanings within these functions.

As SLPs work to assess, diagnose and treat conditions that hinder social and cognitive interaction, they often play a life-altering role in the life of their patients. The family of Gray McClanahan, an 18-year-old living with autism spectrum disorder, have observed firsthand how the patience and persistence of Corie Sexton, a member of the team at UK HealthCare’s Speech-Language Pathology Clinic, has led to monumental improvements.

Gray, who is nonverbal, has participated in various speech therapy programs since he was just 2 years old. For the first decade of his life his communication was severely limited. Loralyn Cecil, Gray’s mother, recounts that at times he was able to communicate by pointing to a picture or nodding his head, but his responses were typically inconsistent and inaccurate.

Throughout the years Gray worked on learning sign language with several teachers and therapists, but he had trouble retaining the information he learned.

“He would learn two signs – for example, “done” and “eat,” then learn a third, but suddenly his use and understanding of one of the original two would just disappear,” said Cecil.

In 2014, Gray began his journey with the SLP Clinic at UK. At the time, his vocalizations were limited to screaming or yelling, and he primarily communicated through behaviors like running away, removing his clothes and hitting himself.

Sexton then conducted months of assessment to determine how Gray would best benefit from therapy. As Cecil puts it, this was the beginning of his transformation.

“She started from the simplest point and integrated other therapies," she said. "I remember, for example, she brought a metronome to teach him to keep rhythm and help him develop more control over his physical self.”

Sexton also attempted using other tools to improve Gray’s communication abilities. iPad demonstrations, picture cards and even single message communicators (a device allowing the user to convey a single preset message by pushing a button) were used in therapy.

In the months it took to find what methods worked best for Gray, Sexton also worked with him to build a sense of rapport and trust, a critical element of her job that allowed Gray to become more comfortable learning from a stranger.

Around 2016, Sexton began to observe some unique abilities in Gray: his propensity to learn and retain gestures was an undeniable strength. Their focus shifted to developing a system of sign language and modified gestures unique to Gray. By pairing signs and gestures with verbal language, he learned to make meaningful connections and eventually imitate what he was seeing and hearing.

“The consistency of her efforts is extraordinary,” said Cecil. “She pays close attention to what is and is not working for him and it makes all the difference.”

Gray now knows numerous signs — from “McDonald’s” to “drive” — and he’s starting to pair more sounds with words. Seeing his own progress, and how his communication with others is two-sided, has been one of his biggest motivators. Each week in therapy he shows new strengths, and the behaviors he used to communicate with have significantly decreased.

Today, Gray may not be able to communicate with words and full sentences, but he’s able to utilize his own system to do things like order food at his favorite restaurants and request which store he wants to go shopping at. Cecil recalls one particularly special interaction she had with her son on a recent shopping trip.

“We were going somewhere, probably to Kroger," she said. "He learned toward me, shook his head “no” emphatically, then showed me the sign for where he wanted to go instead. He argued with me. It was a first and it was pretty triumphant for him as a teenager. I’m so grateful for Corie and the UK Speech-Language Pathology Clinic.”

Throughout Sexton’s past eight years working in speech-language pathology, moments like these stand out as a reminder of why she loves her work as an SLP. In her own words, each day brings new challenges, but each day also brings new successes. Over the years, Sexton has worked in public schools, private practice and in acute care, but her home in UK HealthCare is like no other. The encouragement and support that the SLP Clinic’s team provide one another contributes greatly to patient success stories like Gray’s.

May is Better Speech and Hearing Month, and an important time to recognize the field of Speech-Language Pathology. Communication is essential to life and is a common thread among all individuals in our world. We must understand that not everyone has the ability to communicate like a typical human being should. However, with the help of speech-language pathologists, and the acknowledgement and acceptance of individuals who may be different than us, we are able to communicate profound messages with one another and help change the world. For more info on Better Speech and Hearing Month, click here.