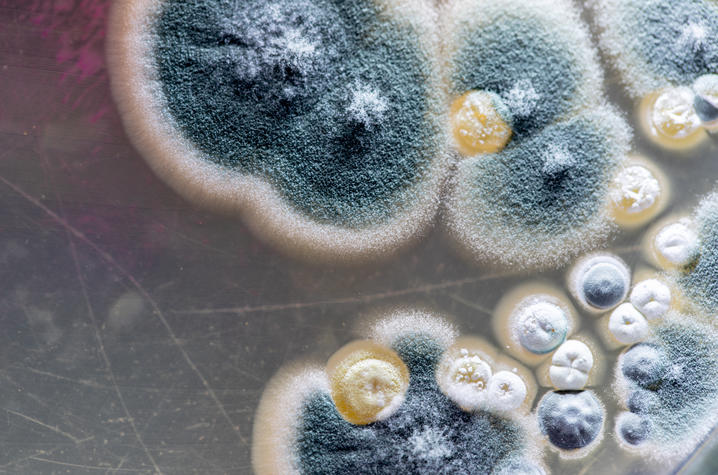 Mold on a culture plate. Sinhyu, iStock / Getty Images Plus

LEXINGTON, Ky. (Dec. 23, 2021) — In 2011, a devastating tornado destroyed much of Joplin, Missouri, killing over 150 people and causing billions of dollars in damage. In subsequent days, local doctors and the Centers for Disease Control and Prevention (CDC) reported and investigated several unusual infections in injured survivors. A soil-based mold was found to be the culprit, infecting patients through contamination of wounds suffered during the storm and causing a disease known as mucormycosis. Thirteen patients suffered wound infections, 10 required admission to the intensive care unit, and five died.

Infections after disasters are not new. Tornadoes send debris and soil airborne, floods can allow mold to contaminate homes, and earthquakes can aerosolize microorganisms living beneath the Earth’s surface. After any natural disaster, epidemiologists and public health officials play a game of watchful waiting, looking for any signs of post-disaster outbreaks.

On Dec. 10, 2021, Western Kentucky suffered one of the worst tornado disasters on record. Our state, the nation, and world were moved to tears hearing stories of loss and heroism. Dozens lost their lives, more were injured, and the damage will take years to repair.

In the aftermath, survivors must be diligent in watching for signs of infection.

After natural disasters, the most common infections involve the lungs (called respiratory infections) and the skin and surrounding soft tissue (called cutaneous infections). Lung infections arise from inhaling aerosolized organisms. Soft-tissue infections occur either from injuries with contaminated debris or from organisms that infect open wounds after the initial injury. The timeline can vary dramatically, from a few days to weeks after the initial event.

Survivors who suffered lacerations or fractures should take special care to keep those wounds clean while they heal. They should regularly inspect the wound for signs of infection, which can include redness, warmth or pus. Fever can be another sign of serious infection. If any of these are present, the patient should seek medical care.

Lung infections can be caused by breathing in large amounts of organisms typically found in the soil. The risk of disease is correlated with the number of organisms one breathes in, so the most significant threat is in those victims directly affected by the tornado. Anyone experiencing a new cough, shortness of breath, wheezing, or fever should report those symptoms to their health care provider.

It is also essential to put these risks in perspective. In most circumstances, the number of people affected by post-disaster infections is small compared to those affected by the disaster itself. In Joplin, only 13 infections were confirmed. We hope there are none in Western Kentucky, but we also know early detection and treatment are the keys to success if those infections occur. The best chance we have to achieve those goals is for everyone involved to be informed.