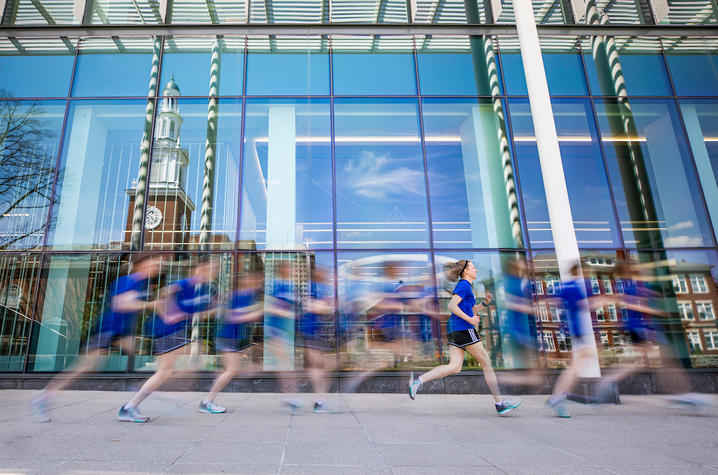 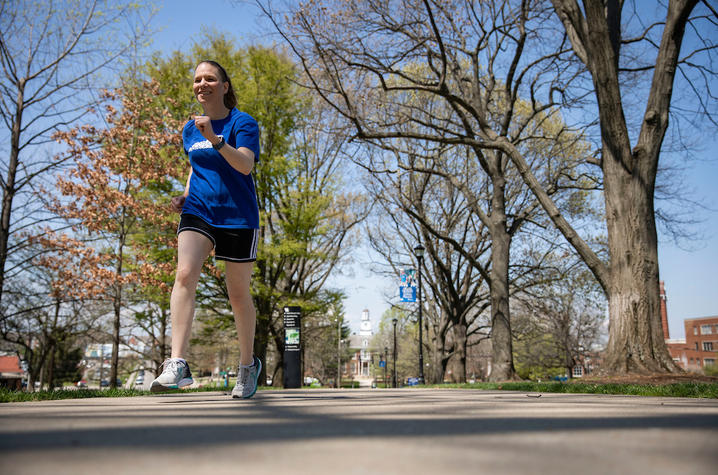 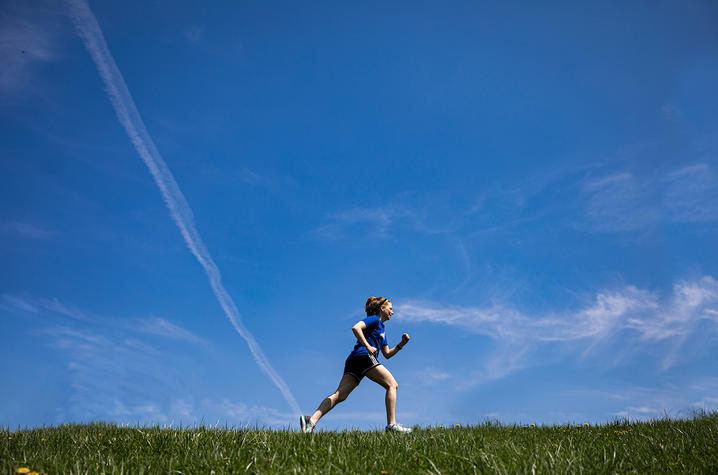 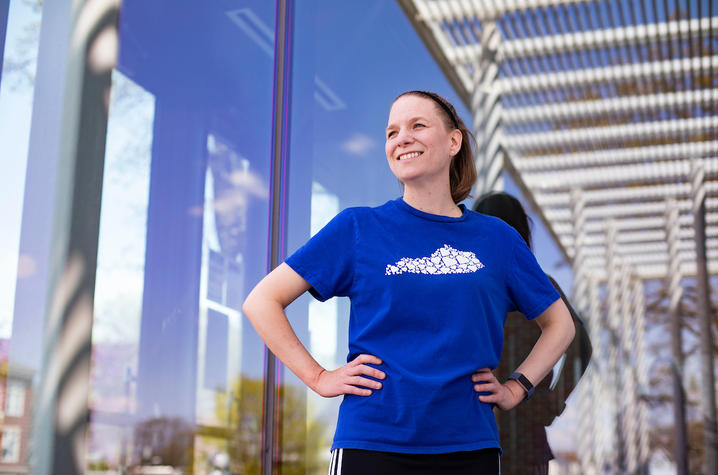 “I think it runs in my blood,” Thompson said. “My mom taught high school math and AP statistics, so math was a natural progression when I started thinking about college and what field I wanted to pursue.”

Now an associate professor in the University of Kentucky’s Dr. Bing Zhang Department of Statistics, she had actually visited the University of Kentucky during her spring break at 16 years old to meet with Arny Stromberg, Ph.D., the Allen-Anderson Endowed Professor of Statistics, who was then an associate professor in the department.

“Dr. Stromberg is one of my greatest mentors,” she said. “He was so thoughtful during that trip to sit down and talk with me and my mom for at least an hour, which helped me narrow my focus to math and science as a career.”

Thompson said she ultimately landed on statistics because she saw it as a way to help people. Ten years later, Stromberg hired her as a faculty member.

“With stats, you are working in a field where you can connect to all different areas,” she said. “As data types change and data sizes grow, we can work to gain more information for our collaborators based on their particular data types and research questions.”

As an associate professor, Thompson and her students focus on developing new statistical methods to better address challenges of particular data types.

“I love teaching students about not only statistical methods, but also how these methods can be used to help collaborators from other fields, like medicine,” she said. “Our work is an important piece of a larger puzzle that can help to predict significant outcomes.”

Thompson would soon discover just how significant of a role her research would play in her personal life.

In early 2020, Thompson found herself in the emergency department at the UK Albert B. Chandler Hospital with a staggeringly high fever and tightness in her chest. At the time, her primary care physician thought she had COVID-19.

“My temperature spiked to 104/105 degrees and the tightness in my chest was something I had never experienced before,” Thompson said.

Compared to most, Thompson is a very healthy individual. She eats right, exercises frequently and does not have any history of serious illness. During her free time, Thompson is an avid runner. At 33, she worked out at least four times a week, playing soccer and running with local groups. She has finished four half-marathons and ran her fastest half marathon time in November 2019, just a couple of months before this whole ordeal began.

“Doctors ran virus panels, took chest x-rays, blood cultures – you name it, I probably had the test done,” she said. “All of them came back negative, including a COVID test, so we were back to square one.”

Doctors needed to figure out what was causing Thompson’s immune system to respond so strongly – and fast.

The first clue came from a comprehensive blood culture. Thompson had bacteria in her blood, which meant her body was fighting off an infection. But where was the infection coming from? She remembers undergoing a number of scans all over her body, including her teeth, chest and abdomen. In the end, an echocardiogram was the key to finding answers.

Thompson had an infection in her heart – and a pretty significant one. Known as infective endocarditis, this disease occurs when bacteria enter the bloodstream, often through a cut in the skin or mouth, or from the intestinal or urinary tracts. Infective endocarditis can attack the heart valves or endocardium and if left untreated, it can lead to other serious health problems or even death.

She was referred to Dr. Hassan Reda, a cardiothoracic surgeon at the UK HealthCare Gill Heart & Vascular Institute. When she received her diagnosis, Thompson felt a ping of familiarity.

“When doctors were first describing infective endocarditis, it sounded familiar.”

Then, it dawned on her. Over the past several years, Thompson has worked collaboratively on grants focusing on opioid use disorder. Her role was to analyze data to determine if it was possible to predict infections early in people with substance use disorder.

And the type of infection included in her research?

But Thompson did not have time to dwell. Her surgery was urgent because the infection was so extensive.

Infective endocarditis can cause a wide range of complications, and the disease can either develop slowly or fast. It can be treated, depending on how quickly the infection spreads and how quickly a patient seeks medical care.

If an infection is not treated or if the patient’s body does not respond to initial treatment, the disease can be deadly. In Thompson’s case, the infection developed slowly, but it was imperative that doctors act fast before her condition worsened.

“Infective endocarditis can be life-threatening, and Katherine’s case was one of the worst I have ever seen,” Reda said. “Katherine’s infection spread to her heart valves and required extensive reconstruction surgery inside her heart. We had to change two of her heart valves.”

Bicuspid aortic valve is the most common congenital heart defect – a problem with the heart that is present at birth. However, a child with this condition, like Thompson, may not experience symptoms or receive a diagnosis until adulthood.

Thompson spent 21 days at UK Chandler Hospital. From the time she was admitted until she was discharged, she noticed the tremendous teamwork from doctors across specialties at UK HealthCare. She knows they worked diligently on her case to determine where the infection was and how to treat it.

Though doctors may never know how it got into her blood, they do know that the infection did not stop at her heart. Thompson learned that she also suffered a mini-stroke, which was a complete shock to her.

“After we knew that the infection had gotten into my brain and behind my eyes, I saw a neurologist, an ophthalmologist and an infectious disease doctor,” she said. “At one point, my mom counted 15 doctors from different areas in and out of my room. I was super impressed with how much they communicated with each other and worked collaboratively to determine how to move forward.”

Thompson became close with Reda throughout her entire ordeal. She said their shared interests helped to put her at ease. Reda majored in math during his undergraduate career, and it just so happens that he and Thompson share a birthday.

“We bonded over our birthday instantly,” Thompson said. “But what stood out to me the most was the fact that he understood how my mathematical brain works – that I needed to be able to focus on tangible tasks before and after surgery to keep from freaking out. That was immensely helpful.”

She also appreciated his patience and kindness during a very complex situation. “I am pretty sure he explained the surgery to me and my family at least four times,” she said.

Doctors estimate that Thompson was likely sick for several months before she landed in the UK Chandler Emergency Department – during which time she was playing soccer and running several miles without even realizing that anything was wrong.

“Maybe it was from a food poisoning sickness that I had in December,” she said. “Maybe from a skinned knee that I got during a soccer game – who knows. Somehow, it got into my bloodstream and made its way to my heart,” she said.

Today, Thompson is in Phase 3 of cardiac rehab with intensive outpatient therapy. She is slowly, but surely, hitting the pavement again to build back her stamina. She takes frequent walks and does regular strength workouts with her boyfriend, Steve, and uses the cardio machines at cardiac rehab.

“There is a lot of variety, which I appreciate,” she said. “Cardiac rehab has been incredibly helpful with this recovery process.”

It is possible that she may need surgery in the future if and when her new valves show functional deterioration. Otherwise, Reda expects Thompson will lead a normal life.

“Dr. Reda literally saved my life, and I am forever grateful,” Thompson said. “This experience has only solidified my belief that no matter where you work within the UK community – in the statistics department or in the cardiovascular clinics at UK HealthCare – collaboration is key to success, as well as a great surgeon.”