LEXINGTON, Ky. (April 24, 2018) – It was an ordinary day for Keisha Johns and her 6-year-old son Daniel "DJ" Johnson of Louisville. It was Dec. 9, 2017, and she met DJ at the bus stop after school and drove him to meet up with his father Calvin, who would take him to Lexington for the weekend. Keisha had already returned to Louisville when she got a call from Calvin two hours later.

Calvin asked her if DJ had ever had a seizure. Once, Keisha said, when DJ had a high fever. But this time was different. DJ said his leg was hurting, as was his head, neck and back; then he collapsed. When Calvin couldn't keep DJ awake, he took him to the Makenna David Pediatric Emergency Center at the University of Kentucky Albert B. Chandler Hospital. Keisha rushed from Louisville to meet them.

A MRI scan revealed DJ had hydrocephalus, or an excess fluid around the brain. The source of hydrocephalus is usually within the brain, but aside from the excess fluid, the MRI didn't reveal anything abnormal.

After a number of other tests, Dr. Brandon Miller, pediatric neurosurgeon at Kentucky Children's Hospital (KCH), discovered DJ had a dural arteriovenous fistula, an abnormal connection between arteries and the veins, near the base of DJ's spine. The fistula had been leaking blood into his spinal fluid to his brain, which caused the hydrocephalus. Days later, after the fistula had been successfully treated, Miller noticed DJ suddenly couldn't speak or move on his right side. Emergency tests showed a sudden constriction of the blood vessels around his brain, called a vasospasm. Six-year-old DJ had a stroke. After a procedure to restore blood flow to the affected area, DJ quickly improved.

It was this convergence of conditions — the fistula combined with the vasospasm — that make DJ's case unique. UK HealthCare's Chandler Hospital proved to be the perfect place for a case as complex as DJ's.

"I'm not aware of any other cases like this," said Miller. "One thing that makes UK different from other hospital systems is that we have both the adult and children's hospital under one roof. In cases like DJ's, where we need access to a certain specialty, everything is in the same building. So we were able to get the right tests and the right people involved right away."

"He was a normal six-year-old the day before," said Keisha. "But while he was in the hospital, he was different. He wouldn’t smile, he wouldn’t laugh, he really didn’t want to be bothered."

DJ was at Kentucky Children's Hospital for over a month, including spending both Christmas and New Year's in the hospital. Keisha credits the doctors, nurses and staff with helping DJ and his family cope with the uncertainty of his condition and celebrate his milestones.

"I called our primary care doctor the day after DJ was admitted, and she said DJ was in the best care that he could be in," said Keisha. "The doctors and nurses were amazing. I never had to ask for anything. They kept us up with everything when we couldn't be there."

As a certified nursing assistant, Keisha was equipped with the knowledge and skills to help DJ when he was in the hospital.

"Being a nursing aid, I feel like was beneficial for the situation because there wasn’t really much I could do for DJ while he was sick," she said. "So if all I could do was give him a bath and make him feel comfortable then that made me happy.”

After being discharged from KCH on Jan. 10, DJ spent a month in a rehabilitation facility in Louisville to regain his strength. Now he's back at school and planning his seventh birthday party. Aside from the occasional headache, DJ has no impairment.

Dr. Chris Spears, a resident on Dr. Miller's team, met with DJ and his mother three months after DJ's discharge.

"There's no way that's the same kid," said Spears, watching DJ run full speed inside the lobby in UK Chandler Hospital. "I thought it was his sibling. It's great to see him running around and making a great recovery, more than we initially expected."

"We know children recover faster than adults," Miller said as he watched DJ run. "For patients as sick as he was, to have 80 or 90 percent recovery is spectacular. But I wouldn't have expected this."

DJ is back in school, running with his friends and wrestling with his brothers and cousins. He remembers his stay at KCH, how the doctors, nurses and Child Life staff made it fun. When asked what he wants to be when he grows up, he says he wants to be a doctor. Or a Power Ranger.

Meanwhile, Keisha is grateful to have the chance to celebrate DJ's next milestone.

"It means everything to me to see him turn seven," she said. "I don't know what I would have done if I had lost him." 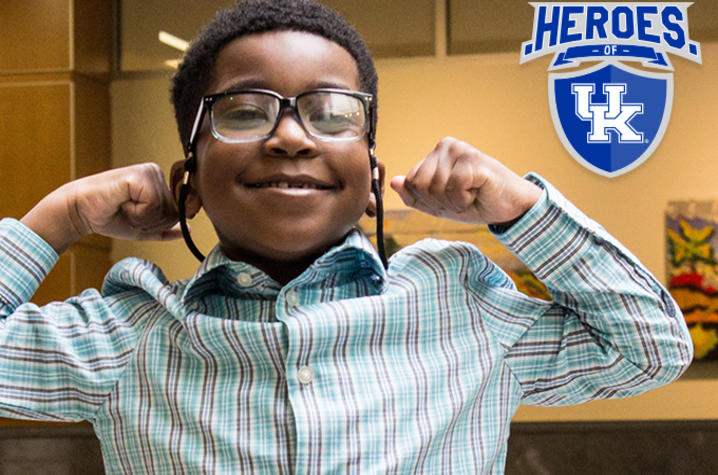 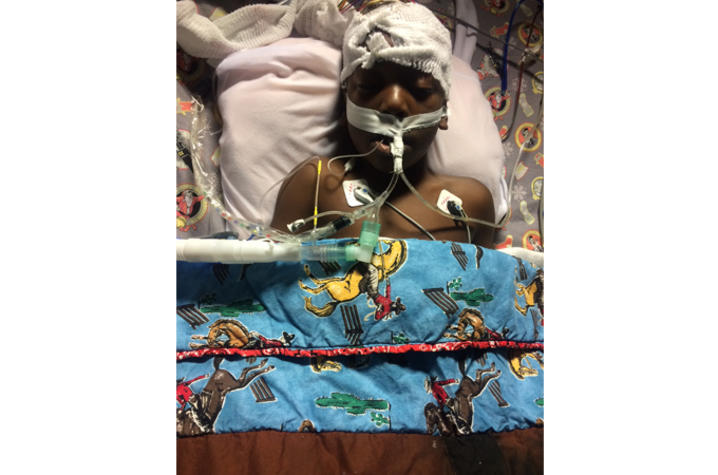 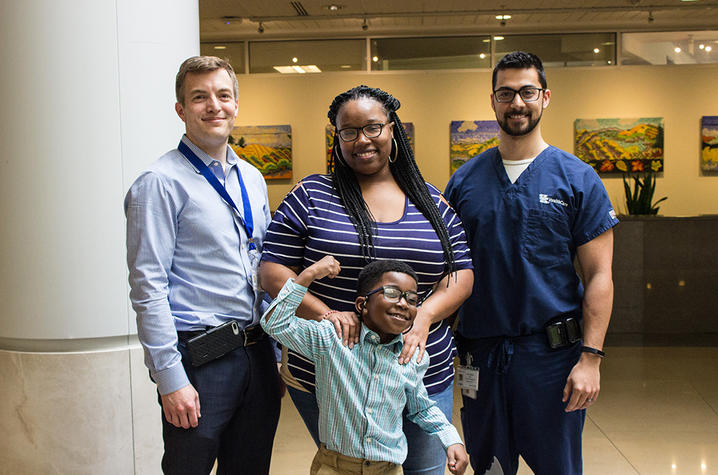