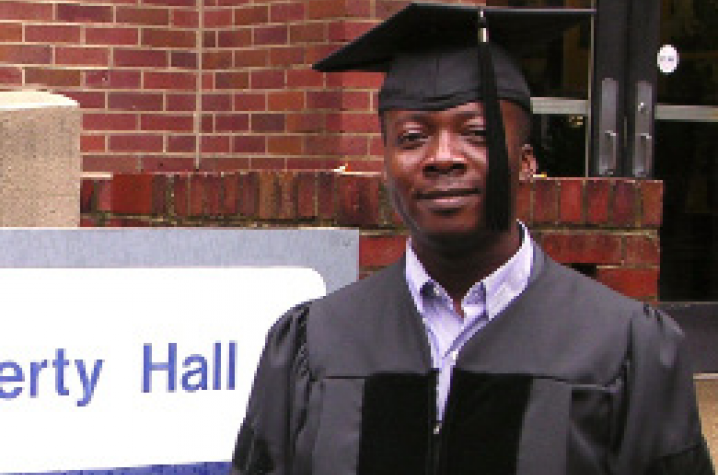 To view a transcript of this video, click here.

LEXINGTON, Ky. (May 3, 2012) —For Fraternel Amuri Misako, pursuing a Ph.D. at the University of Kentucky amounts to much more than enhancing his career. It represents his freedom to conduct his important research without the threat of political persecution.

A visiting scholar from the Democratic Republic of the Congo, Amuri came to UK in 2010 through the Institute for International Education’s Scholar Rescue Fund, an organization that aides scholars whose academic freedom and physical safety are threatened in their home countries.

He recently defended his landmark dissertation through a tri-national committee, consisting of two faculty members from UK, two from France and two from Congo, coordinated via videoconferencing.

Amuri's research, which focuses on rural populations, mostly young men, children as combatants, began long before he came to the U.S. However, in 1998, one week before Amuri was scheduled to graduate and receive his bachelor's degree in political science and administration, the Second Congo War erupted, postponing his graduation.

The subsequent conflict became the base of Amuri's research interests.

"From these events of wars, I got inspiration of doing my research focused on social movements linked to violence and religion in eastern Congo," Amuri said. "In particular, I was interested in militias called Mai Mai who were fighting the rebels supported by the Rwandan army. Those militias were basically rural populations living in isolated areas, poor and facing more challenges about the social problems like health care, education, economic problems related to roads, access to manufactured goods, and exploitation of minerals, and the security matters."

Amuri was unable to publish his research in the Congo, however, for fear of castigation from either the rebels or the government.

"How we could be dealing with the problem of academic freedom in the Congo," Amuri said. "During the war we couldn’t really be working as a scholar because everyone could just be aware of how the rebels were ready to kill."

However, in 2010, through the IIE Scholar Rescue fund, which provides matching grants for institutions to host a scholar for one year with potential for renewal, Amuri became a part of the UK Department of Anthropology in the College of Arts and Sciences. With his strong background in the social sciences and the interdisciplinary nature of his research, which combines the aspects of anthropology and political science, he began learning English and later teaching courses.

Live-streaming from Lafferty Hall, Amuri appeared in his cap and robe to over 150 of his family members and supporters in the Congo, and his sister sang a victory song in celebration of his achievement.

Amuri's wife and four children will attend the Commencement ceremony on Sunday, when he will officially receive his Ph.D.

"So this can help me really be mentally, psychologically speaking as a real doctor, yes," Amuri said. "And for my family it’s a big joy, a joy to see me working alongside other doctors."

Amuri will conduct his post-doctoral research at UK as well.

"I have to say honestly the University of Kentucky has chosen me and I accepted," Amuri said. "Now I can say I have chosen UK, but at the beginning, at the origin, UK has chosen me, and I am thankful."

All UK Commencement Ceremonies take place Sunday, May 6, at Rupp Arena. The first ceremony of the day, which begins at 9 a.m., will be for all graduate and professional students. The second ceremony, which begins at 1 p.m., recognizes undergraduates from the colleges of Agriculture, Gatton College of Business and Economics, Education, Engineering and Nursing. At 6 p.m., the third ceremony will honor undergraduate from the colleges of Arts and Sciences, Communications and Information Studies, Design, Fine Arts, Health Sciences and Social Work.

Family members and friends unable to attend the Commencement Ceremonies can watch the events live online on UKNow, www.uky.edu/uknow.  Live-streaming will be available for all three ceremonies.