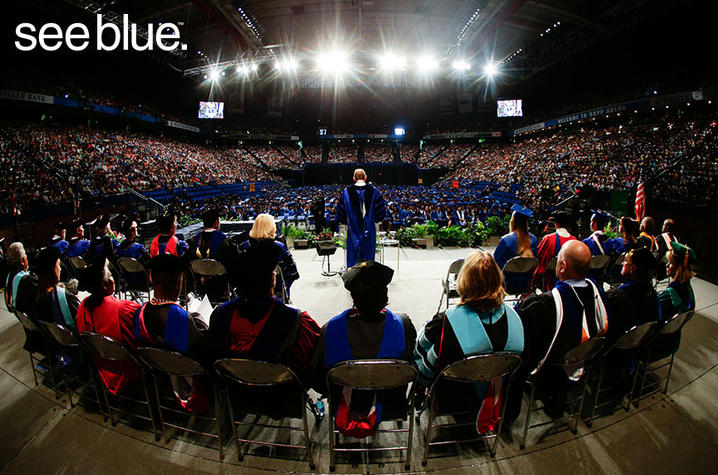 The May 2016 Commencement Ceremonies will be livestreamed here Sunday, May 8. Please ensure your computer or device's software is up to date.

LEXINGTON, Ky. (May 6, 2016) — This Sunday, the University of Kentucky May 2016 Commencement Ceremonies will recognize the accomplishments of undergraduate, graduate and professional students who will have completed their degrees by the end of the spring 2016 semester. Undergraduate degrees will be conferred at 9 a.m. and 2 p.m., and graduate and professional degrees will be conferred at 7 p.m.

All ceremonies will be streamed live on UKNow.

While all graduates are celebrated for their tremendous achievements, many have particularly interesting stories to share about their lives and time at UK. This includes former UK football player Randall Cobb, who will be the first person in his immediate family to graduate with a college degree. Cobb, who plays in the NFL for the Green Bay Packers, will earn a degree in community and leadership development from the UK College of Agriculture, Food and Environment.

Chris Stewart transitioned from being a professional violinist in Los Angeles to a law student at UK. As a blind person, he used his musical knowledge and skills to help him critically analyze components of the law.

UK President Eli Capilouto will introduce noted African-American scholar and President of Prairie View A&M University George C. Wright to deliver formal commencement remarks at both the 9 a.m. and 2 p.m. undergraduate ceremonies. A native of Lexington, Wright received his bachelor’s and master’s degrees in history from UK and his doctoral degree in history from Duke University. In 2004, he was awarded an honorary doctorate of letters from UK.

Wright's teaching experience began in 1977 as an assistant professor at UK. In 1980, he began teaching at the University of Texas at Austin where he would eventually become a full professor and holder of the Mastin Gentry White Professorship of Southern History. He received the top teaching award in the College of Liberal Arts and the College of Natural Sciences, the Jean Holloway Award for Teaching Excellence, and the top teaching award for the entire university, the Lillian and Tom B. Rhodes Centennial Teaching Fellow, which garnered him a $10,000 prize. In 1993, he joined the faculty at Duke University as vice provost for undergraduate programs, director of the Afro-American Studies Program and held the William R. Kenan Jr. Chair in American History. Wright has authored three books on race relations.

A student will also address the audience at each of the undergraduate ceremonies, as per UK tradition.

The University of Kentucky will award honorary doctorates at the 2 p.m. and 7 p.m. ceremonies. The recipients include:

Read more about the May 2016 UK Honorary Degree recipients here.

All three ceremonies will be streamed live at www.uky.edu/uknow, the university’s news website. Full video of each ceremony will be available within two weeks after Commencement on the university’s YouTube channel, www.youtube.com/universityofkentucky.

Social media users are encouraged to use the hashtag #ukgrad.