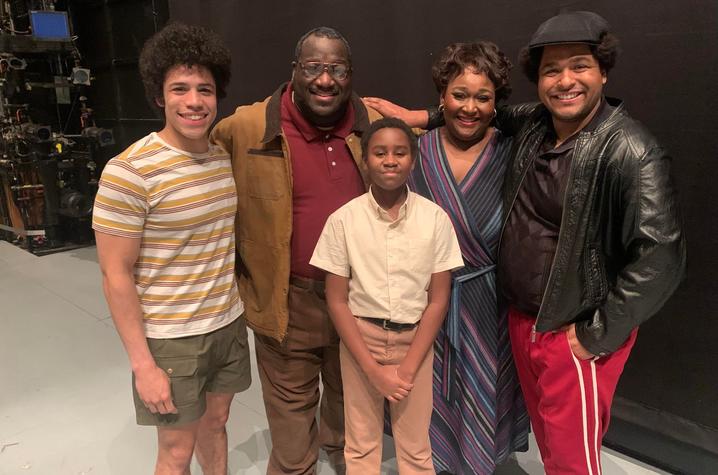 LEXINGTON, Ky. (April 7, 2022) — For the last two weeks, the vocal talents of four University of Kentucky opera alumni have been featured on stage in the Lyric Opera of Chicago’s production of “Fire Shut Up in My Bones” — a modern opera that is quickly becoming known as a cultural phenomenon.

“Fire Shut Up in My Bones” is Grammy Award-winning jazz musician and composer Terence Blanchard’s adaptation of Charles M. Blow’s moving memoir by the same name. Featuring filmmaker Kasi Lemmons’ libretto, “Fire Shut Up in My Bones,” tells a poignant and profound story about a young man’s journey to overcome a life of trauma and hardship. The production challenges audiences with contemporary topics of race, spirituality and sexuality, musicality rooted in jazz and stunning movement — distinguishing the piece from many traditional opera productions.

The four Wildcats lending their voices as part of the cast and chorus of “Fire Shut Up in My Bones” in Chicago include contralto La'Shelle Allen, Kenneth La’Ron Hamilton, baritone Chris Kenney and baritone Reginald Smith Jr.

In addition to the alumni, Benjamin Preacely, son of UK School of Music lecturer Michael Preacely, portrays the child version of the main character, Charles, in the production.

"We are so proud of our students who are performing in this production at the Lyric Opera of Chicago" said Everett McCorvey, director of UK Opera Theatre. "'Fire' has taken the world by storm and many companies are considering producing this work, so it's very exciting that our alumni are performing at both the Metropolitan Opera of New York and now at Chicago Lyric. In many cases, especially for new contemporary opera productions, companies will hire the performers who debuted the role. We are always proud of our students' successes, and thrilled to see them thriving in this field and promoting the art of opera."

Last fall, six UK alumni, including Chris Kenney, made history by performing “Fire Shut Up in My Bones” at the Metropolitan Opera in New York. This marked the Met’s staging of its first opera by a Black composer. Read more here.