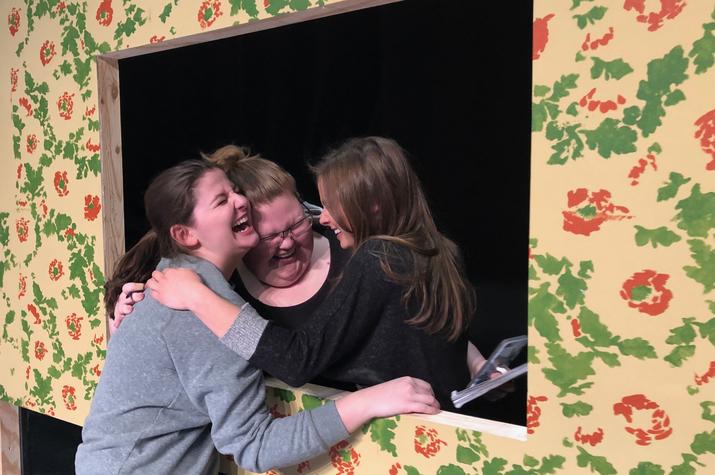 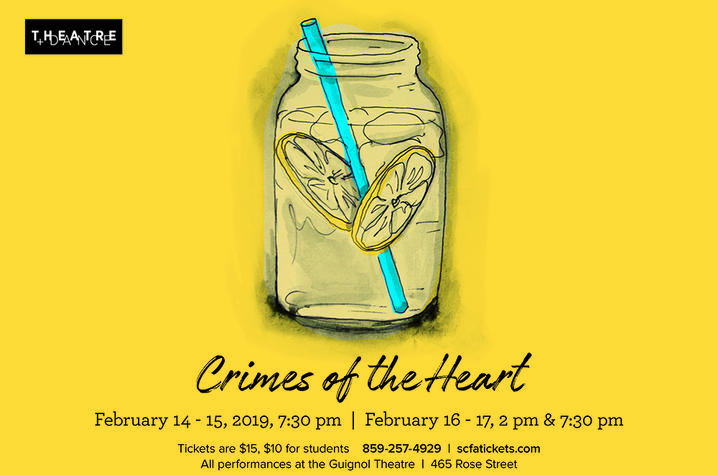 LEXINGTON, Ky. (Feb. 13, 2018) — Just in time for Valentine’s Day, University of Kentucky students will take to the stage with a Pulitzer Prize-winning tragicomedy, Beth Henley’s “Crimes of the Heart,” running Feb. 14-17, in the Briggs Theatre.

Directed by Peter Stone, the fourth production in the UK Department of Theatre and Dance 2018-19 Mainstage Season follows the three conflicted Magrath sisters as they lament their traumatic childhood in Mississippi and question the possibilities of their family's future. In the end, Lenny, Meg and Babe remind us all that blood is thicker than sweet tea.

Senior Kelsey Waltermire, who plays Meg Magrath, says that “Crimes of the Heart,” is a play all about love. “There is love seen on every page, but it's not represented in the stereotypical puppy love romance arc. We see the kind of passionate, frustrating, complicated, strong love which is rooted in sisterhood. Rehearsing this play has been such a gift to me personally, because I am one of four sisters and the themes and struggles at the core of this piece are true to my life.”

Waltermire explains, “In Shakespeare's ‘Hamlet,’ Hamlet describes the actor's role of ‘holding the mirror up to nature,’ and I have acted in few plays where I've felt this strong of a connection to reflecting nature. ‘Crimes of the Heart’ is a dark comedy, which I think perfectly depicts what family life is like. We hold onto our sisters and laugh during the moments of happiness, we cry with each other when one of our sisters is experiencing pain and tragedy, and sometimes we experience these emotions back-to-back.

“In a world where everyone seems divided in one way or another, ‘Crimes of the Heart’ is a wonderful reminder that loving and caring for one another, in spite of our extreme differences, is how we heal and grow.”

Waltermire is an actor represented by Heyman Talent Agency and is a member of the Equity Membership Candidate Program. She played the female lead role of Carol Collins in the premiere of the award-winning musical “One More Fine Day” at the Midtown International Theatre Festival. In addition to performing in New York City, Waltermire has also performed extensively throughout Central Kentucky. Her local credits include Woodford Theatre’s “Translations; On the Verge’s “The Cherry Orchard” and “Much Ado About Nothing”; UK Theatre’s “Henry V” and “The Yellow Wallpaper”; Studio Players’ “Wait Until Dark” and “Dracula Bites”; Antagonist Productions’s “Taming of the Shrew”; and Off Main Actors Group’s “Smoke on the Mountain.”

In the coming months, Waltermire will play Annie Sullivan in “The Miracle Worker” at Studio Players, followed by a turn as Molly Astor in “Peter and the Starcatcher” at Woodford Theatre.

An alumna of the Governor’s Scholars Program and Lexington’s School for the Creative and Performing Arts, Waltermire is also pursuing minors in political science and English in addition to her bachelor’s degree in theatre.

Stone is an actor, director, writer and teacher. He began his career in Los Angeles, and he has worked extensively in New York City in film, television and theatre. In the theatre world, he has performed regionally and off-Broadway. Currently an assistant professor at UK, Stone was the former chair of Acting for Film at the New York Film Academy in New York City. In 2017, he launched NYFA’s new campus in Mumbai, India, and has taught with the academy in Florence, Italy, for 10 years. Stone has been a guest instructor at Dongguk University in Seoul, Korea; at Universitat Heidelberg, in Germany; and at Nuova Accademia di Belle Arti in Milan, Italy (“Matter of Identity Conference”).

As a playwright, Stone co-wrote the critically acclaimed play “Unnatural Acts,” which premiered at Classic Stage Company in New York City in 2011. For his efforts, he received a 2012 Drama Desk Award for Outstanding Play nomination, a G.L.A.A.D. Media Award nomination, an Off-Broadway Alliance Award nomination, and an Honorable Mention for Top 10 Plays of 2011 by The Advocate. His new play, “Everygirl,” premiered in January 2019 at Kallio School of Performing Arts in Helsinki, Finland.

Stone, who holds an MFA in acting from the American Conservatory Theater in San Francisco, is a founding member of Plastic Theatre Company in New York City, and a member of Actors' Equity Association and the Screen Actors Guild‐American Federation of Television and Radio Artists.

Audiences can fall in love with “Crimes of the Heart” 7:30 p.m. Thursday and Friday, Feb. 14-15, and 2 p.m. and 7:30 p.m. Saturday and Sunday, Feb. 16 and 17, in the Briggs Theatre located in the Fine Arts Building. Tickets can be purchased at the Singletary Center for the Arts ticket office, by phone at 859-257-4929 or online at www.scfatickets.com. General admission tickets are $15 and student tickets are $10 with a valid UK student ID. A transaction fee and sales tax will be added upon purchase.

The play is being presented by special arrangement with Dramatists Play Service Inc. in New York.

The Department of Theatre and Dance at UK College of Fine Arts has played an active role in the performance scene in Central Kentucky for more than 100 years. Students in the program get hands-on training and one-on-one mentorship from the renowned professional theatre faculty. The liberal arts focus of their bachelor's degree program is coupled with ongoing career counseling to ensure a successful transition from campus to professional life.