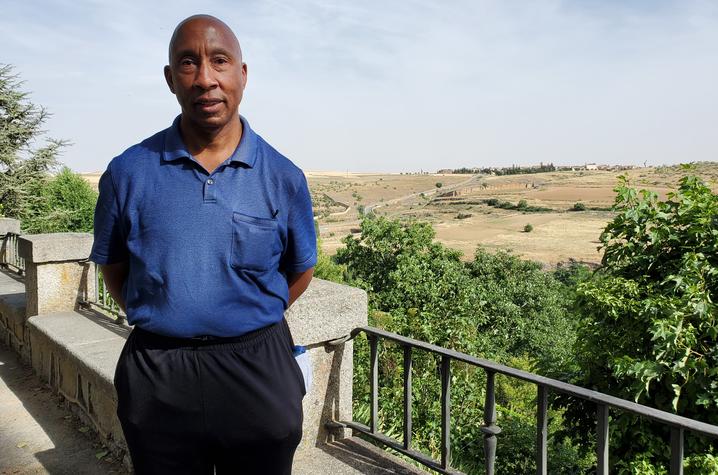 “I was talking to this guy, I don’t even remember how we started talking, and he mentioned this program where adults older than 65 could take courses free of charge. I just remembered that, and it stuck with me. Now, 10 years later, here I am.”

At the time, Robert Williams was working in shoe repair and thinking about what retirement might look like. As he approached his 65th birthday, his mind turned to that chance interaction, and he started doing research.

In his research, he came across the Donovan Scholarship at the University of Kentucky, which waives tuition and mandatory course fees for adults 65 years and older.

Now, at age 66, Robert Williams is a UK Donovan Scholar.

“I’m loving it so far,” Williams said. “It’s a dream come true to be a student here at the University of Kentucky.”

This summer, Williams also embarked on an education abroad program in Spain. “I always wanted to travel abroad, and here was this fantastic opportunity,” Williams said.

As a lifelong student in craftsmanship and art, traveling through Segovia and Madrid proved inspiring and life changing for Williams. After the program ended, Williams decided to pursue that passion by becoming a degree-seeking student in the UK College of Fine Arts' art studio program, taking classes with students more than four decades younger than him.

“I didn’t know what to expect when I walked into that first class,” Williams said. “But the first thing that stood out and continues to amaze me is how welcoming the students here are. They welcomed me and everyone else in the class. It’s like we’re all in this together. We have this one thing in common. We’re all Wildcats.”

Williams looks forward to continuing his education as a Donovan Scholar and eventually walking across the stage to receive his UK diploma.

“I keep waiting, and I’m still waiting for the catch,” he said. “There must be a catch, right? All of this is too good to be true.”

Learn more about the Donovan Scholarship at www.uky.edu/olli/donovan-fellowship.